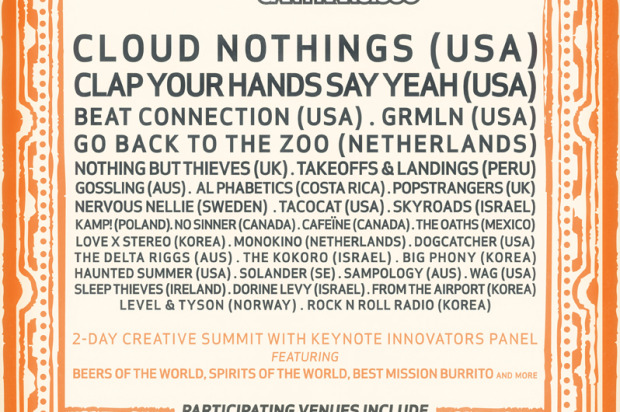 Los Angeles’ flagship international festival has made its way up the coast. SF is hosting its first-ever Culture Collide today and tomorrow, which includes a creative summit for the many international artists and fans in attendance. Its founder, Alan Miller, began the festival five years ago with Filter Magazine, which he’d co-founded in 1999. Alongside his passion for music, he says the festival came out of his spirit of wanderlust. “It’s music from the eyes of a traveler,” Miller tells the Appeal.

Miller and co, which now operate under the COLLiDE umbrella, work alongside artists, labels, and even government to secure spots for acts from as far off as New Zealand. International acts tend to be paired with local bands as a means of cultural exchange and to further Culture Collide’s crash course in bridging the gap between musicians and their far-off fans.

“Everything we’re doing is intimate,” Miller says. “It’s a dose of experience. Everyone who works for the company makes it a collaborative effort.”

Such efforts have gained Culture Collide the internationally acclaimed Netherlands act Go Back to the Zoo, who Miller’s been eying for quite some time. The infectious indie rock act cemented their lineup after meeting their bass player at a Strokes show and have similar qualities as the “Last Nite” band. What has consistently struck Miller isn’t so much the similarities between acts as the differences between their government support.

Miller consistently cites the European Union and Canada as being highly progressive and generous in their efforts to give musicians and artists a leg up either through grants or platforms with which to display their work. “Unlike the US, the EU has a system set up to export culture. They provide funds and opportunities to homegrown artists. It inspires a lot of great young artists to go out. It’s not something our country is invested in, though,” Miller laments.

Culture Collide thus hopes to help facilitate the type of interactions that make it easier on artists the world over to reach a global audience. Their creative panels are educational to both musicians and fans, with one panel in particular drawing an exceptional following: the Beers and Spirits of the World. It’s there that Miller and co tried the Swedish staple Wściekły Pies, or Mad Dog. (but not that Mad Dog)

“It’s this crazy vodka drink with tabasco,” Miller explains. “We’ll tell bands to bring what you drink so you get drinks from Poland and Singapore and Hong Kong. Some governments even come with presentations. Israel usually brings wine.”

Culture Collide is happening October 14-15. For tickets and more information, head to culturecollide.com/festivals/sf