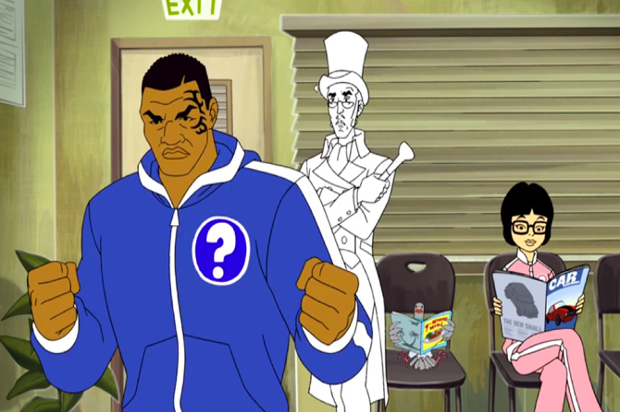 Halloween to me means 24 Hours of Werewolf Bar Mitzvah and hoping nobody notices the glow from the television in my living room and knocks on my door looking for candy.

Mike Tyson Mysteries (10:30pm, Adult Swim, series premiere)
The best thing about the Hanna-Barbera-esqe Mike Tyson Mysteries is that it would have been easy for the show to phone in any semblance of a show with jokes and craft, and instead have leaned entirely on the absurdity of Mike Tyson! Solving! Mysteries! Instead, the pilot is about Cormac McCarthy recruiting Mike Tyson to find an ending to his unfinished novel, and I have a very good feeling we are in good hands. Also, the subtle tics to Mike Tyson’s past: A pigeon voiced by Norm MacDonald (alluding to Tyson’s time raising pigeons), and the ghost of Marquess of Queensberry (the 9th Marquess of Queensberry founded the modern rules of boxing) voiced by Jim Rash.

Tuesday, October 28
Degrassi: The Next Generation (9pm, TeenNick, season premiere)
The storied Degrassi franchise is one of those shows I haven’t watched (but should try to start), so all the show really is to me is a trivia talking point that this was the show that launched (or rather wheelchaired) the career of Drake into the consciousness of the world. Which would eventually leave him empty after receiving a lap dance from Nicki Minaj. Yes, the clip says MTV Canada, but in America, it’s on TeenNick.

Prison Wives Club (10pm, Lifetime, series premiere)
At first blush, I was thinking it was part of a burgeoning “wives” franchise a la Lifetime other wives show, Army Wives (canceled last year). The truth of the matter is that the reality show is less Army Wives, no First Wives Club, and more Real Wives of Those Who are Currently Spending Time in a Penitentiary.

Benched (10:30pm, USA, series premiere)
Much like seeing a cast member from the The Wire or Band of Brothers in other shows, I always get excited when I see a cast member from Happy Endings on a new show, despite the fact that Happy Endings should still be on the air, and maybe in enough alternative universes Happy Endings is the number one show on TBS. Eliza Coupe stars as one of those high-powered attorney types, who after a high-powered public nervous breakdown and subsequent fall from grace ends up as a public defender. Also stars The Office’s Oscar Nunez and comedian extraordinaire Maria Bamford!

Wednesday, October 29
A Poet in New York (8pm, BBC America)
The BBC Telefilm about the life of poet Dylan Thomas makes its way to BBC America. (Sidebar: I have a bad feeling about AMC taking 49.9 percent stake in BBC America.)

Elementary (10pm, CBS, season premiere)
Having the successful Sherlock Holmes riff Elementary cap off Thursday night is just the icing on the cake for CBS, frankly. At least Elementary is actually good-good. (and not just good despite being on CBS, or good for CBS)

Friday, October 31
Ancient Aliens (9pm, H2, season premiere)
I’m not saying it’s aliens, but this show is going after four years. What is this, the Diners, Drive-Ins, and Dives of alien-baiting shows?

Saturday, November 1
2014 Breeders Cup (5pm, NBC)
The Breeders Cup just sounds like something a homophobic, gay panic baiting dystopian science fiction writer would call a Hunger Games-esqe competition between the only heteronormative people left on Earth after “the gays” take over the planet.

Sunday, November 2
Olive Kitteridge (9pm, HBO, mini-series premiere)
HBO is getting ready for award season with the two-night, four-part miniseries starring Frances McDormand, ill Murray, Richard Jenkins, John Gallagher Jr and directed by Lisa Cholodenko (The Kids Are All Right). Based on the 2008 Pulitzer Prize winning novel by Elizabeth Strout, the novel spans 25 years, looks at the life and times living in the coastal town of Crosby, Maine through the eyes of the titular Olive Kitteride.