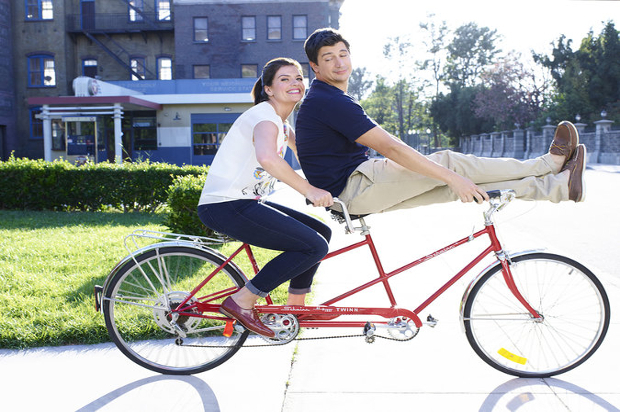 Monday, October 13
Jane the Virgin (9pm, The CW, series premiere)
Despite the batshit crazy premise of a virgin accidentally getting artificially inseminated (This is adapted from the 2002 Venezuelan telenovela Juana la Virgen, after all), critics have been falling head over heels for the pilot, with its strongly defined characters and a breakout performance from lead Gina Rodriguez. Last Tuesday The CW beat both ABC and FOX in primetime. I’m sure The Flash helped, but it looks like CW is really starting to come into its own. So hey, CW. Good hustle, kid.

Tuesday, October 14
Marry Me (9pm, NBC, series premiere)
If another romantic comedy sitcom (rom-com-sitcom?) has to come down the pipe this season, at least having Happy Endings’ Casey Wilson and Party Down’s Ken Marino is a great start. Creator David Caspe (of the still loved and longed for Happy Endings) loosely based the show on his relationship and subsequent engagement to star Casey Wilson, whom he married this past May.

Chrisley Knows Best (10pm, USA, season premiere)
USA’s Southxploitation family-cum-sitcom-cum-reality show about some wealthy family in Georgia with a patriarch who spouts in folksy metaphor and rhyme. All I know about this show is USA saturating its commercial blocks with previews for the new season during Monday Night RAW. (Oh, and star Todd Chrisley will be on Monday Night RAW tonight because synergy. And because Hoda and Kathie Lee Gifford on RAW last week wasn’t awful enough)

The Getaway (9pm, Esquire Network, season premiere)
If you like celebrities (and who doesn’t) and if you like travel shows (I’m sure somebody has a tattoo of Anthony Bourdain eating sushi on their person), than you’ll love Esquire Network’s The Getaway, which features the celebrities traveling! Zero Point Zero produces The Getaway, the same fine folks who produced Anthony Boudain’s No Reservations and Parts Unknown, so you can expect some real craftman type stuff when it comes to shows like this. Also, in season Kyle MacLachlan (of all you people’s TWIN PEAKS IS COMING BACK IN 2016 fame) will be in Napa.

Thursday, October 16
Midnight Feast (10pm, FYI, series premiere)
Too bad Comedy Central’s @midnight has the at midnight slot on lock, because there seems something off about having a show called Midnight Feast air at 10pm. But, semantics. Hosted by former Top Chef contestant Spike Mendelsohn, and it takes place New York’s Chelsea Market with media trained chef types (or those who answered a casting call) food competition-ing it up having free reign over the market.

Friday, October 17
Foo Fighters: Sonic Highways (11pm, HBO, series premiere)
After Dave Grohl’s well-received Sound City documentary, Grohl (and the rest of the Foo Fighters) are going to Chicago, Austin, Nashville, Los Angeles, Seattle, New Orleans, Washington D.C. and New York to discover its musical and cultural heritage, all the while working on their eighth studio album, the titular Sonic Highways (coming in November). It’s kind of an Anthony Bourdain No Reservations/Parts Unknown with Grohl in the Bourdain role, and instead of food, it’s music.

Saturday, October 18
Transporter: The Series (9pm, TNT, series premiere)
Transporter: The Series is the television adaptation of the Luc Besson-penned, Jason Statham franchise. It also makes me think that all television in Europe is just adaptations of Luc Besson films (This summer’s Taxi Brooklyn on NBC was brought over from overseas and based on a Luc Besson film). Of course Jason Statham isn’t in this, why would he be in this, we’d be hearing about this show a lot sooner if he was.

Black Dynamite (10:30pm, Adult Swim, season premiere)
The continuing adventures of Black Dynamite in cartoon form is one of the few spin-offs from movie properties that actually live up to the promise of the film.

Sunday, October 19
Manhattan (10pm, WGN America, season finale)
Manhattan was one of the surprise hits of the summer for me, the second in WGN America’s entry into scripted television. From Sam Shaw (who previously worked on Master of Sex), Manhattan modulates an ensemble period piece that operates like a Parks and Recreation but instead of building a park in Pawnee, IN, it is a bunch of scientists building the atomic bomb in the New Mexican desert, complete with the clashing of raging scientist egos, against the rub of the US Army, and the local natives, amidst World World II-era paranoia and top-level secrecy.

It should be noted that Olivia Williams also stars in Manhattan, and as a sensitive male who came of age in the late 90’s I am contractually obligated to mention how Wes Anderson’s Rushmore (which turned sixteen years old last week) was such an influential film for me.