SF Hangs Out In The Streets For Park(ing) Day 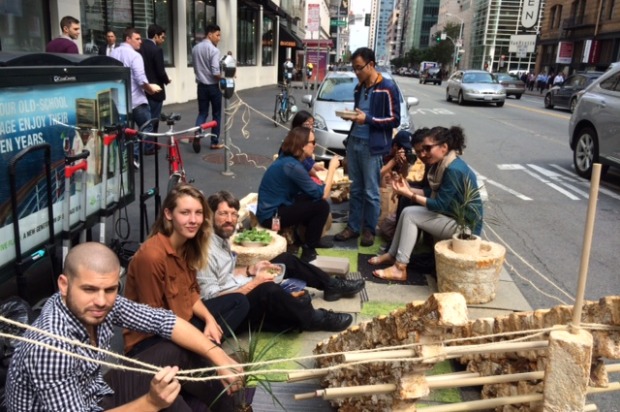 Metered parking spaces around San Francisco, and in cities around the world, were temporarily transformed into public parks and art installations today in observance of Park(ing) Day.

The meters at parking spots at the intersection of Mission and New Montgomery streets in the city’s South of Market district were being fed but were not available to vehicles today.

Shortly after noon, one of the coveted parking spots, located just outside an Academy of Arts building, was occupied by a group eating lunch, sitting amongst furniture and planters made out of mycelium, the strong organic fibers that form the root structure for mushrooms.

The biotechnology design company Mycoworks formulated the material, while the architectural design firm Mithun, crafted the designs for today’s parklet.

Caitlin Moorleghen, 24, a production assistant at Mycoworks who was eating lunch in the temporary park, said the $3.50 an hour parking spot was worth it because it gave the public a chance to see the material, which she said, is versatile and sustainable.

Moorleghen said the organic fiber is very strong. She said it is a self-assembling fiber that can be used as an alternative to synthetic materials across many industries.

Johnny Lemoine, a LEED-certified green associate at Mithun, who was enjoying the sunshine in a mycelium rocking chair installed in the parklet, said the material can be used for a number of architectural and interior design uses, such as tabletop veneers and building insulation.

Just, across the intersection from the mushroom-based park, was an equally desirable parking spot, transformed by the San Francisco beauty salon Morphic into a pop-up braiding station.

Their parking spot attracted a steady stream of people who were passing by on their lunch breaks and had stopped to watch a woman, known only as Brenda the Braider, at work. Others were waiting their turn for free braids.

This is Morphic’s fourth year participating in Park(ing) day.

How many parklets popped up today is anyone’s guess, due to the open-sourced nature of the event.

The idea for Park(ing) Day came in 2005 when the San Francisco art and design studio, Rebar, converted one metered parking space into a temporary public park in downtown San Francisco, according to event organizers.

Besides encouraging people to get outside and enjoy space usually occupied by vehicles, Park(ing) Day was designed to call attention to the need for more urban open space, while generating critical debate around how public space is created and allocated, as well as developing new ways to improve the quality of urban spaces, according to the Parking Day website.

The idea spread across the Internet and has evolved into a global open-sourced movement, with organizations and individuals creating new forms of temporary public space in their own communities.