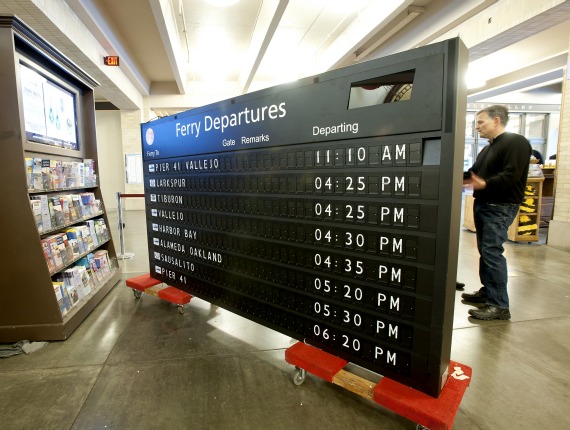 Riders planning to take ferries operated by the Golden Gate Bridge, Highway and Transportation District between Marin County and San Francisco on Friday will have to use an alternative form of transportation because of a one-day worker strike announced today.

The strike by ferryboat captains with the Marine Engineers’ Beneficial Association is in response to what the employees said are “unfair labor practices” that stand to threaten middle-class jobs.

Dave Nolan, a representative for the Marine Engineers’ Beneficial Association, stood among ferryboat captains this morning outside the San Francisco Ferry Building and announced to the public that they will go on strike on Friday.

Nolan said the association filed an unfair labor practice charge against the district with the state Public Employment Relations Board on Wednesday following months of negotiations. The five-month contract dispute with the bridge district has left employees without contracts since July 1.

The strike will last from 4:30 a.m. to 9 p.m. Friday with no ferry service between the Larkspur, San Francisco Ferry Building and Sausalito terminals, including during the San Francisco Giants game, according to Golden Gate Bridge Labor Coalition co-chair Alex Tonisson.

The issues that have been standing in the way of resolving the contract dispute between the bridge district and the 13-union coalition vary from union to union but cover issues such as wages, compensation for training and a proposed high-deductible health care insurance plan, among others.

Tonisson said the district’s 16 ferryboat captains will be on strike Friday and about 100 workers such as ferry machinists and deckhands are expected to stand in solidarity by not crossing a picket line that will be assembled at the Larkspur Ferry Terminal.

“The coalition as a whole is having problems with the district,” Tonisson said.

“The district has the money,” he said.

Tonisson said the district has projected surplus revenue of roughly $138 million over the next five years.

Arthur “Art” Gonzalez, a representative of the Machinists Automotive Trades, one of the 13 unions represented by the coalition, said he was upset at the district’s negotiations.

He said a one-day strike by machinists on the Golden Gate Bridge over employee health care was held on Sept. 16, but didn’t motivate the district to negotiate in good faith.

That strike did not affect public transit or bridge traffic, Gonzalez said.

He said he hopes Friday’s strike will send a clearer message to the district.

Bridge district officials said they are continuing to negotiate in good faith with the unions and have another bargaining session planned for Monday.

Bridge district spokeswoman Priya Clemens said she estimated about 9,000 people will be impacted by the ferry service disruption on Friday, but expects buses to be running.

“It could be a very difficult day for traffic tomorrow,” Clemens said.

Ferrbyboat Captain Robert Farley said the strike was the “last thing we wanted to do.”

Farley said he realizes the negative impact the action will have on Bay Area residents but said he has to stand up for middle-class jobs in the Bay Area that “are critical and must be saved.”

He said ferryboat captains are responsible for the safety of thousands of passengers and that he takes his job seriously, but said he also has to take his livelihood seriously and he feels that is in jeopardy.

The announcement of the strike ended with a chant by the ferryboat captains that went: “When ferry boat captains are under attack, what do we do? Stand up fight back.”

Nolan said the ferryboat captains in particular are distressed over the district’s refusal to offer compensation to its captains for onsite training of new hires as well as outside training necessary for job proficiency.

He said the captains are looking out not only for each other, but also for the public.