For The Fans: Pippin 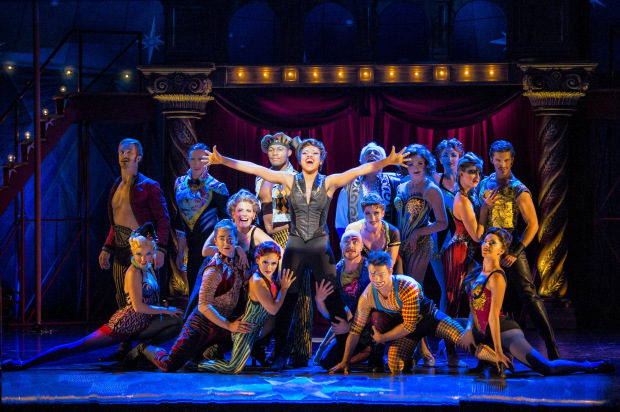 I’ve gone to a lot of musicals in the past year or so, but the majority of them have had pretty simple stories, and songs I already knew: your standard “jukebox” musical, which seems to dominate the Broadway stage these days. Pippin is a “classic” musical: original songs; a story loosely based on history; and that sometimes uncomfortable mix of drama and flair that you can either accept, if you’re a fan of musical theater, or have a hard time with, if you’re not.

Pippin was first staged in 1972, with choreography by Bob Fosse, and songs by Stephen Schwartz, and if you look back at clips from that original run (which starred Ben Vereen) it just oozes 1970s theatricality, in all its tackiness. The version currently running at the Golden Gate Theater through October 19th ran on Broadway last year, and won a Tony for best musical revival. It hasn’t been updated so much as brightened. Gone are the shabby monotone costumes of the rag tag group of “performers” from 1972, replaced by colorful circus clowns, acrobats, and contortionists, and the setting has been moved under a bright blue big top. Still in abundance, however? Jazz hands. Lots and lots of jazz hands.

Pippin’s the hero of the story, a prince in a roughly medieval era, on a quest to find his ultimate fulfillment in life. Guiding him through this journey is the Lead Player–a kind of circus ring leader–and the players themselves, who often represent life’s vices: play instead of work; hedonism above responsibility; sex without love. Pippin goes to war, becomes king, realizes that’s a little too much work, and continues on his quest until he eventually meets a widow and her son, and settles in with them, still unfulfilled.

Matthew James Thomas, who played the role during its Broadway run, is Pippin, and he infuses the role with a loose-limbed nerdiness, his hair always in his face, and his jeans and long sleeved t-shirts hanging off him; his Pippin always looks appropriately out of place.

The Lead Player role originated by Ben Vereen is now played by a woman, and I was excited to see Sasha Allen in the part. I first noticed her in a little indie movie called Camp back in 2003. Her performance in that film always stuck with me, and I’m glad to say she’s even better in Pippin. Her singing and dancing are terrific, and she has some surprisingly strong dramatic moments during the show’s finale.

John Rubinstein, who originated the role of Pippin back in 1972 now plays the role of Pippin’s father, Charles, in a nice bit of circular casting. Luci Arnaz has a showstopping number as Pippin’s grandmother Berthe, singing “No Time at All,” that almost brought the audience to their feet. (Starting October 6th, Tony-winner Andrea Martin replaces Arnaz in the role, while Arnaz joins the Broadway cast.)

This revival’s circus theme has some San Francisco ties, as local Pickle Family Circus alum Gypsy Snider is behind that bit of magic. And to be sure, there are some great stunts, and awe-inspiring moments during the show’s two-hour running time: fire; knife-throwing; balancing acts; lyrical performances on hoops over the stage. But there are also long bits where the story drags. Pippin, at times, comes off as a whiny rich boy, and the ultimate source of his happiness (if he can even call it that), doesn’t feel genuine. There’s an old moral being told, about how you can find happiness in your own back yard, but Pippin’s choices feels like weighing drudgery over the creepy world of a circus: neither seems that great!

Fans of the original musical are unlikely to be disappointed with this version, though. There are no blasphemous changes, (the biggest comes at the show’s very end, but even Schwartz has said he prefers the newer version), and the show’s mix of anachronisms, fourth-wall-breaking, and Fosse-influenced dance remains. But if you aren’t someone who enjoys the genre, don’t look to Pippin to change your view on that front.