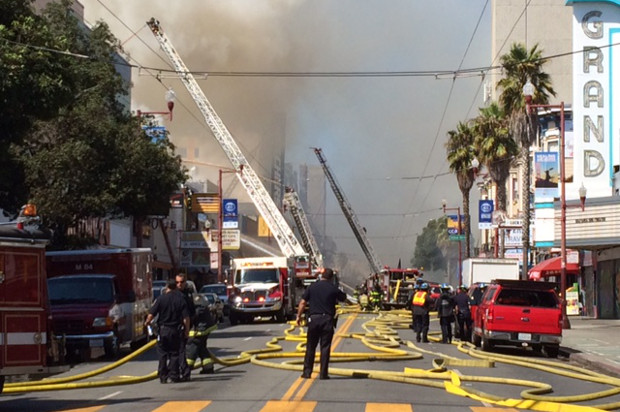 A retail store in San Francisco’s Mission District that was destroyed in a five-alarm fire Thursday afternoon had previously been given a correction notice by the fire department for overcrowding of merchandise, a fire spokeswoman said today.

The owner of Big House Inc., a wholesale store selling merchandise such as backpacks, luggage, toys and clothing located at 2632 Mission St., received a notice of correction in 2009 after fire inspectors deemed a walkway too narrow to serve as a safe exit and found that merchandise was overcrowding the building, San Francisco fire spokeswoman Mindy Talmadge said.

A complaint against the business was also reported to the fire department in 2013, but inspectors didn’t discover any hazards when they visited the store.

The cause of the blaze, which started shortly after 1 p.m.

Fire officials said the blaze quickly grew to five alarms by 2:15 p.m. and that the three-story building had a large amount of inventory inside from its floor to its ceiling.

As a result of a large amount of burning merchandise, the air in the Mission District smelled of burning plastic throughout the day and large plumes of smoke were seen overhead.

Talmadge said the blaze caused the roof of the building to collapse and that the structure is too unsafe to allow fire inspectors to enter the building.

She said four people, including two firefighters, were hospitalized with smoke inhalation as a result of the blaze. Talmadge said none of their injuries were deemed life-threatening.

Additional people were evaluated and treated at the scene, she said, including a firefighter who suffered minor injuries, according to Talmadge.

Talmadge said that while the fire was contained to a single building, several surrounding buildings sustained smoke and water damage.

Mission Street between 22nd and 23rd streets remains blocked this morning as fire officials remain at the scene and a large amount of debris remains on the sidewalk and in the roadway, Talmadge said.

The owner of New Mission City at 2626 Mission St., the business next door to where the fire was initially reported, was outside his store on Thursday afternoon when the fire was burning. He said he was worried that his whole store and all of its merchandise would also be destroyed in the fire.

Officials from the Department of Building Inspection are expected to evaluate the safety of the destroyed building and of surrounding buildings today, Talmadge said.

She also said it is the responsibility of the building owner to organize the removal of debris.