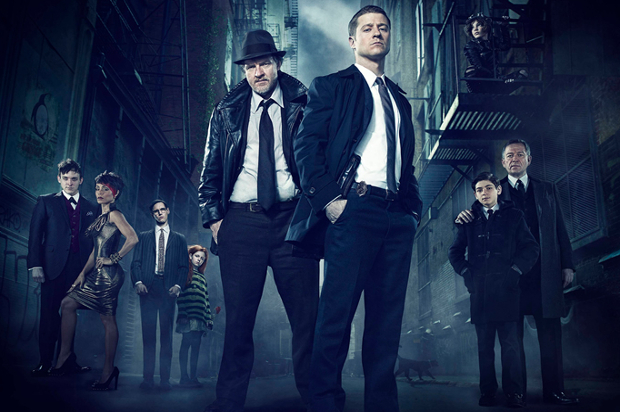 With the sheer amount of new television premiering this week, today we’re going to focus on series premieres, and stuff I liked (or at least found noteworthy) that’s coming back. No time for finales this week!

Monday, September 22
Gotham (8pm, FOX, series premiere)
In this Batman-before-Batman prequel, we have Ben McKenzie as then-Detective James Gordon and his cynical partner Harvey Bullock portrayed by Donal Logue, both wading waist-deep in the criminal element of Gotham City in the wake of the murders of Thomas and Martha Wayne. Maybe if I close my eyes, I can pretend Gotham is an alternate universe prequel to Terriers? While being voted as most promising show, that is kind of like being voted most likely to succeed. It does have potential and promise (There has been lots of early praise for Jada Pinkett Smith as mob boss [and future Penguin boss] Fish Mooney.), and may find a way to transcend a forty-five minute show of nothing but wink-wink-nudge-nudge DC Universe cameos. Worst case, I just hold my breath until the television gods properly adapt the seminal comic series Gotham Central.

Welcome to the GC, bitch.

Scorpion (9pm, CBS, series premiere)
People seem to like the Big Bang Theory (I am writing the guide on how to cope with loved-ones who say their favorite show is the Big Bang Theory). So, what if the Big Bang Theory was a light-hearted procedural (dare I say, a FUN-cederal)? Based on the life of genius computer hacker Walter O’Brien and his computer security outfit Scorpion Computer Services, Walter’s other nerds in other disciplines (Math! Psychology! Engineering!) all strive to help save the day, in what is perhaps a more nerdy NCIS.

Robert Patrick shows up in the pilot, because I think legend goes if you find Robert Patrick on the street and ask him to be in your pilot he has to say yes.

Sleepy Hollow (9pm, FOX, season premiere)
Sleepy Hollow ended up becoming one of my favorite freshman shows of last year (and one of the most diverse shows on television) with its expertly calibrated madness. (the show went from Headless Horseman with an assault rifle in the pilot to a season finale featuring Zombie George Washington) And while we are blessed with another season, I can’t help but be slightly afraid that the crazy simulator starts breaking down. I have high hopes though, trust.

Tuesday, September 23
Marvel’s Agents of SHIELD (9pm, ABC, season premiere)
Agents of SHIELD came in with a rolling head of steam and proceeded to take a hot steaming dump all over the faces of fans of Marvel and good television for most of its first season.

Then there was a late season rally, thanks to the Captain America Winter Solider reveal, which made the show pretty decent. It makes me wonder if they were sitting on the reveal all along, and had to stall for time. The first season finale left it in a good spot for a second season. And while the show probably won’t be my own dream of a (season one) Homeland taking place in the Marvel Cinematic Universe, maybe season two can finally start cashing in on the promise of a weekly show taking place in the MCU.

NCIS: New Orleans (9pm, CBS, series premiere)
Apparently there is enough Naval and Marine Corps related crime to necessitate a second spin-off of CBS’s NCIS (remember when it was called Navy NCIS in season one? It’s like people who call them ATM Machines). Scott Bakula stars along with The Shield’s/Sons of Anarchy’s C.C.H. Pounder, solving Naval and Marine Corps related crime in the Big Easy. This is probably as close as we get to The Simpsons Chief Wiggum New Orleans spin-off Look Big Daddy, it’s Regular Daddy!.

Wednesday, September 24
Black-ish (9:30pm, ABC, series premiere)
Anthony Anderson and Laurence Fishburne star in this sitcom about an upper middle class black family trying to grapple with a sense of culture and identity while living in the suburbs.

Thursday, September 25
How To Get Away With Murder (10pm, ABC, series premiere)
While Executive Produced by Shonda Rhimes (y’all TV nerds need to be giving Rhimes her shine, she is one helluva force), How To Get Away With Murder was created by Peter Nowalk, who’s written for Grey’s Anatomy and Scandal. He spreads his wings and anchors the Shonda Rhimes Night (done right) with Viola Davis as a tough law professor whose students get entangled in ShondaLand-esqe shenanigans (including but not limited to: Murder! Sex!)

Friday, September 26
Transparent (Amazon, series premiere)
Starring Jeffrey Tambor, Transparent is one of the shows that comes out of Amazon’s own pilot program that made it to series. In this comedy drama, Tambor plays a person coming out as transgender to a family that harbors its own set of secrets.

The Amazing Race (8pm, CBS, season premiere)
Leaving The Amazing Race in the Friday Night death slot is probably saying something about how the CBS’s Sunday nights are gonna be defined with Madam Secretary and The Good Wife.

Sunday, September 28
Once Upon A Time (8pm, ABC, season premiere)
Once Upon A Time bringing in the Frozen characters into Storybrook is a somewhat terrifying proposition to be honest (and reeks of uh, cross-platform integrated synergy or something).

Brooklyn Nine-Nine (8:30pm, FOX, season premiere)
That’s Golden Globe winner, Brooklyn Nine-Nine to you. Having the ensemble police sitcom slum it with The Simpsons and Family on Sunday nights is a somewhat baffling choice, in order to make room for FOX’s Utopia (currently stinking up the joint on Tuesday nights before New Girl/Mindy Project). This also forces the re-branding of the Sunday night Animation Domination block into Sunday Funday which is half as effective. Or evocative for that matter.

Resurrection (9pm, ABC, season premiere)
Let me just take this moment to just say you’d be better off watching season one of The Returned, or to just watch for the American remake on A&E helmed by Bates Motel/The Strain showrunner Carlton Cuse.