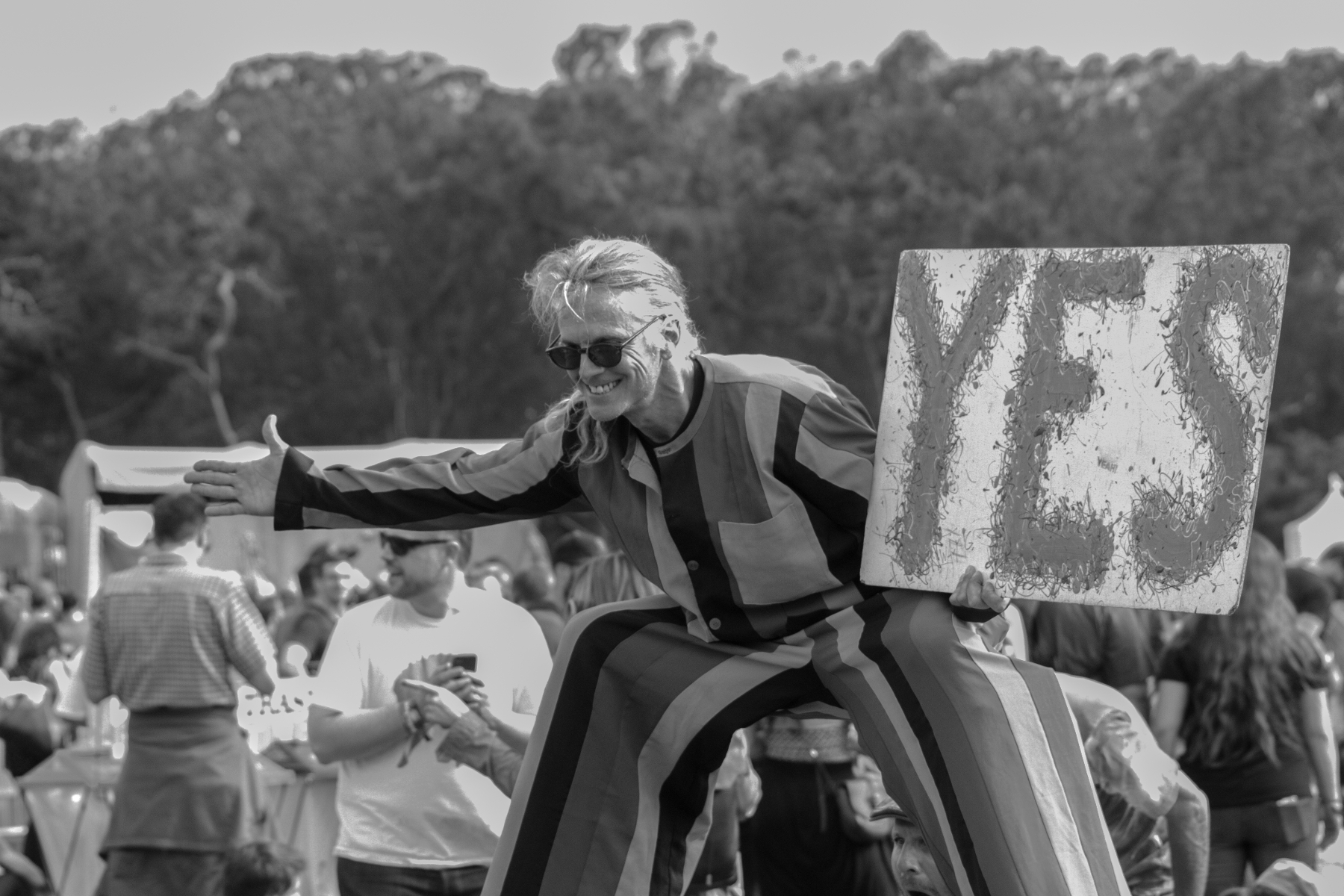 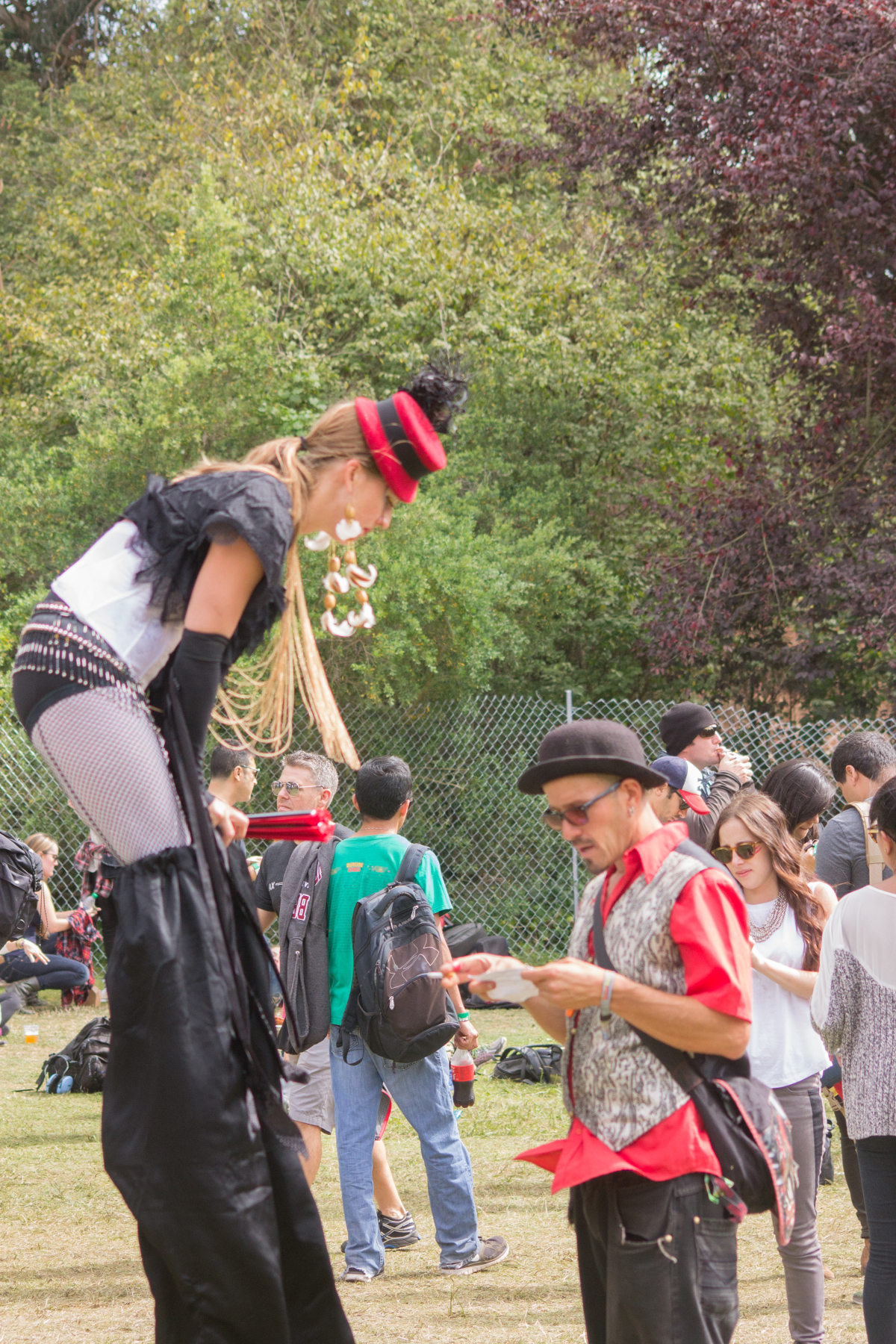 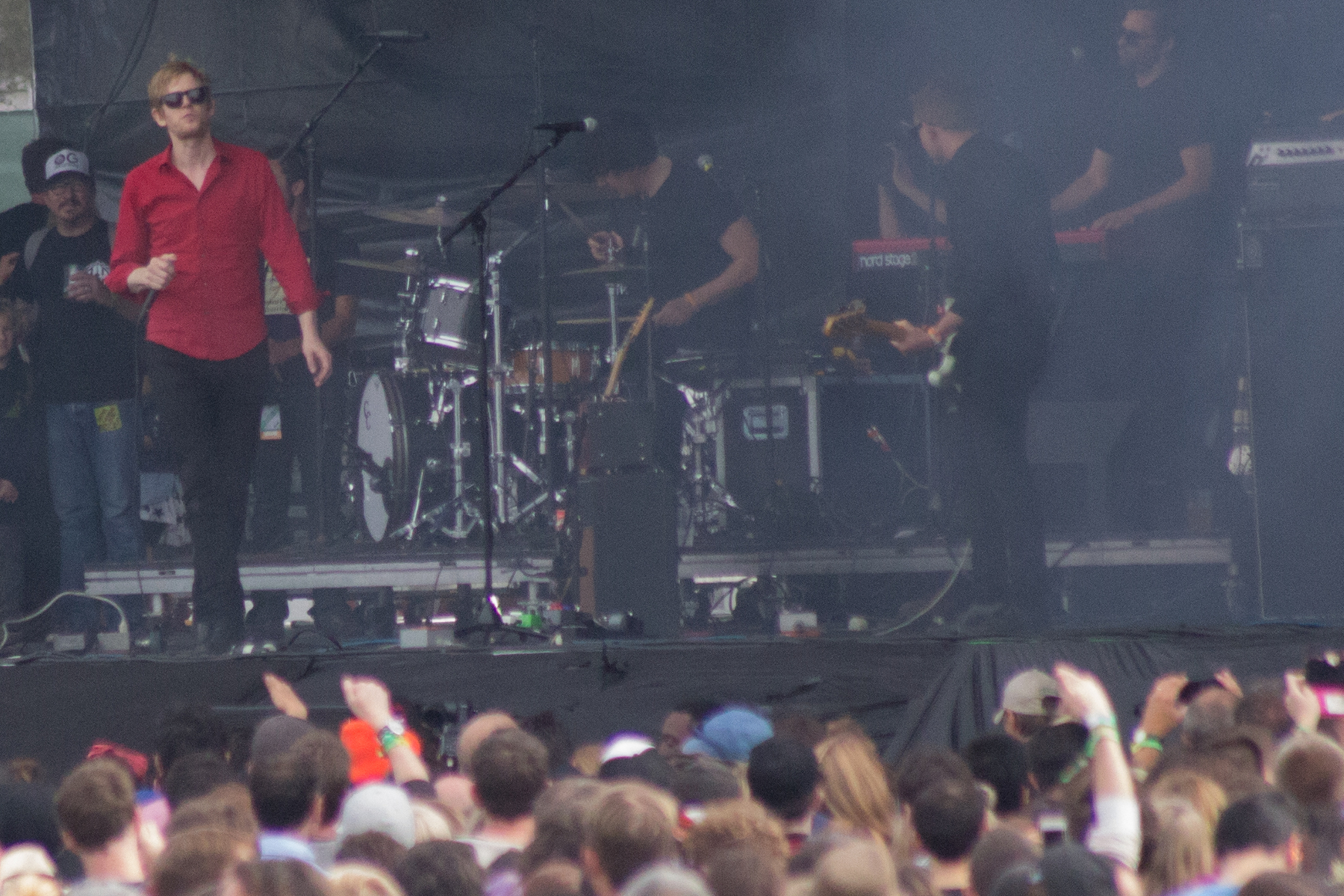 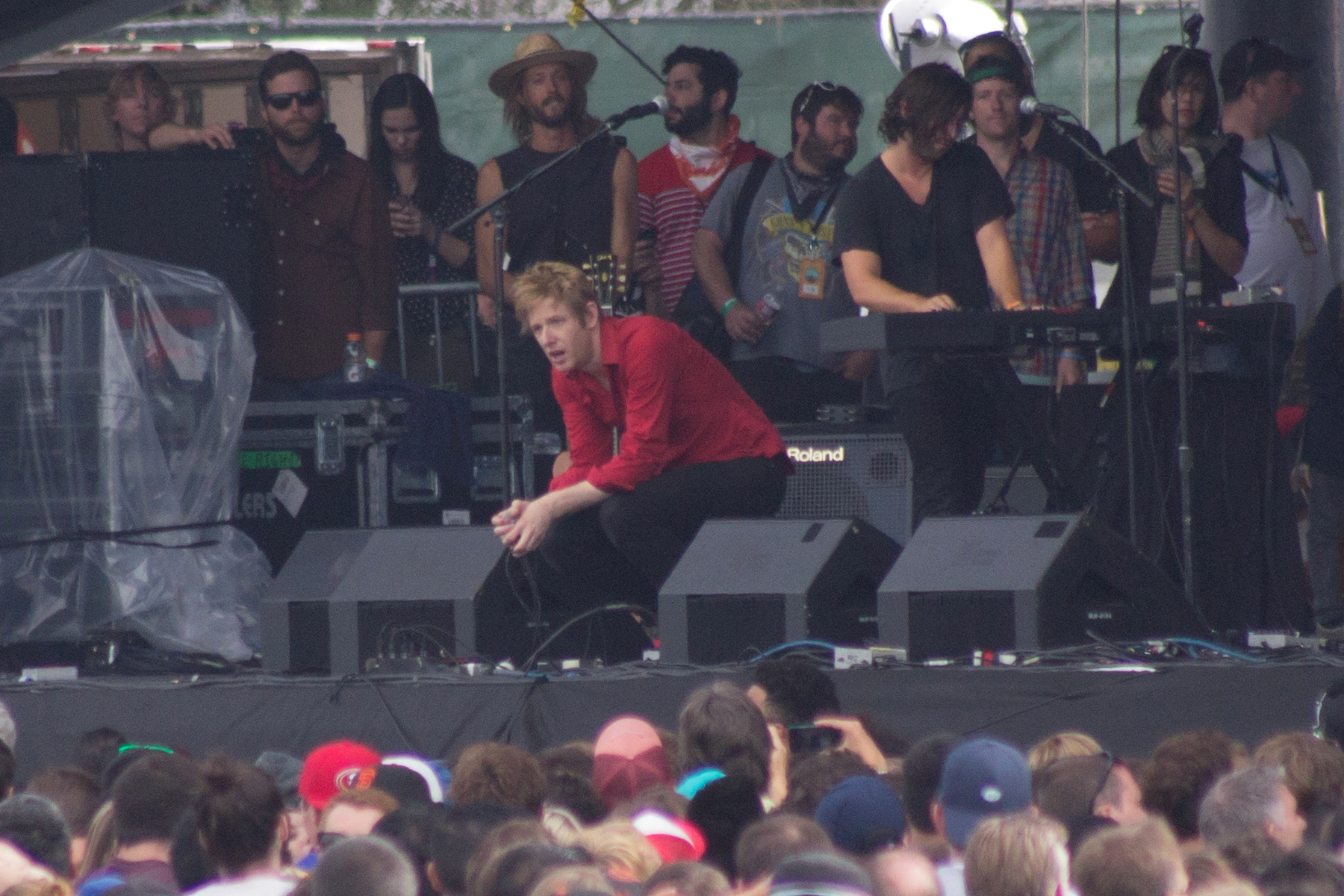 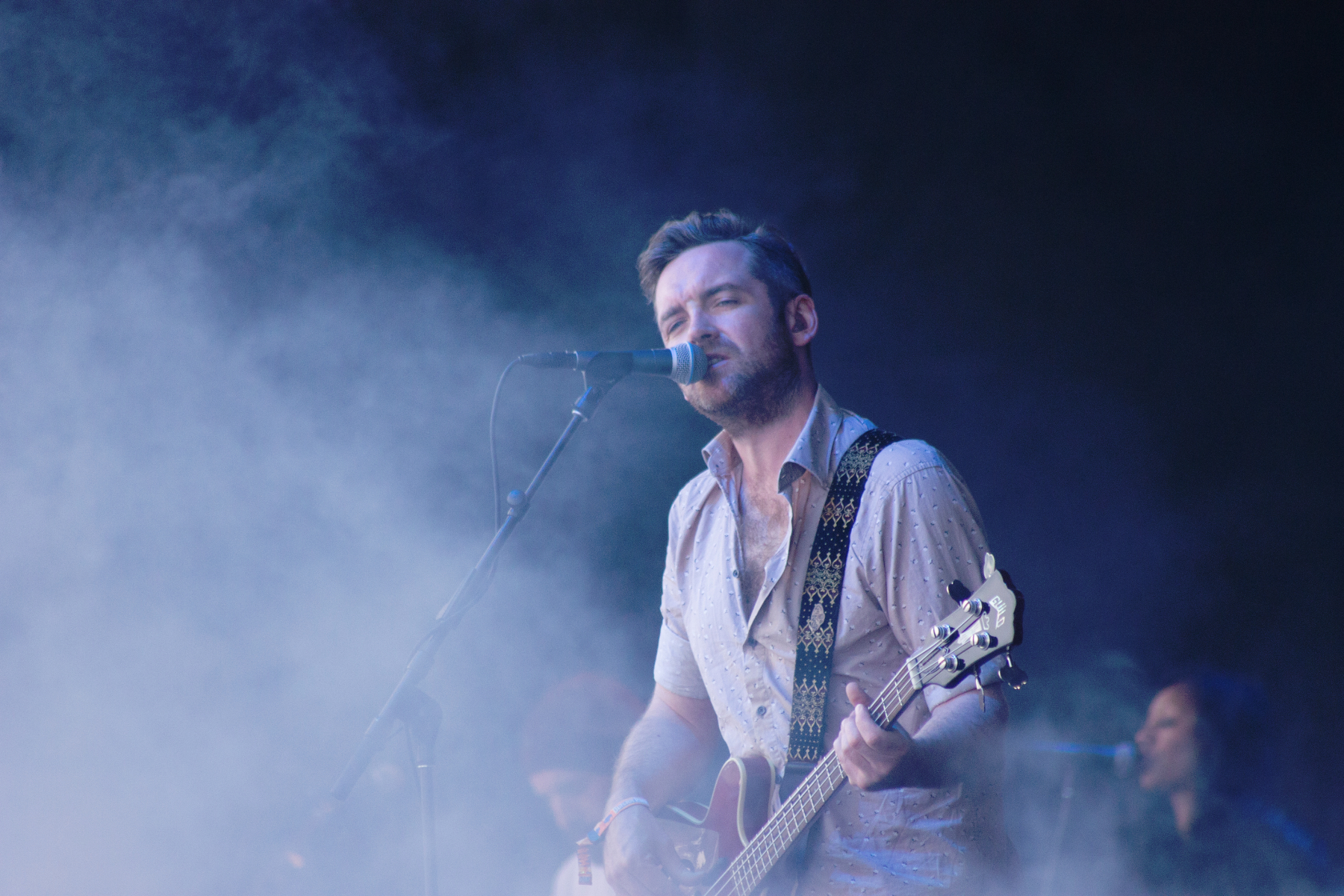 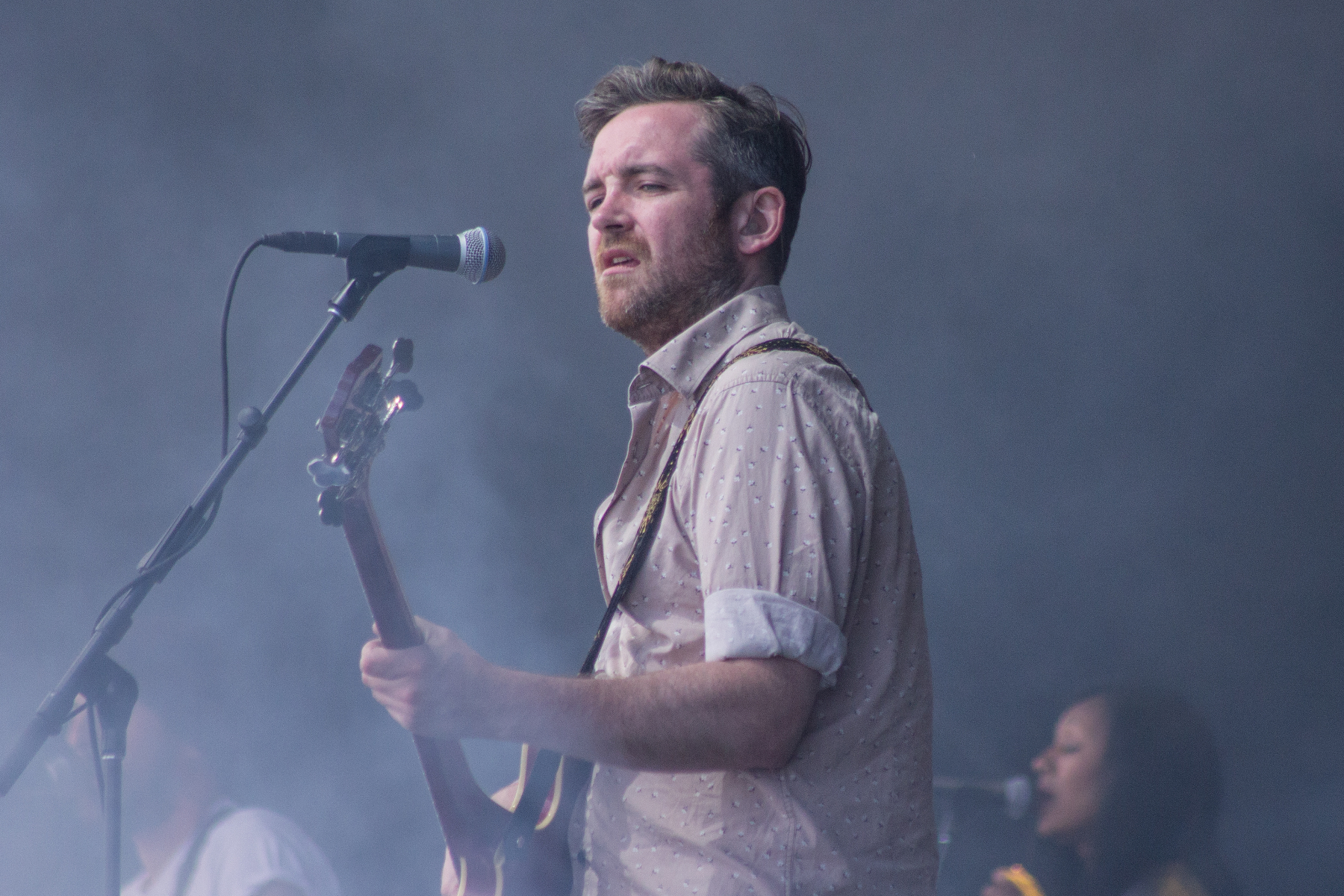 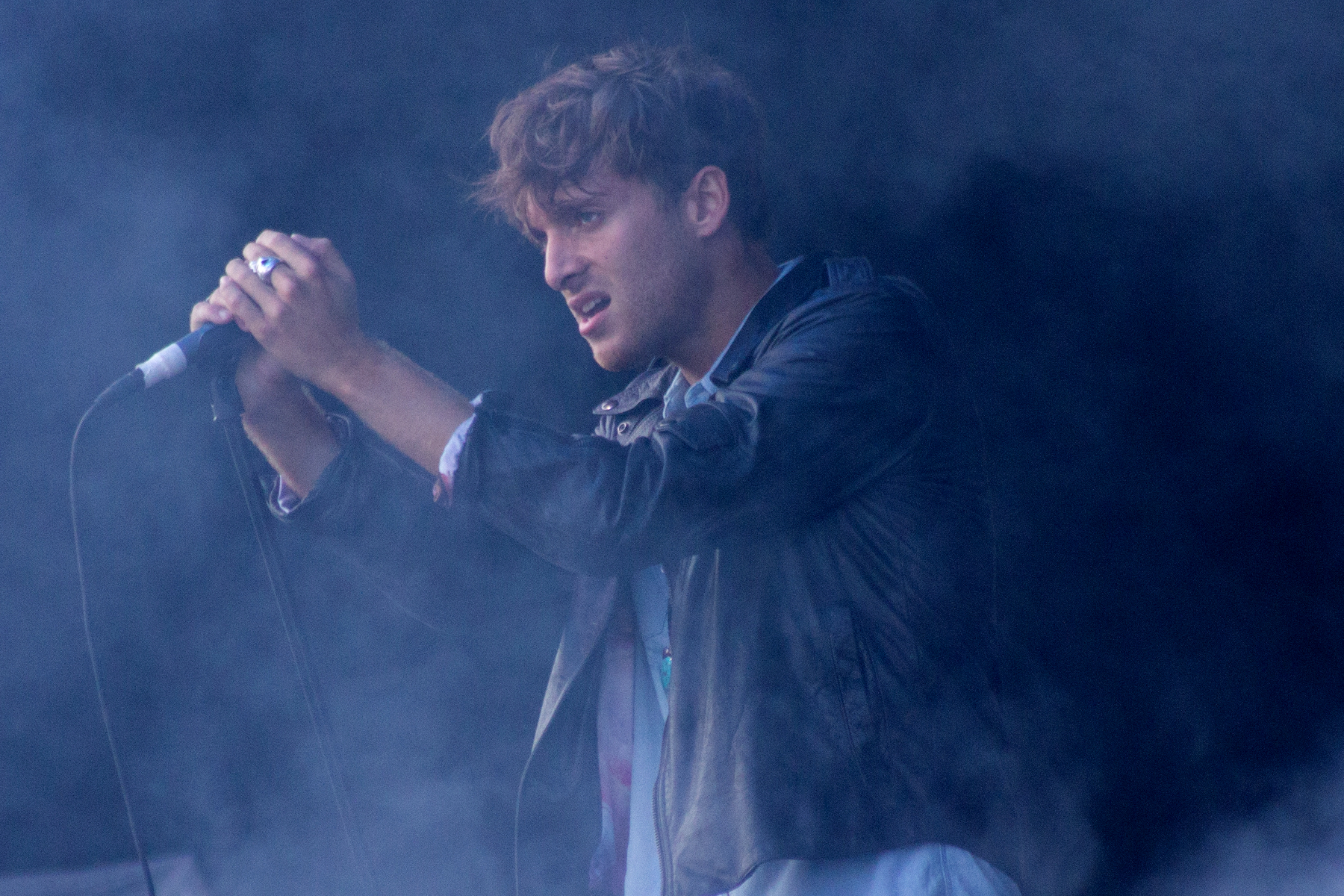 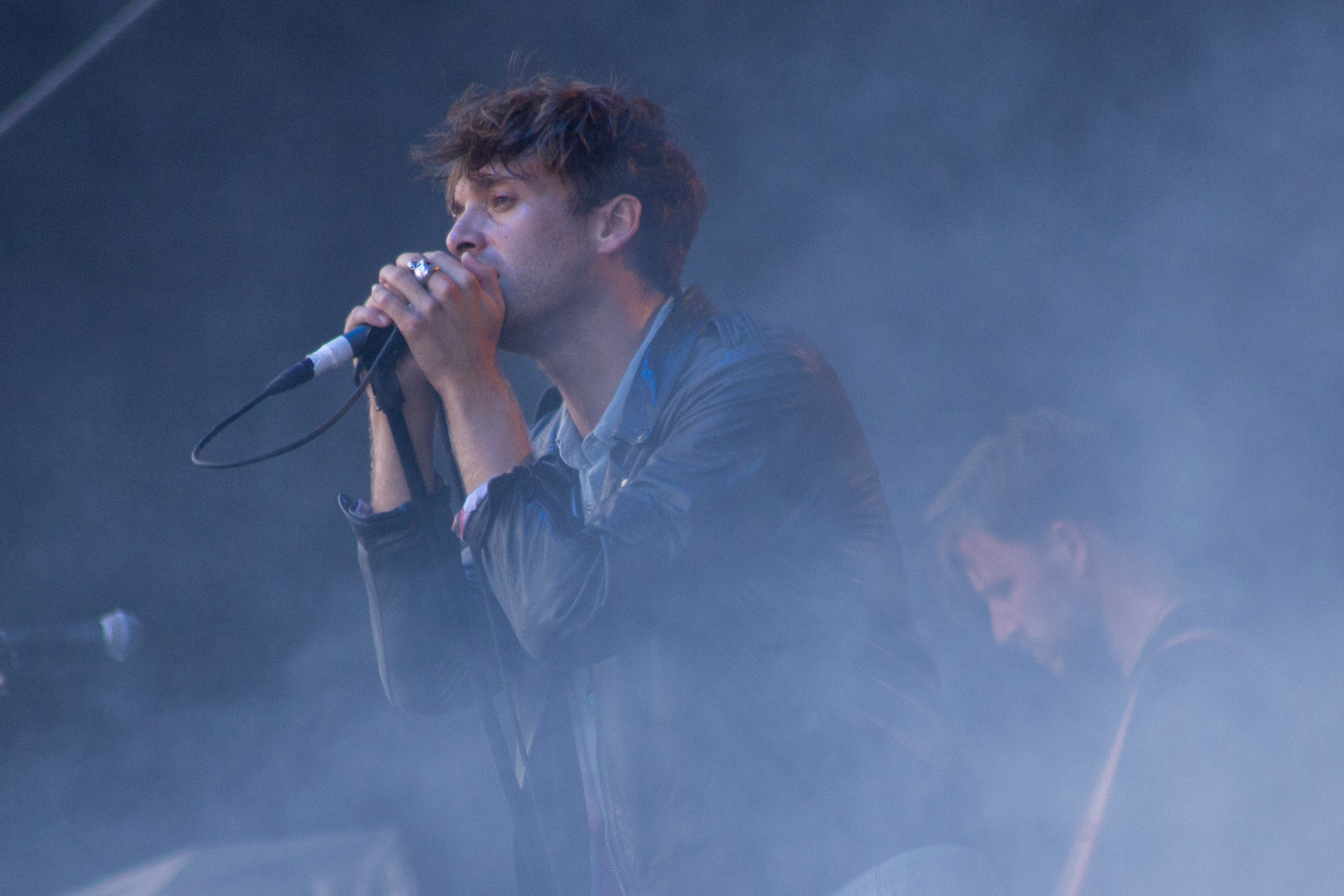 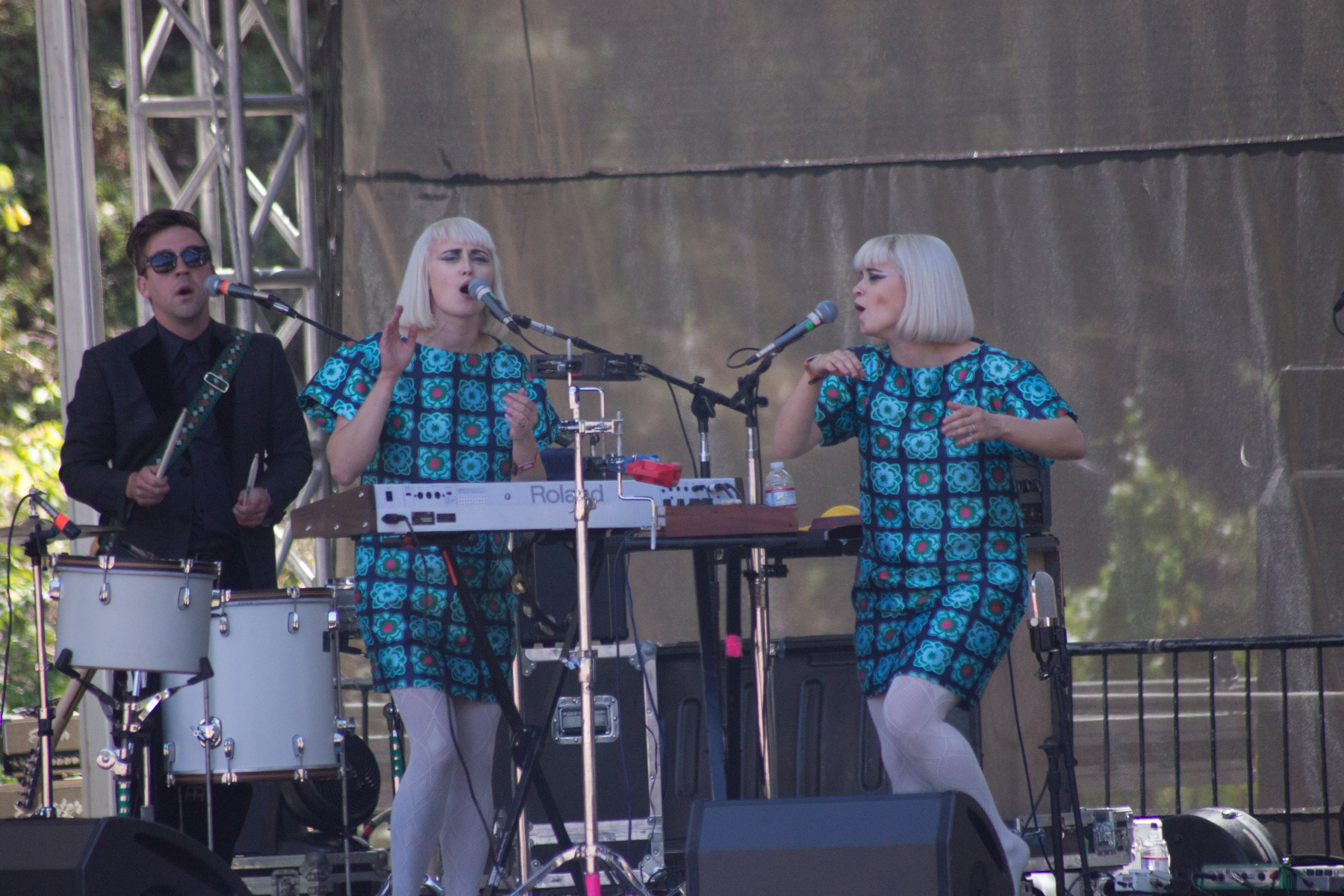 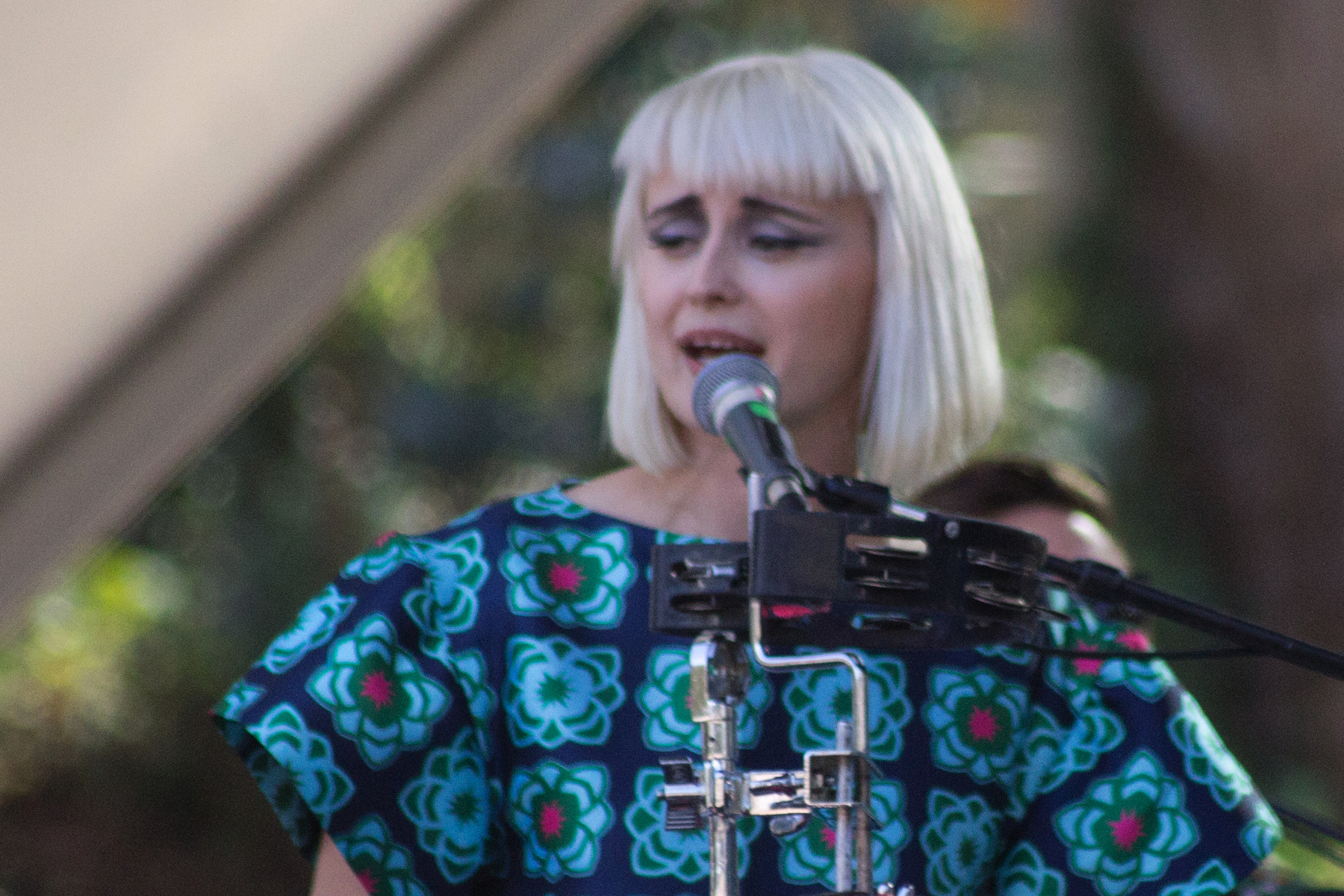 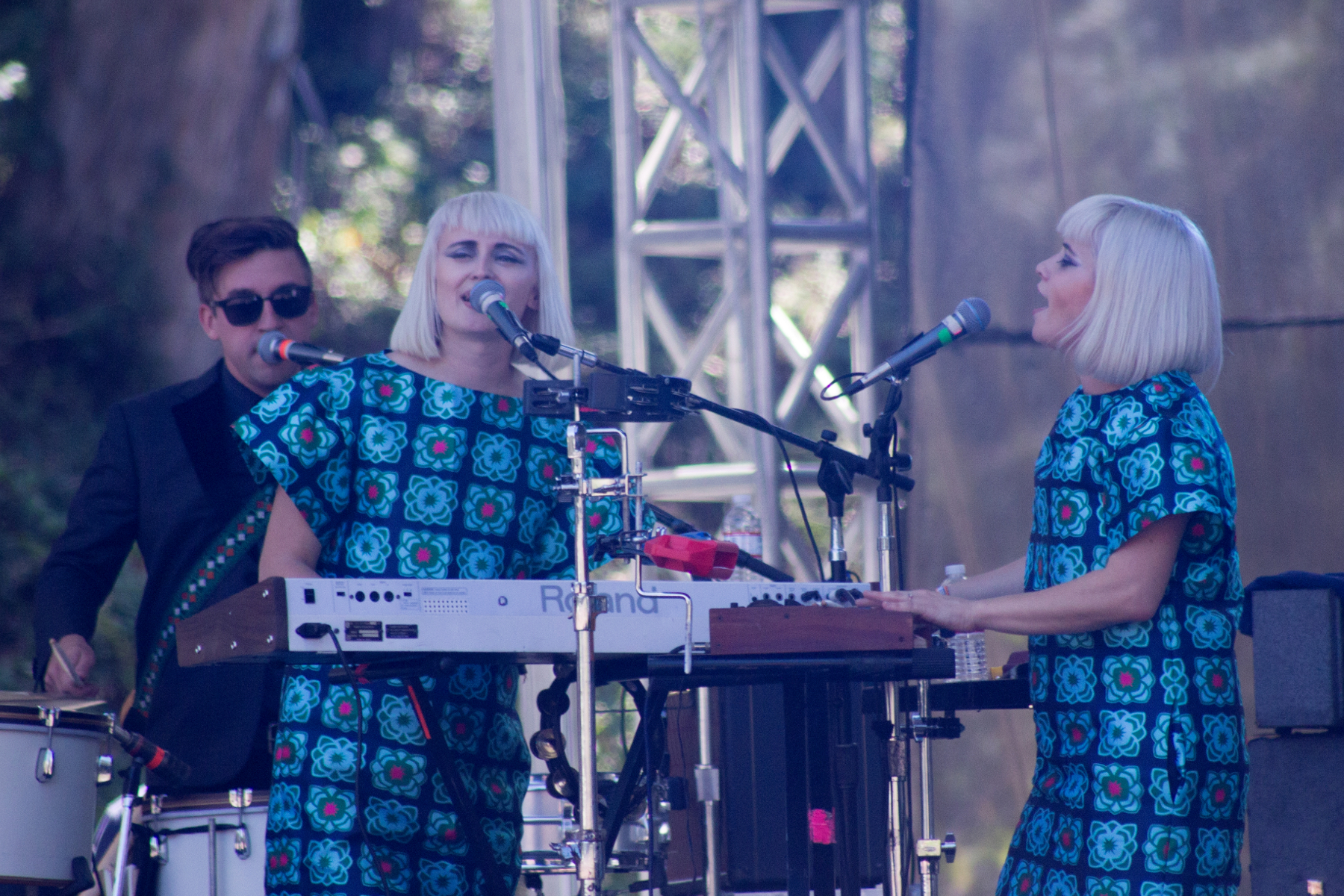 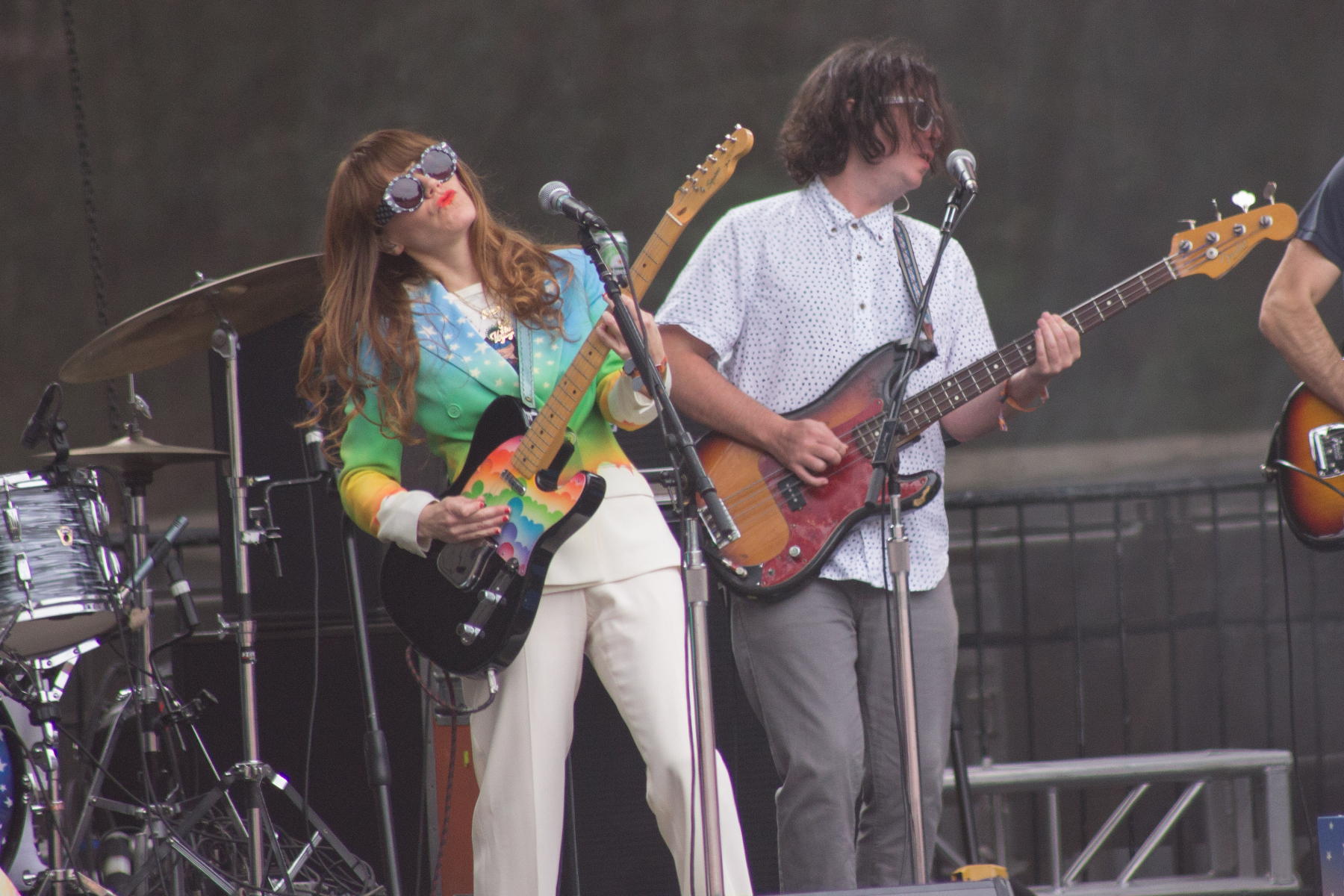 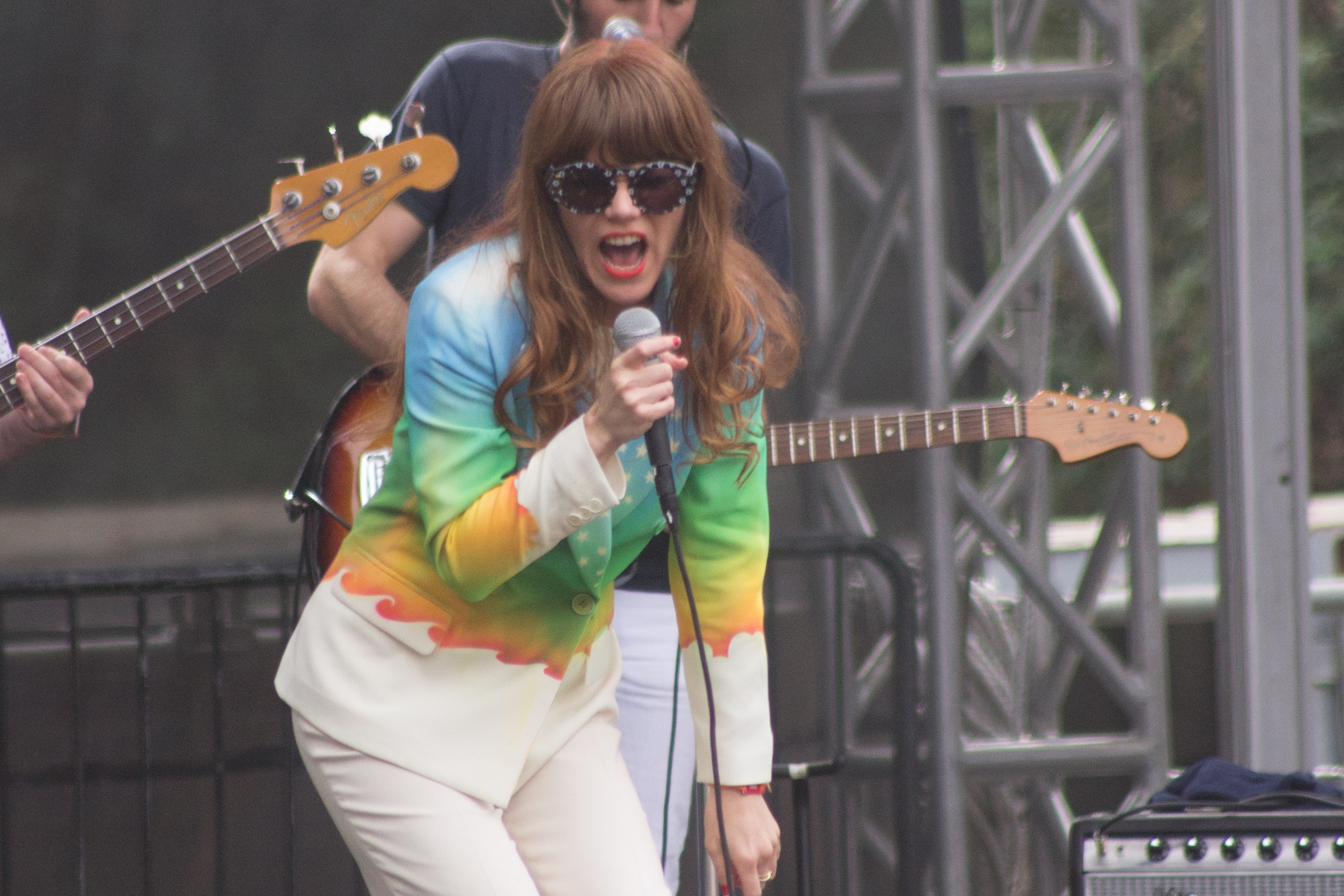 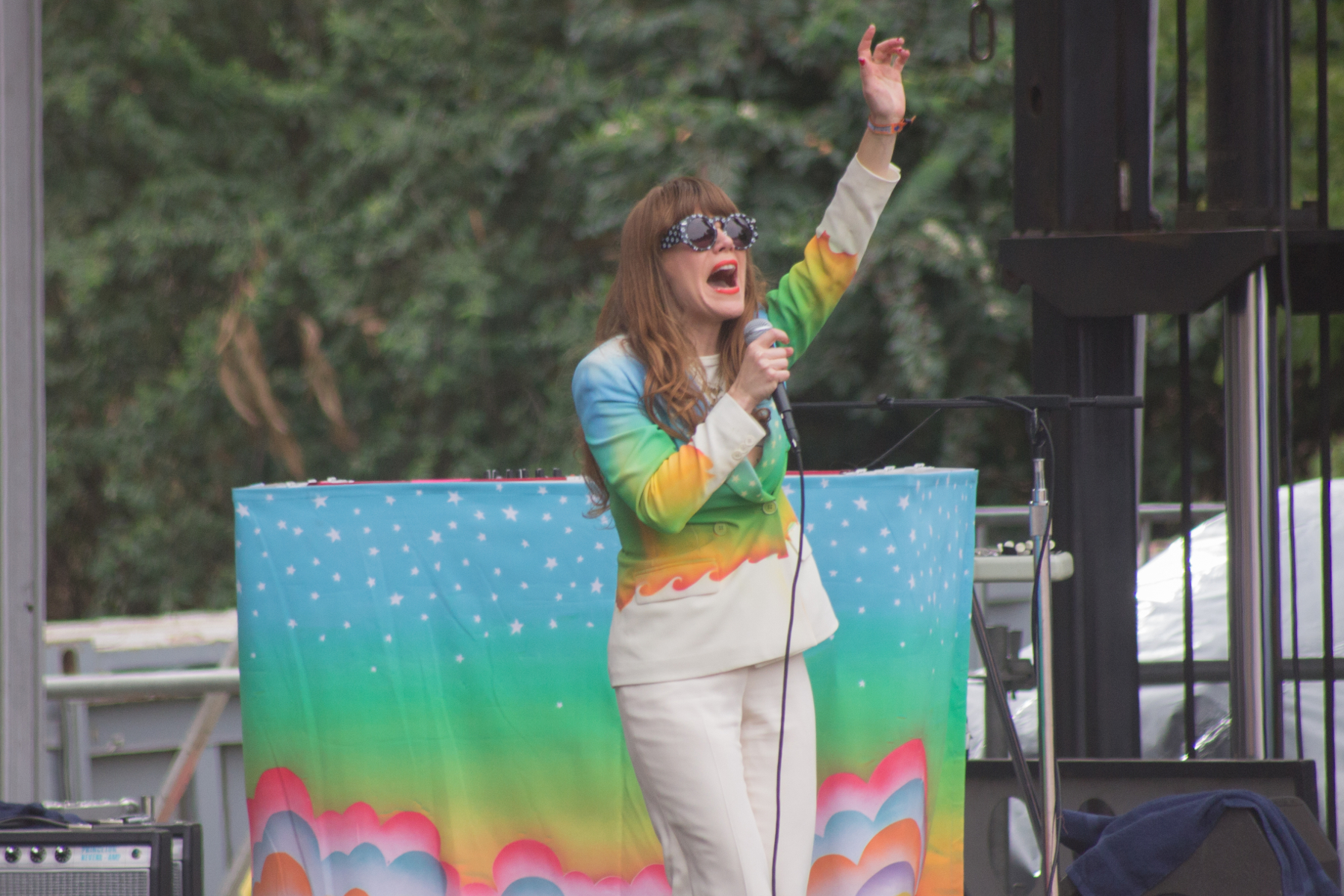 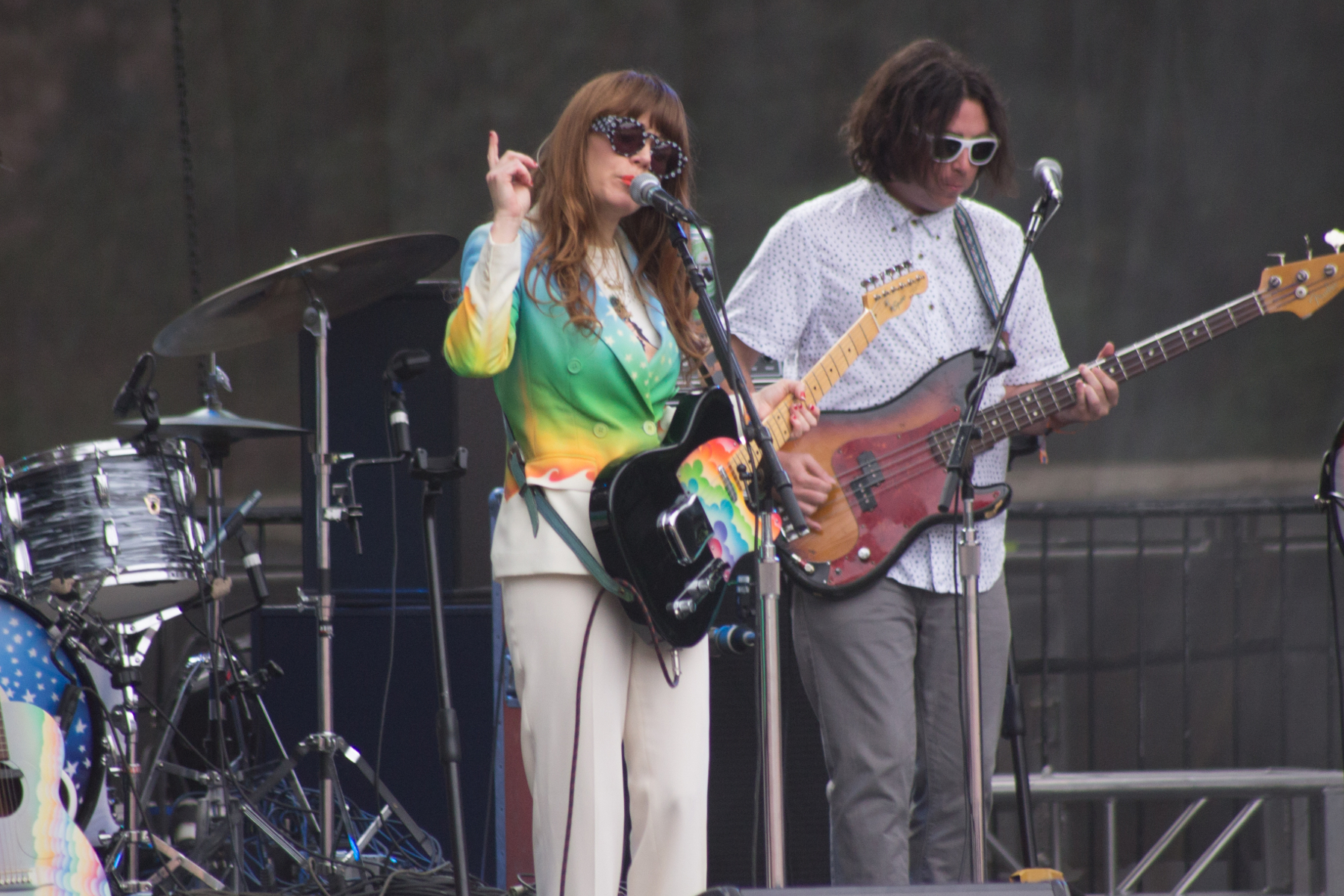 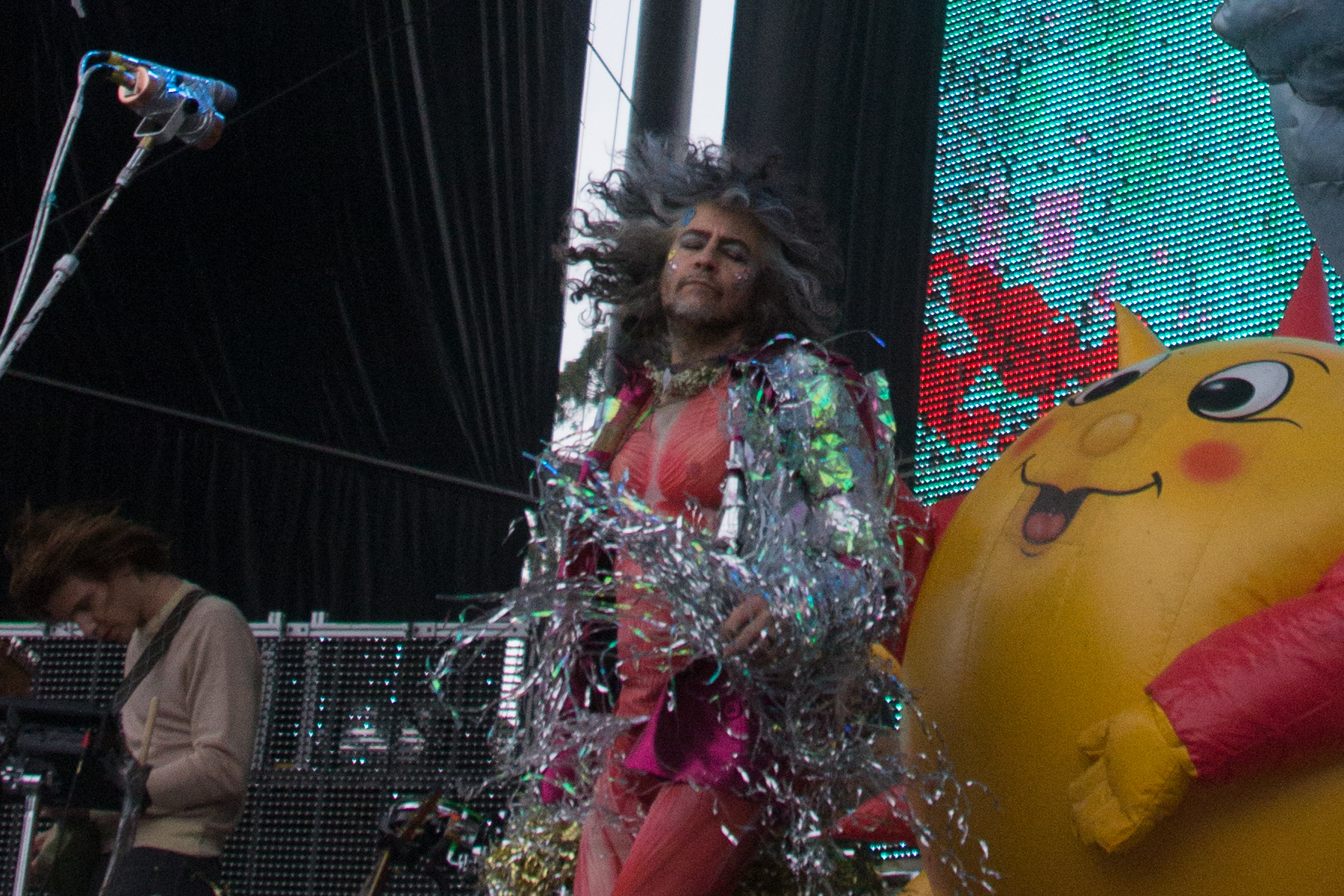 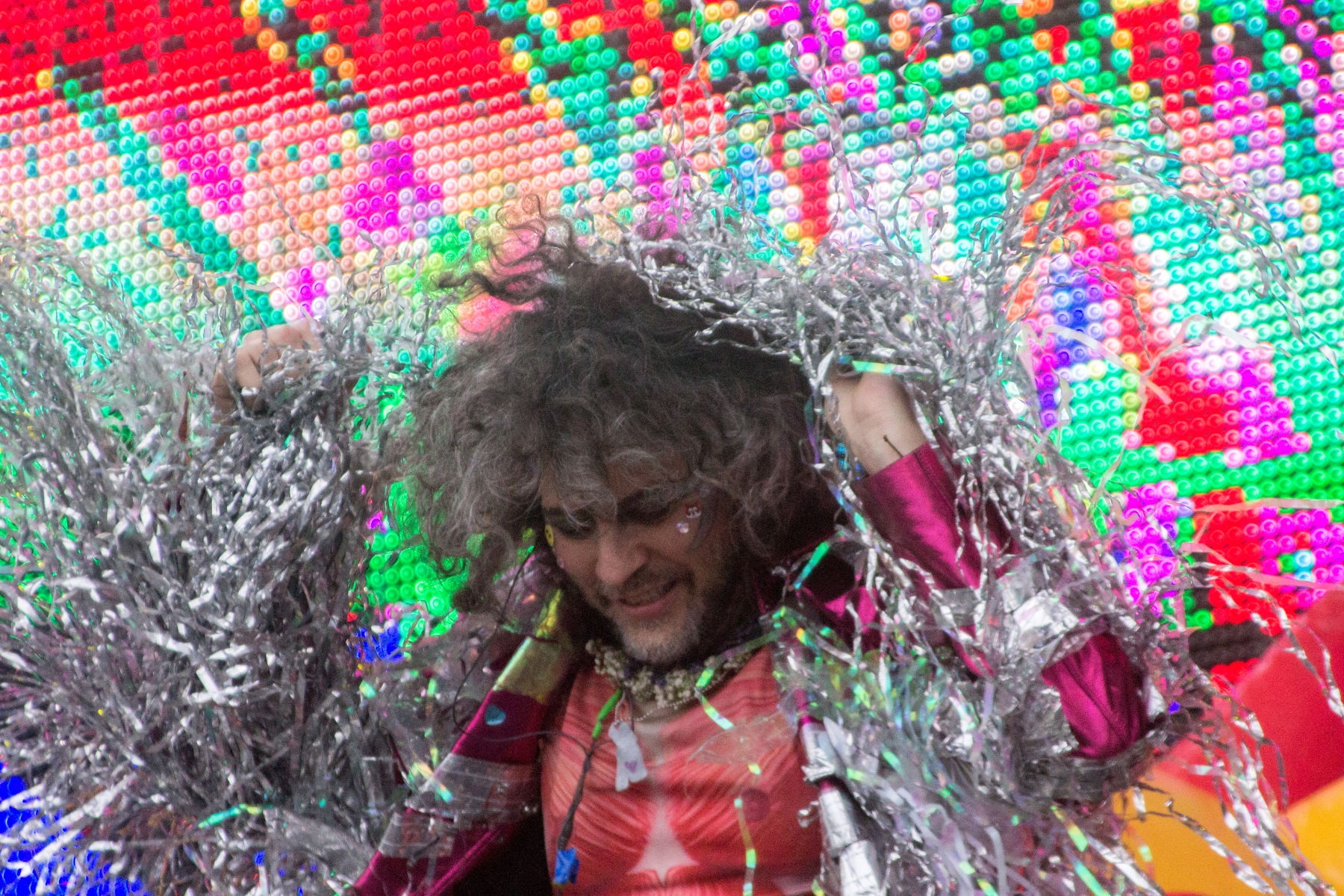 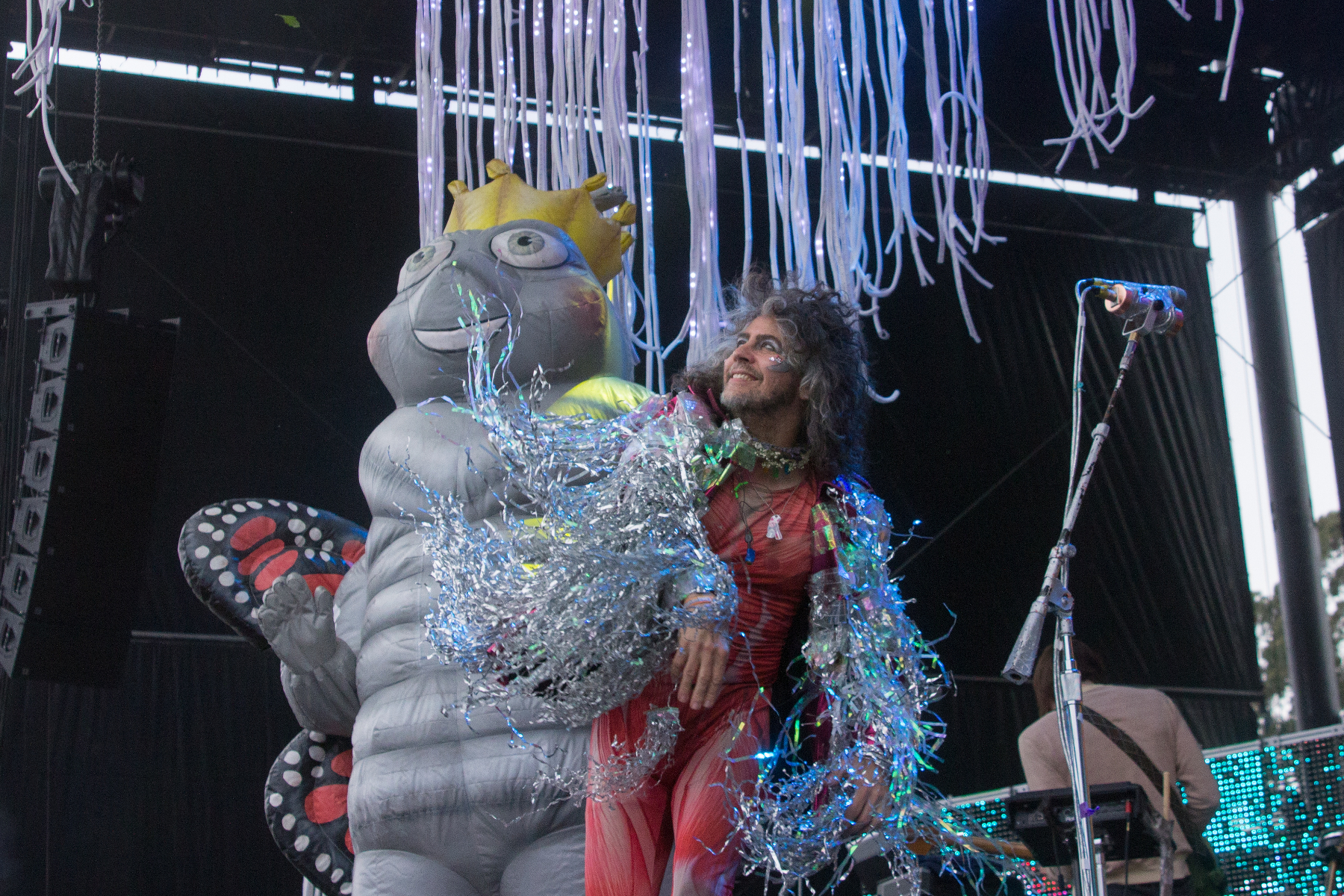 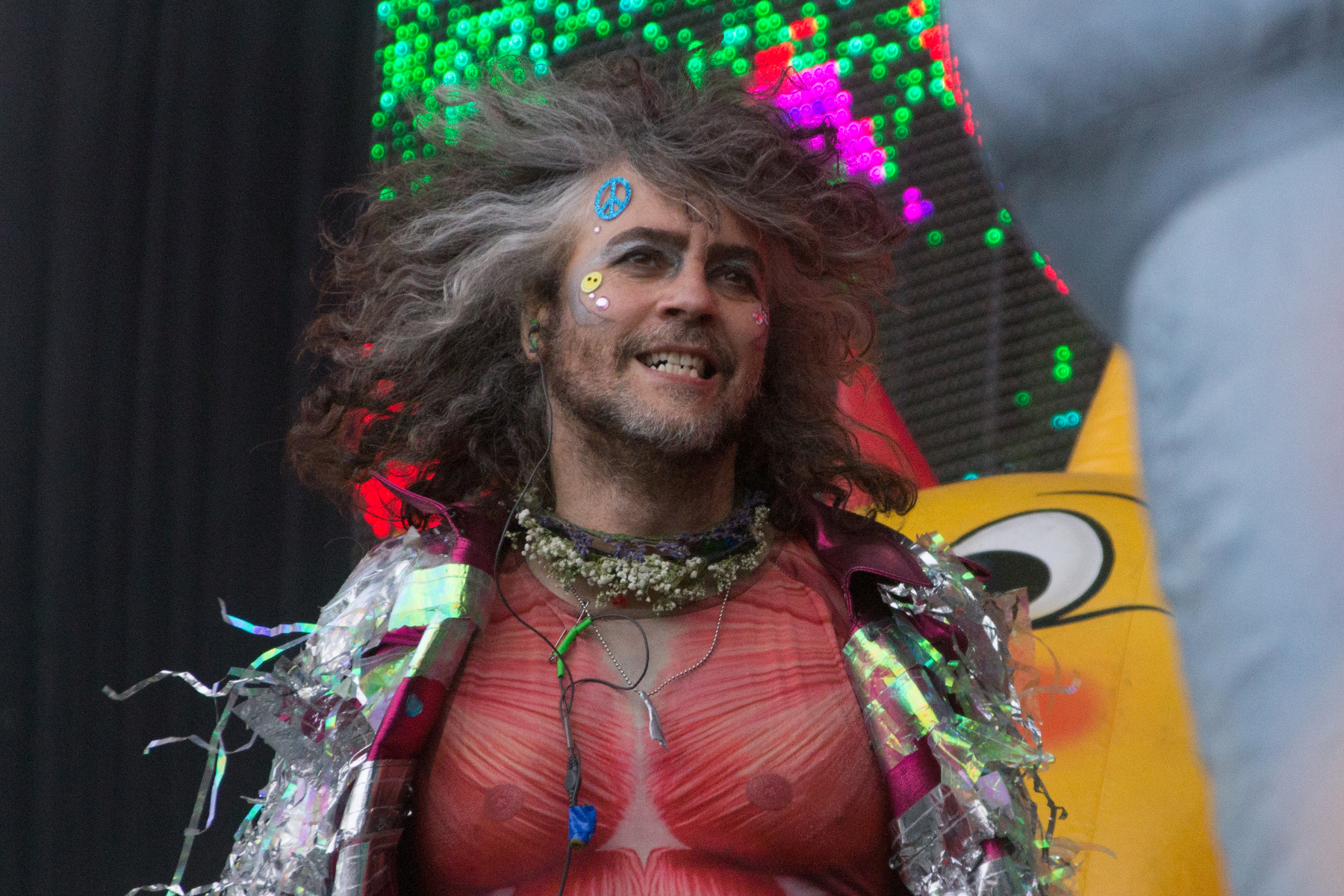 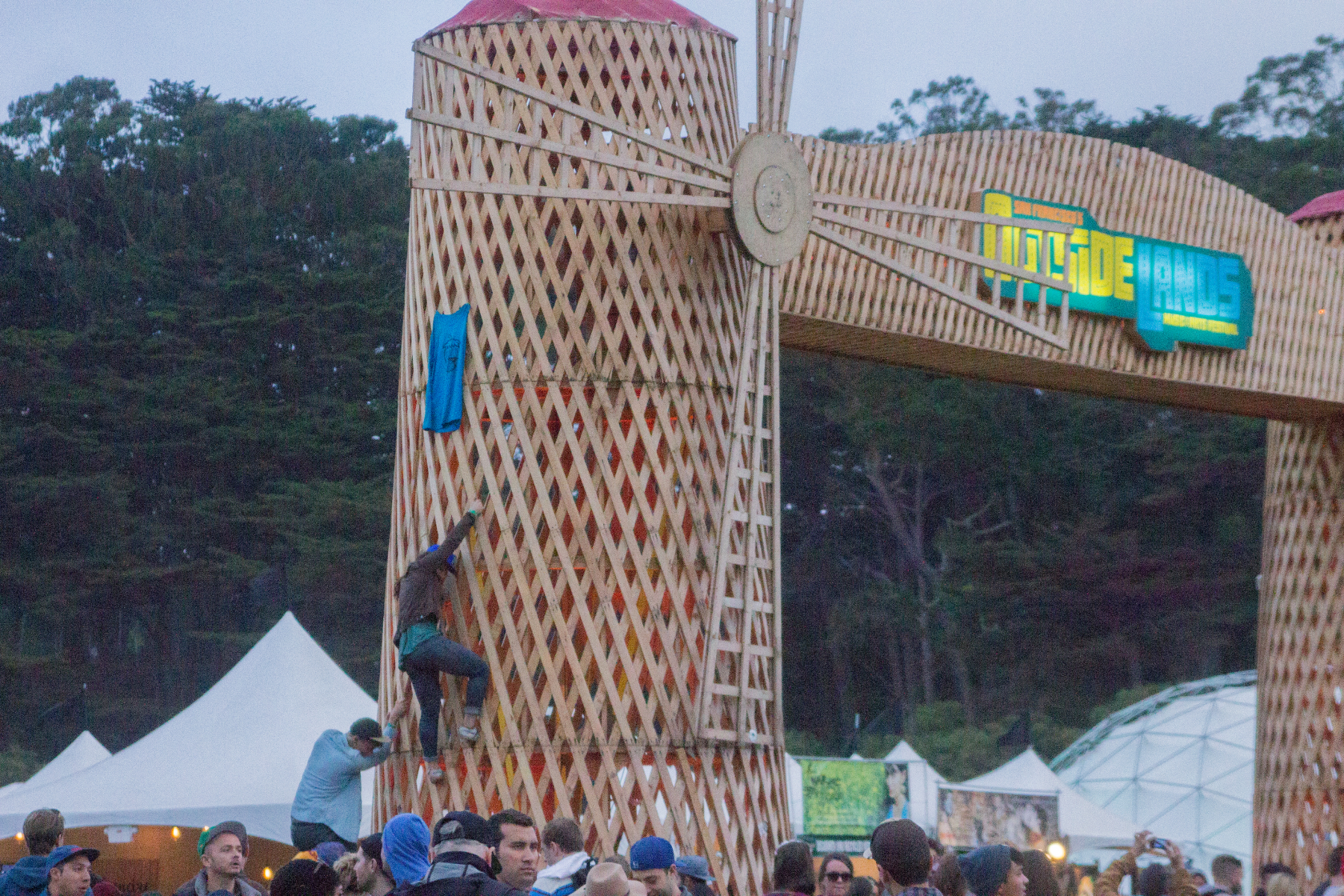 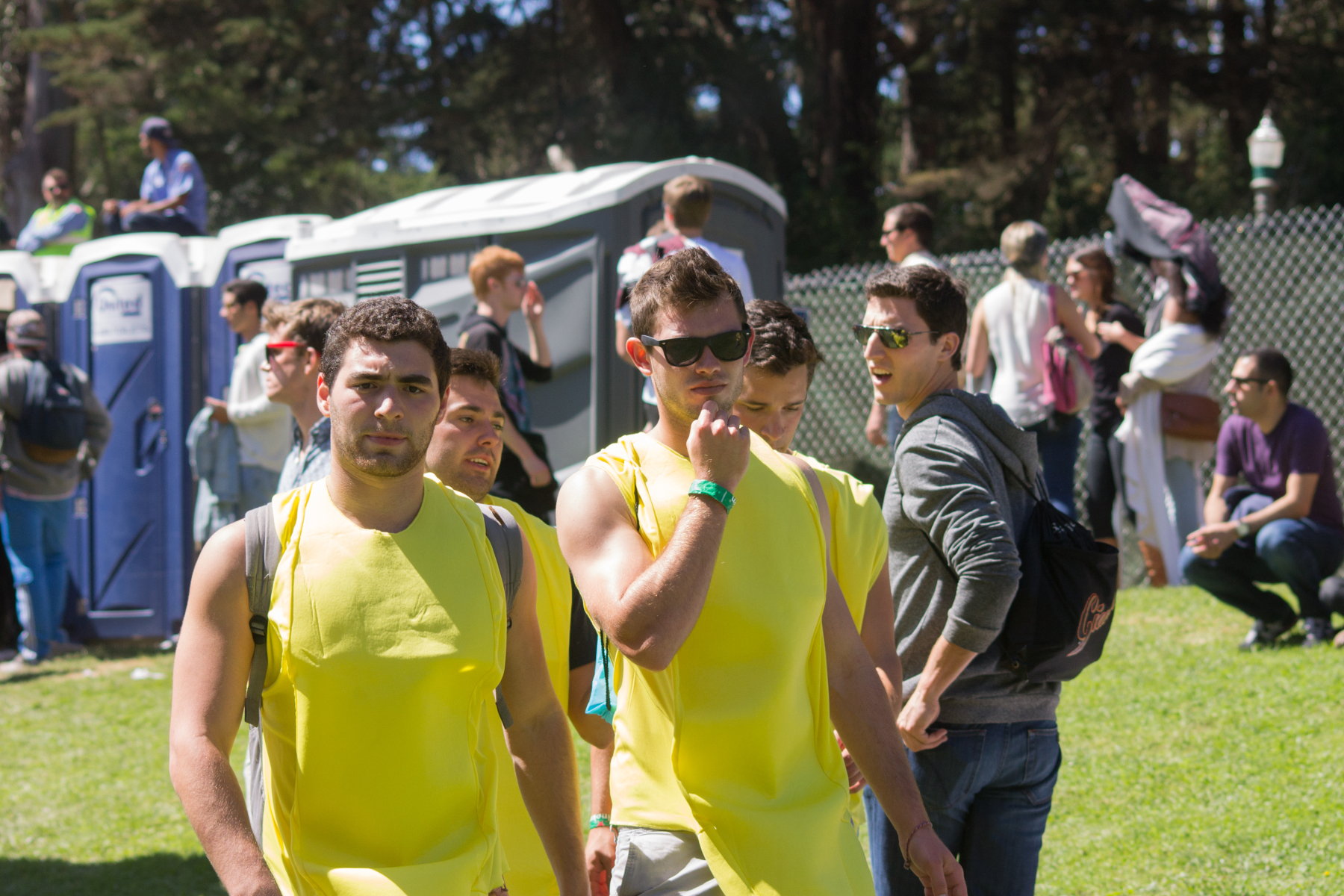 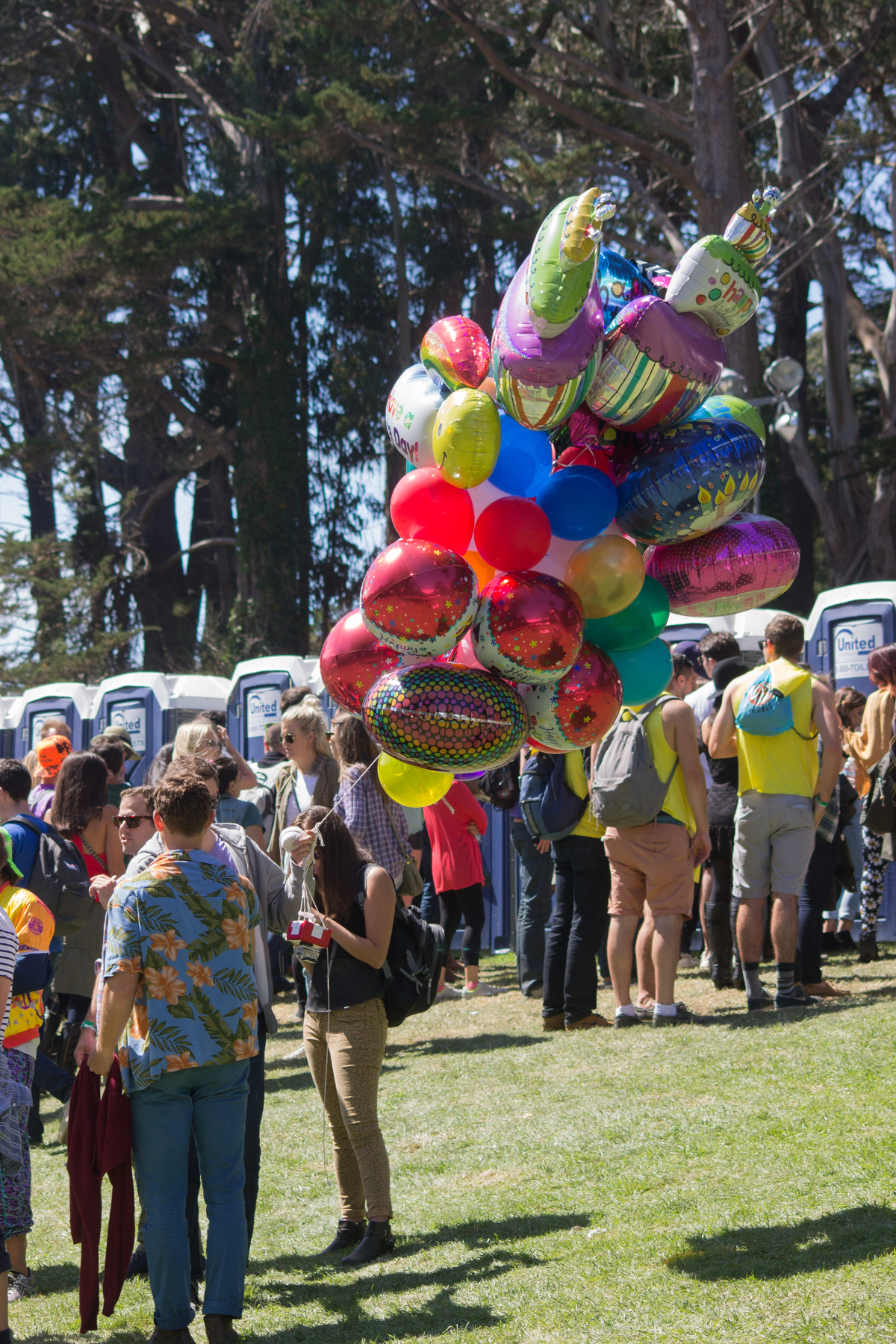 All photos by April Siese

The sun making a guest cameo appearance on Sunday after its no show on Saturday made Sunday morning feel like the mirror universe side of Friday. Getting to explore the other parts of the festival I avoided all weekend on Sunday morning before the rush came back was a lot like being the first person to poke their head out from the fallout shelter after the bombs drop in order to explore their new reality. Maybe a reality like waiting twenty minutes to be the first in line to procure a ramen burger, only to walk across the field to find a doughnut burger to stick it in to.

Sup dawg I heard you thought god was dead so here is a ramen burger inside of a doughnut burger #outsidelands pic.twitter.com/j7531uMcfa

Or checking out two-man brother rock outfit The Bots from LA at the Pandhandle stage.

The story of the day was that synth-pop darlings CHRVCHES had to cancel at the last minute as half the band and their gear made it to San Francisco but the other half was stuck in Vancouver due to, in CHRVCHES words, “mess ups by Vancouver airport and a healthy dose of bad luck.” This pushed the main stage acts back an hour to kill time, started fake rumors of a possible Postal Service announcement in the media tent, general sunning and raiding of water stores, and all y’all being saved from having to deal with CHRVCHES chicken puns.

Paolo Nutini’s fans should learn how to use Twitter, seeing that they tweet at me all the time telling me how great I was at Glastonbury, or that I sing well or whatever. I figure I should take this opportunity to maybe look into the eyes the man I’ve been inadvertently stealing internet shine (via the main stage screens). Well I did, and realized that people must really love blue eyed adult contemporary or something. Also, going to take credit for whatever praise his fans accidentally send me. Yes, I was great at Glastonbury.

While I sort of still have mixed feelings about Silicon Valley (but yeah, the season finale was great), I still adore the cast they assembled for the show, TJ Miller, Thomas Middleditch, and Kumail Nanjiani. The chemistry between the three of them is so apparent! Stand-up from Miller (bit about George Washington Carver inventing peanut butter turned into a tangent about relationships) and Nanjiani (person in front confused him for Kunal Nayyar from the Big Bang Theory incites audience wide boos and jeers). Middleditch didn’t do stand-up per se, but regaled us with a series of one man scenes and a story about puking while scuba diving. Middleditch is such a dynamic performer onstage, it’s such a shame his character on Silicon Valley is so dull. Also, Craig Robinson peeked out from backstage, taking in the show.

Lastly, please Outside Lands never stop having the comedy portion of the festival in whatever that hippie fuck tent is because holy shit every act I’ve been to just riffs the place to pieces/remarks on how cool it is.

In any other circumstance, I think I would have really enjoyed The Flaming Lips, but at this point of the day, I was too sober and too tired to enjoy any of it. I mean, I could enjoy the music just fine, but I would look up from taking notes (“guidance counselor rock”) to see people in a rainbow and mushroom get up, and I. Just. Couldn’t. Even. And it was just a matter of playing the waiting game to see Wayne Coyne in the hamster ball. If the Flaming Lips were closing out Friday, I know I would have enjoyed their psychedelic space rock, and it would have set a different tone for the rest of the weekend. But playing penultimate (there I go again) to the eventual festival closer The Killers was just a bad spot for them. And it’s not their fault! It’s totally me! Not them!

Closing out Outside Lands 2014 was The Killers and they opened with Mr. Brightside, and honestly I could have left right then and there, satisfied. I would have been happy if they had just played the entirety of Hot Fuss and four tracks from Sam’s Town. I will always remember them as the Duran Duran-esqe synth band from Las Vegas that took an awkward photo with me at the Virgin Megastore in 2004 for the release of Hot Fuss. Not so much as the arena rock band somewhat aping Springsteen, but that’s their prerogative, and that’s quite alright.

I really, really could have done without their low hanging fruit callouts of the Golden Gate Bridge, the 49ers, CCR, Uncle Jesse, Rice-A-Roni as things that San Francisco has given us, before launching into a cover of Bad Moon Rising. Brandon Flowers, dawg, Rice-A-Roni? Are you the out of touch relative that makes fun of your nephew or niece for moving to San Francisco because you were too chicken shit to leave your hometown? And I say this as someone who likes The Killers.

Why did The Killers have to cover Otis Redding’s Sitting on the Dock of the Bay as I left Outside Lands for the last time this year? Did Brandon Flowers get onto a cable car while performing it? Was this supposed to be the narrative signpost I was looking for, something about San Francisco’s own music festival? Because all I got for you is that, what if the Outside Lands’ mascot, Ranger Dave is a Titan, and it takes corporal form in Outside Lands, and we as attendants are the blood cells that circulate around the nervous system of Outside Lands, and sometimes we clot when trying to experience music.

I hope once the Killers finished their set someone got Brandon Flowers clam chowder in a bread bowl. Because that that’s another San Francisco thing that people who live in San Francisco do.

Thanks for the dust and flower crowns and fanny packs, Outside Lands!

Now it’s back to enjoy music the way it was meant to be enjoyed – listening to Bonnie Tyler on loop via a Spotify offline playlist while buying floss at a CVS.