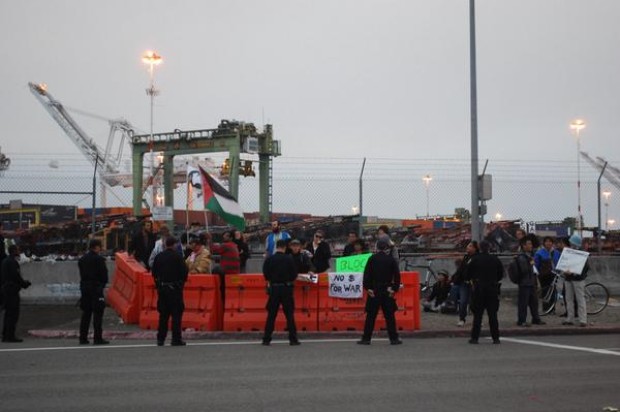 An Israeli-owned ship that was blocked by protesters for days from unloading cargo at the Port of Oakland left port this afternoon but returned hours later.

Marine tracking services showed that the Zim Piraeus departed the port shortly after 3 p.m. today, reportedly en route to Los Angeles, but the vessel instead went several miles out to sea before making a U-turn and returning to Oakland, arriving at about 6:30 p.m.

Protesters against Israeli military action in the Gaza Strip who have maintained a constant presence at the port since Saturday were sent quickly scrambling back there.

The protesters have compared the relationship between Israelis and the Palestinians living in the Gaza Strip to the apartheid regime in South Africa, drawing inspiration from a 1984 action when dockworkers refused to unload ships moored in San Francisco carrying South African cargo.

The Zim Piraeus is operated by Zim Integrated Shipping Services, which is owned by the Israeli government and bank-controlled Israel Corporation.

It was moored at Berth 58 in the Port of Oakland since this weekend, but was been unable to unload because there have not been workers available to do so, port spokesman Robert Bernardo said.

“Despite tremendous effort by our law enforcement partners… operations at the terminal were still not able to proceed last night due to insufficient labor reporting for duty,” Bernardo said today.

Workers with the International Longshore and Warehouse Union refused to unload the ship with a heavy police presence around the protesters, which they said invoked memories of a 2003 demonstration where Oakland police fired rubber bullets at demonstrators and injured several longshoremen.

“We will not work under armed police escort — not with our experience with the police in this community,” ILWU Local 10 President Melvin MacKay said in a statement.

The protests began with a large gathering on Saturday afternoon when protesters marched into the port and demonstrated for most of the evening, and smaller crowds have gathered there for each dockworkers shift since then.

Bernardo estimated that there were hundreds of protesters there on Saturday and Sunday and about 40 this morning.

According to Oakland police spokeswoman Officer Johnna Watson, there have been no arrests during the demonstrations but police issued two citations Monday morning. She did not specify what the citations were for.