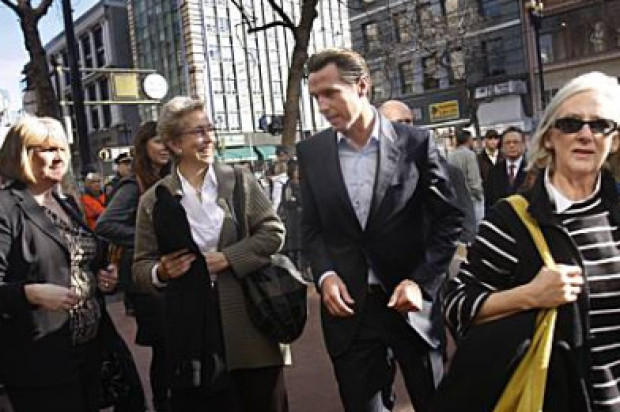 A group of residents gathered outside the San Francisco Ferry Building today to call on Lt. Gov. Gavin Newsom and other members of the State Land Commission to drop a lawsuit against the city over a measure requiring voter approval to increase height limits on proposed waterfront developments on Port of San Francisco land.

The gathering was held just before a general commission meeting, where the commission took public comments on the issue.

On June 3, Proposition B, officially called the Waterfront Height Limit Right to Vote Act, was approved by 59 percent of San Francisco voters.

The measure requires a vote before any height limit increases for development projects on Port of San Francisco property can be approved.

On July 15, State Attorney General Kamala Harris filed a lawsuit in Superior Court on behalf of the commission opposing the proposition. The lawsuit asks the court to declare the measure void and direct the city not to enforce it.

“The voters of San Francisco have spoken loud and clear,” said attorney Jon Golinger, who wants to see the lawsuit dropped.

Golinger, who is with the group No Wall on the Waterfront, said the proposition doesn’t stand in the way of progress but promotes responsible development.

“The voters do want to see progress, and that’s why Proposition B, passed by voters in every neighborhood in June, doesn’t say you can’t build on the waterfront,” he said. “It simply says you have to develop in a smart and reasonable way.”

The current height limits on the waterfront range from 40 feet to 84 feet.

The land is owned by the state and managed by the San Francisco Harbor Commission.

Opponents of the measure argued voters already had the power to oppose projects and the initiative would set a “dangerous” precedent for other planning projects throughout the city.

Jim Lazarus, the Senior Vice President of Public Policy with the San Francisco Chamber of Commerce, said the chamber believes the land commission is on solid ground with the lawsuit.

Lazarus said there are only a few parcels of port property that could likely be developed in coming years, thus needing voter approval, but he said the measure could unreasonably constrain what can be done on port property.

He said any development on the property should take into consideration what is best for the people of California and not just the people in San Francisco.

San Francisco Supervisor David Campos, who supports the measure, said residents should have a say in what is developed on the waterfront.