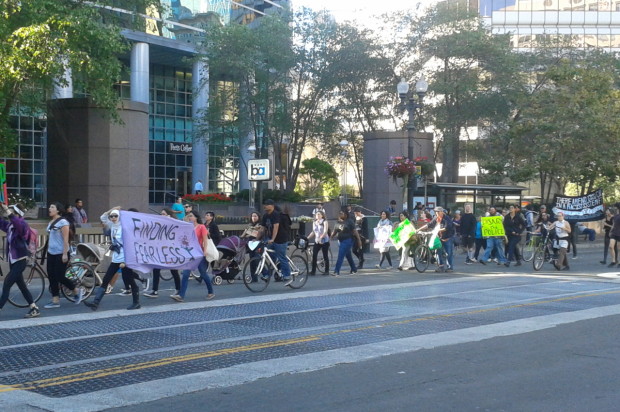 Freeway ramps in the downtown Oakland area have reopened this evening after a closure earlier this evening caused by a protest on city streets, according to the California Highway Patrol.

Protestors continue to march through city streets at this hour and a large police presence remains visible.

The Oakland protest and march is one of three that were scheduled for today in the Bay Area in response to the Aug. 9 police shooting of Michael Brown in Ferguson, Missouri. Another rally took place in San Jose earlier today and a third was scheduled to start at 7 p.m. in San Jose.

Over a week has passed since Michael Brown Jr., 18, was shot and killed by Ferguson police Officer Darren Wilson, but daily protests have continued in Ferguson, drawing a heavy police response.

In Oakland, organizers are drawing connections between Brown’s death and other police shooting deaths.

Speakers at a rally near Oakland police headquarters were expected to include Jeralynn Blueford, whose son Alan Blueford was shot and killed by Oakland police on May 6, 2012; Wanda Johnson, whose son Oscar Grant III was killed by a BART police officer at Oakland’s Fruitvale Station on Jan. 1, 2009; and Dionne Smith, whose son James Earl Rivera Jr. was shot by police in Stockton on July 22, 2010.