Out There in Style: Paul McCartney Closes Out Candlestick Park 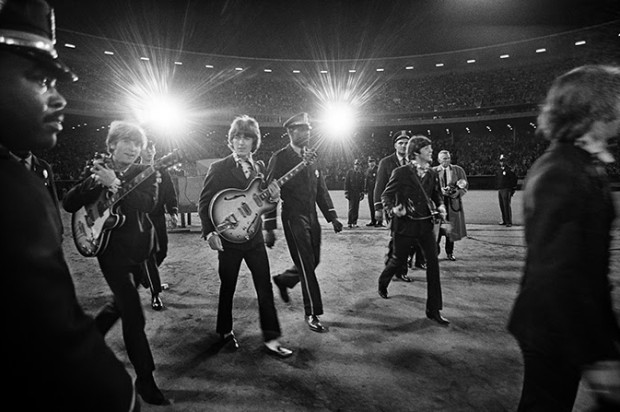 The city of San Francisco had failed to prepare its public transit behemoth for a capacity crowd at Candlestick’s final night. At its peak, getting to the ‘Stick took waiting in a line spanning five blocks to get to a shuttle bus that was barely acknowledged by SFPD officers feebly attempting to control traffic. The night’s narrative started with one such disgruntled Muni driver who first refused to let two renegade fans onboard in Bayview and quickly escalated to a busload of McCartney fans shuttling along the wrong side of the street towards the stadium.

We cheered. We tried to tip the driver (he didn’t accept, as tipping a Muni driver is pretty damn illegal) and walked en masse towards vinyl signs welcoming back Paul and heralding the end of an era. Those who wax poetic about Candlestick Park are the same people either filled with legitimate nostalgia for its place as an iconic venue, the house that heralded “the Catch”, and the bits of endurance it took to catch a Giants game in the park where home runs go to die. The other hoards just didn’t want a stadium in Santa Clara or, like an overwhelming majority of the fans, simply hadn’t shared the same history with the ‘Stick.

McCartney had. Just six years after Candlestick opened its now derelict gates, the Beatles would play their last show ever. Book-ending the stadium with McCartney was a fitting nod to history and also an emotional one. Never has Macca been so raw, so quietly emotive in the type of fragile way that speaks more to a heavy night of a positive send-out than simply phoning in a repeat of another famous show. As with his set at last year’s Outside Lands, he dug deep into his musical history, recounting Hendrix honoring the Beatles by playing through Sgt. Pepper’s Lonely Hearts Club mere days after its release only to knock his guitar out of tune and beg for audience member Eric Clapton (yep, that one) to tune it.

Some of the stories were the same and it is a truly lucrative position that San Francisco is in to even discern such a thing. There were, of course, unforgettable moments that will echo through Candlestick Park well beyond its demolition. “San Francisco Bay Blues” may have been played a respectable amount throughout McCartney’s Out There tour, but its reason comes from a woman named Shelly who’s also been on tour with McCartney. She’s in charge of handling ticketing and also a San Francisco native. McCartney showed love to his audio engineer, lighting designer, and the many roadies and stagehands helping to making the evening great right after playing the Beatles’ last song at the stadium, a cover of Little Richard’s “Long Tall Sally”.

“Candlestick, you were cool back then; you’re cool now. We’re gonna miss you,” McCartney said as his final, succinct send-off. Images flashed of that final Beatles show from nearly five decades ago: lucrative shots from iconic photographer Jim Marshall that had barely seen the light of day. In our society of over- sharing and exposure, it’s fairly easy to recount already what had happened just last night but to capture the essence of 50,000 people singing along to “Hey Jude” and cutting through the chill of Hunter’s Point with song, well, you just had to be there.

Paul McCartney setlist:
Eight Days a Week
Save Us
All My Loving
Listen to What the Man Said
Let Me Roll It
“Foxy Lady” interlude
Paperback Writer
Nineteen Hundred and Eighty-Five
My Valentine
The Long and Winding Road
Maybe I’m Amazed
I’ve Just Seen a Face
San Francisco Bay Blues
We Can Work It Out
Another Day
And I Love Her
Blackbird
Here Today
New
Queenie Eye
Lady Madonna
All Together Now
Lovely Rita
Everybody Out There
Eleanor Rigby
Being for the Benefit of Mr. Kite!
Something
Ob-La-Di, Ob-La-Da
Band on the Run
Back in the U.S.S.R.
Let It Be
Live and Let Die
Hey Jude

Encore One:
Day Tripper
Hi, Hi, Hi
I Saw Her Standing There