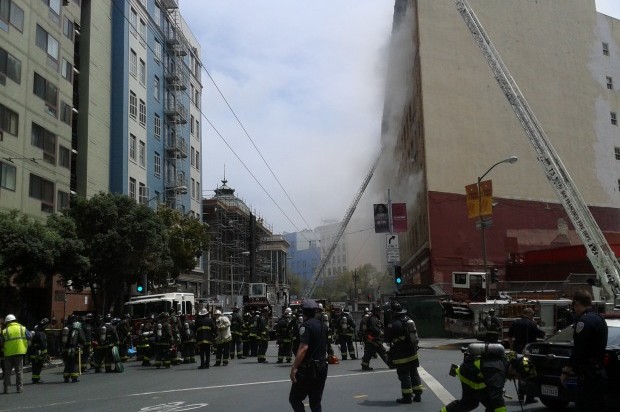 The California Division of Occupational Health and Safety has opened an investigation into two construction companies working on renovations at a former hotel in San Francisco’s Mid-Market neighborhood where a fire broke out Monday afternoon, a Cal/OSHA spokeswoman said today.

Eight construction workers were injured in the three-alarm blaze, which was reported at 12:03 p.m. Monday and extinguished at 3:22 p.m. at 45 McAllister St., the site of the former Renoir Hotel.

The property was purchased in 2012 by the Kor Group, which is renovating the eight-story brick building into a modern hotel.

According to Cal/OSHA spokeswoman Kathleen Hennessy, the site’s general contractor is San Francisco-based Pacific Structures and its subcontractor is Oakland-based Emerald Steel.

Seven of those injured were taken to a hospital for smoke inhalation. The eighth worker declined to be transported.

All of the injuries were considered minor, fire officials said.

About two dozen workers had been in the building at the time of the blaze, according to fire officials.

Hennessy said it appears most of the injured workers were from Emerald Steel and were performing industrial steel work.

Before the fire started, crews were installing studs onto an existing structure, she said.

Cal/OSHA is investigating if that welding work sparked the fire, she said.

The investigation also included the review of the safety records of both companies for the past five years.

Emerald has had no violations, while Pacific Structures has been inspected six times and was found in regulatory violation in June 2013.

The San Francisco-based company was cited $935 for issues with respiratory protection and piling of materials protocol.

Hennessy said the fire investigation, which includes a series of interviews with employers, workers and witnesses, is ongoing.