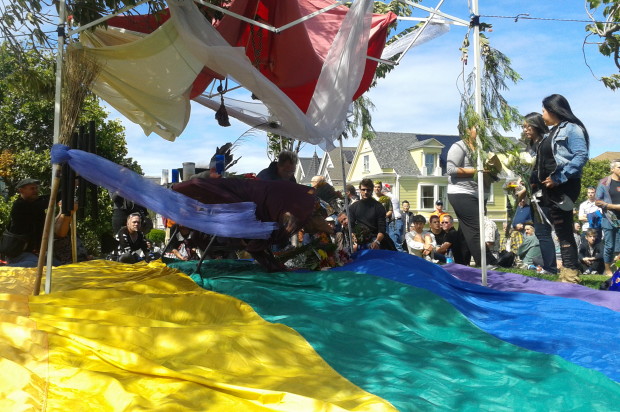 A somber memorial was held in San Francisco’s Duboce Park this afternoon as a brutally beaten man found in the area last weekend was taken off life support.

Bryan Higgins, who also went by Feather Lynn, was found on the ground at about 7:30 a.m. Sunday near the corner of Duboce Avenue and Church Street and pronounced dead at 3:33 p.m. today, San Francisco General Hospital spokeswoman Rachael Kagan confirmed this afternoon.

Police are now investigating his death as a homicide and are seeking a suspect described only as a white male in his 20s or 30s wearing a gray sweater, spokesman Officer Albie Esparza said.

Hundreds of mourners stood in a massive circle that covered nearly half the park as Higgins was pronounced dead. They stood silently except for the sounds of occasional sobs, children playing at a nearby playground and the warm breeze filling the trees.

The grief of some mourners was so pronounced they were barely able to stand, and had to be supported by the arms of friends standing at each side.

A tent was erected on top of a large rainbow flag lying in the center of the circle where mourners left flowers and other gifts. The smell of burning sage filled the air.

“I call upon the healing waters of the west, energy of renewal with tears that will cleanse your heart — let them flow,” one woman said as the ceremony began.

The memorial ended with some mourners releasing feathers that drifted into the wind.

San Francisco General Hospital officials were at first unable to identify Higgins, who was found without a wallet or ID. Media reports about his case led a neighbor to alert his family that he was in the hospital in critical condition.

Higgins married his husband, Brian Hagerty, at San Francisco City Hall in December. The two met in Michigan, where they both grew up, when they were 17 years old. They later moved to San Francisco together, Hagerty wrote on Facebook.

Higgins described himself on his Facebook profile as a “starving artist” who worked at Rosenberg Delicatessen at 276 Noe St., only a few blocks from where he was found.

San Francisco Supervisor Scott Wiener, whose district includes Duboce Triangle, said in a statement on Facebook today that he has been in communication with the police regarding the attack.

He said the police are conducting an extensive and thorough investigation to find the attacker and have good leads in the case.

Wiener linked the attack to escalating crime in the Castro and Upper Market areas.

“We get numb about it, because we see so much, but it needs to be addressed consistently. When you allow criminal behavior to go unchecked, it inevitably escalates and leads to violence,” Wiener wrote.

He said that smaller crimes in the area need to be addressed in order to prevent more serious crime and that understaffing in the city’s Police Department is preventing a larger presence in the area.