Hundreds Turn Out for ISIS Protest 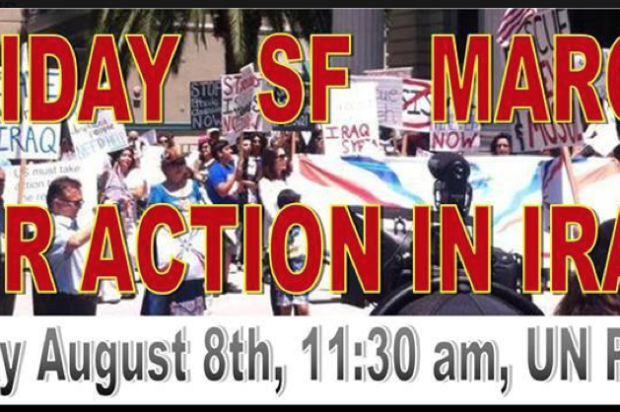 Hundreds of protestors took to the streets in San Francisco this afternoon to speak out against an escalating situation in Iraq in which an Islamic militant group is taking over portions of the country and killing and displacing thousands of civilians.

“There is a major crisis in the Middle East that is impacting the lives of thousands and thousands of innocent children and women,” said Rochelle Yousefian, a protest organizer and member of the Assyrian American Association of San Jose. “People have been slaughtered and women and kids have been sold as slaves for sex. People have been driven out of their homes.”

Planned several days ago, the protest occurred as the United State’s increased its involvement today in the crisis by sending military aircraft to bomb militant fighters pushing toward the Iraqi city of Erbil.

President Barack Obama announced Thursday he was authorizing air strikes to protect American personnel in the city and help save thousands of displaced Iraqi civilians stranded on a mountain.

“As ISIL has marched across Iraq, it has waged a ruthless campaign against innocent Iraqis, and these terrorists have been especially barbaric toward religious minorities, including Christians and Yezidis, a small and ancient religious sect,” Obama said Thursday. “Countless Iraqis have been displaced.”

Obama went on to say there have been “chilling reports” describing ISIL militants rounding up families, conducting mass executions, and enslaving Yezidi women.

The peaceful protest, escorted by more than a dozen police officers, paraded by City Hall and then headed to the San Francisco Federal Building on Seventh Street, where the protestors stood en mass for nearly an hour calling for Democratic House Minority Leader Nancy Pelosi to come down from her office and explain why more isn’t being done by the United States to support the Iraqi civilians targeted by the militant group.

The protestors stood out in front of the building chanting for Pelosi to speak to the crowd.

Pelosi never showed, but her office sent down a statement, originally released Thursday, in which she asserted her support of Obama’s actions.

“I support the President’s leadership to avert a massacre of the Yazidi people and other religious minorities in Iraq,” she said. “ISIS’s brutal treatment, depriving Yazidis of food and water in 120-degree heat on the mountain and threatening to slaughter them if they descend, is outside the circle of civilized human behavior.”

The crowd briefly booed Pelosi’s refusal to address the protestors but eventually marched away from the building.

There were no immediate reports by police of any arrests or incidents related to the protest.

San Jose resident Fedra Vardeh attended the protest and said she wanted to be a voice for the people who have no voice.

“They are people who have lived in Iraq for centuries, and they are being persecuted,” she said. “They lost their homes, they have lost everything they have, and now they are losing their lives.”

Demonstrators with the group World Can’t Wait planned a protest today at 5 p.m. to denounce the renewal of U.S. air strikes in Iraq. The protest will be held at the Powell Bart Plaza at Powell and Market streets.

“After the previous U.S. invasion and occupation of Iraq took more than 1 million Iraqi lives and displaced millions more, U.S. police then fueled the sectarian strife that both ISIS and the Maliki government strive on,” World Can’t Wait spokeswoman Stephanie Tang said in a release.” Adding more U.S. weaponry to the mix brings yet more death and destruction, further embittering the peoples of the region toward the West.”

Yousefian said more should be done to stop the “ethno-religious cleansing” that is displacing people from their land and homes.

She said she’s particularly disturbed by pictures coming out of the region that depict children beheaded by the group.

“No animal would do that to another animal of its own kind, but humans are doing it,” she said. “This is a violation of human rights, and no human rights organization is taking steps to protect the Assyrians, the Christians of the Middle East.”