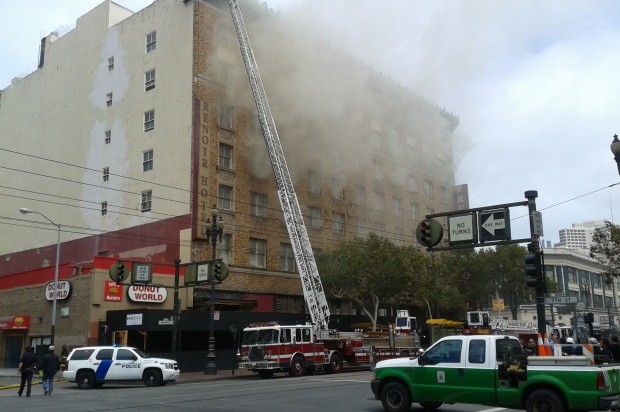 A fire at a former hotel under renovation in San Francisco’s Mid-Market neighborhood Monday caused more than $1 million in damage, a fire spokeswoman said today.

The three-alarm fire was reported at 12:03 p.m. at 45 McAllister St., at the former Renoir Hotel.

The fire was called under control at 3:22 p.m., according to fire spokeswoman Mindy Talmadge.

There was an estimated $1 million in damage to the building and $200,000 of contents were destroyed, she said.

Talmadge said the fire was heaviest between the second and third floors of the eight-story building. She said flames spread through the lightwell to the top of the building.

According to Talmadge, most damage from the fire is not visible from the brick exterior.

No one was living in the building, but nearly 24 construction workers in the building were able to get out. Seven workers were taken to the hospital for smoke inhalation, she said.

She said all the injuries were considered minor.

The California Division of Occupational Health and Safety is also investigating the blaze at the site, she said.

The hotel was purchased by the Kor Group in 2012 and is being renovated into a modern hotel.

According to the company’s website, the Renoir is a 135-room landmark hotel built in 1909.

Under the renovation plans, the new hotel will have lobby with an open floor with new restaurants and cafes.

The cause of the fire remains under investigation, Talmadge said.