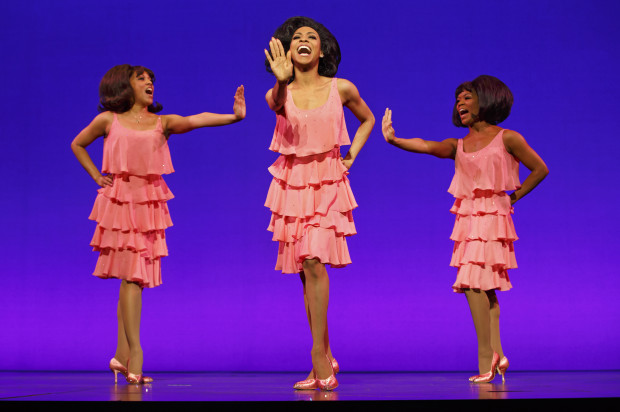 It’s too bad Berry Gordy can’t make an on-stage appearance at the end of every performance of Motown: The Musical, as he did at San Francisco’s Orpheum Theater on Tuesday night, because the 84-year-old legend nearly brought the house down dancing jubilantly with the cast. It was a hell of an end to the entertaining and slightly exhausting jukebox musical.

Gordy wrote the show’s book, and it’s loosely based on his 1994 autobiography, detailing the rise of his music empire, from 1938 to 1983. The legendary 25th anniversary TV show serves as the musical’s framing device. Act one opens with energetic dueling performances by The Temptations and The Four Tops as they rehearse for the show, while an aging Gordy (Clifton Oliver) is home, lamenting the loss of so many of the names he helped create as they moved away from Motown and on to bigger paychecks. Will he actually show up at the anniversary show?

The time then moves to the past, making a quick stop in Gordy’s childhood (the fight between Joe Louis and Max Schmeling was a pivotal point for Gordy as a child), eventually settling on Gordy as a young man and songwriter. After writing some songs for Jackie Wilson (“Reet Petite” and “Lonely Teardrops”) Gordy decides to pursue songwriting and producing full-time, and “Motown” (the naming of the company is an amusing moment) is born.

The pace of the show is breakneck, with over 50 songs from Motown (and other Berry labels) performed. Of course, not all of the songs are done in full, so one song often blends into another, and the groups performing those songs aren’t always clear (for instance, if you aren’t a fan of The Temptations and The Four Tops you probably won’t know just which is which).

A lot of groups and singers are portrayed over the course of the almost three-hour musical, with much of the cast playing three or more different roles. The show’s major focus is the relationship between Gordy and Diana Ross (Allison Semmes), who Gordy meets when she’s still in high school, and hanging around Motown with her group, The Primettes. He sees something in the group, and especially the one “with the big eyes.” The Primettes become The Supremes, and after many failed songs, eventually ends up as Motown’s biggest act.

Semmes does a good job of mimicking Diana Ross’s smile-filled singing style, and her voice is dead on, though the big eyes everyone keeps talking about…aren’t. Smokey Robinson (Nicholas Christopher), Gordy’s best friend, and Marvin Gaye (Jarran Muse), his brother-in-law (at least for a while) are the two other main characters, and both actors are great, particularly during the songs. Of course, the whole cast does a lot of singing, so much so that there’s not a lot of room for plot. Events happen at breakneck speed. Hit records are being made, groups split up, Kennedy gets shot, and then war protest breaks out in what seems like 10 minutes time. Die-hard Motown nerds will probably have a hard time with all the liberties taken with the musical timeline.

Because there are so many songs, there are a few times when tunes are used in an expository way. Sometimes this works, (when Smokey Robinson must face angry Alabama police on stage while singing “I don’t like you/but I love you” from “You Really Got a Hold on Me”), and sometimes it doesn’t, (Diana Ross sings “I Hear a Symphony” while laying in bed next to an impotent Berry Gordy; but perhaps the awkwardness of that scene was amplified because Berry Gordy was sitting in the row in front of me).

A lot of ground is covered in the first act, while act two focuses on Gordy’s move to Los Angeles, the discovery of the Jackson 5 (Reed Lorenzo Shannon is fantastic as young Michael Jackson), disco, and the looming threat that the label will have to fold as more and more artists–including his beloved Diana–move on to bigger things.  But Gordy vows to fight, releasing even more hits. (He seems to remember he’s got Stevie Wonder in a closet somewhere, as Wonder makes a brief appearance as a child in act one, and isn’t heard from again until the end of act two).

By the time the finale and the 25th anniversary reunion arrived, I was just plain tired, and couldn’t blame them for completely overlooking Michael Jackson’s immortal performance during that show. Who’d have the energy for that?

Motown: The Musical plays the Orpheum Theater through September 28th.