Appealing TV: Black Jesus, Garfunkel and Oates, and The Knick 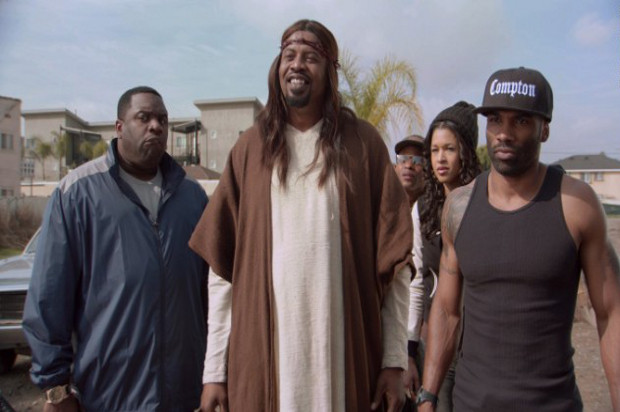 The amount of new shows premiering this week leads me to think that the 52-week season is a genuine thing. Are we all training for the official kickoff of the 2014-2015 television season in September?

Monday, August 4
Partners (9pm, FX, series premiere)
“Partners is a smart, edgy legal comedy highlighting the cultural contrast between the haves, the have-nots, and the ‘Aww, Hell-No’s'” is the last sentence is the copy cherry on top of the fever dream cake pairing of Martin Lawrence and Kelsey Grammer. Which is marketed as the pairing that nature never intended, which no, is not how nature works. A person fucking a horse is a pairing that nature never intended, unless you got your nature education from Professor Black Guy Doing White Voice at Def Comedy Jam.

Wednesday, August 6
Top Chef Duels (10pm, Bravo, series premiere)
I remember thinking that Chopped was just a way to reverse engineer the finale episodes of Top Chef, and then Top Chef Duels is just a way to do them one better. Now that I think about it, that almost makes it like they’re just trying to rejigger Iron Chef America, swapping out the theatrics for an all-star cast veneer, than pit them against some random sous-chef of some French bistro in Champaign, IL.

Thursday, August 7
Garfunkel and Oates (10pm, IFC, series premiere)
By their comedy powers combined, Kate Micucci and Riki Lindhome, are known as Garfunkel and Oates (Micucci is Oates, Lindhom is Garfunkel). Now they’re coming to IFC, playing versions of themselves. You can watch the pilot episode early.

Black Jesus (11pm, Adult Swim, series premiere)
In 8th grade, my friend depicted Jesus as a black man and it pissed off my classmate something so awful he was asked to leave the classroom to cool off. I’m gonna say that Black Jesus is getting her due daps. Chronicling the adventures of Black Jesus in Compton, the show is created by Boondocks creator Aaron McGruder and written/directed by Trailer Park Boys creator Mike Clattenburg. And of course people would be offended.

Friday, August 8
Jonah from Tonga (10pm, HBO, series premiere)
After the middling Ja’mie Private School Girl, Chris Lilley returns with another spin-off series of one of his characters from the past. This time he’s playing Jonah (you may remember him from Summer Heights High), a Samoan delinquent with a penchant for penis graffiti and breakdancing. And, if you remember, Lilley does it in brown face.

The Knick (10pm, Cinemax, series premiere)
Starring Clive Owen, and with all ten episodes of the first season directed by Steven Soderbergh, this period piece focuses on New York’s Knickerbocker Hospital in the early twentieth century. So it’s Mad Men, but instead of social mores, it’s about lack of medical care!

Saturday, August 9
Outlander (9pm, Starz, series premiere)
Well, it’s no Martin Lawrence in Black Knight, I will tell you that. This show is based on the Romance Writers of America’s Best Romance book of 1991, about a British army nurse transported from 1945 to 1743 Scotland. Romance! intrigue! Lack of medical care! Developed by Battlestar Galactica re-imagineer Ronald D. Moore!

Sunday, August 10
Food Network Star (9pm, Food Network, season finale)
Find out which reality show contestant will become the next Food Network flame-out, wash-out, or person most likely to be eventually relegated to doing spots for Rotel in-between segments of Diners, Drive-Ins, and Dives. Speaking of, it’s Emmy-nominated Guy Fieri, to you.

Fat Guys in the Woods (10pm, Weather, series premiere)
“Off the couch, into the weather,” and with it the tenuous grasp between a survival series and the fact that it’s on a channel that used to be all about the five day forecast. This show is from the same bullshit idea factory that developed the sitcom trope of men characters who can’t hack it camping in the woods. This is the same nightmare factory that thought that marketing Dr. Pepper Ten to men (it’s not for women) was a good idea.

Gym Rescue (10pm, Spike, series premiere)
Instead of bars, it’s gyms! And instead of Jon Taffer sounding like he’s gonna quack like Daffy Duck when he flips his shit, it’s UFC castaways, now Bellator-Spike-Viacom concubines Randy Couture and Frank Shamrock. Listen, if the same voice over guy who does the expository segments on Bar Rescue does the same on Gym Rescue, but for like nitric oxide levels and tabata protocols, than I am in.