A few weeks back, I reviewed the stage musical version of director John Carney’s movie, Once. There were some aspects I liked more than the movie–mainly, that the male lead is more likable than in the movie–but both versions fall short when it comes to the female lead. I wanted more of her story.

Begin Again almost seems like a direct reaction to that complaint, as the musical lead this time around is a woman, played by Keira Knightley, and her muse and cheerleader is a guy, played by Mark Ruffalo. Like in Once, there’s some romantic tension between them, and the question of “will they or won’t they” does linger for much of the movie. But the meat of their relationship is musical, as he produces her demo on the streets of New York City. (They decide to record all the songs live and outdoors, an interesting concept that, unfortunately, doesn’t carry over to the movie’s actual soundtrack.)

Adam Levine is perfectly cast as Knightley’s d-bag boyfriend, and some other real life musical talents, like CeeLo Green and Mos Def, also make appearances. And immediately after seeing the movie, I wanted to download most of the songs. Knightley doesn’t have what I’d call a powerful voice, but it’s pretty, and her songs are as catchy as the best tunes in Once. How long till this one makes it to Broadway? 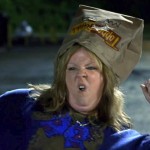 Melissa McCarthy is back playing a disheveled semi-loser in a comedy she wrote with her husband, Ben Falcone, who is also the film’s director. Susan Sarandon co-stars as her grandmother, and partner on the film’s central road-trip. Melissa McCarthy is a funny, funny lady, but I’d love to see her branch out a bit in her movie career.  She’s allowed to play one half of a romantic couple weekly in TV’s “Mike & Molly,” so why can’t she do that in movies? Let’s get the gal a romantic movie comedy of her own, stat! 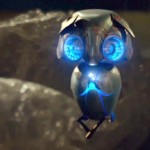 E.T. but with a mechanical, alien version of the Tripadvisor owl.

Deliver Us From Evil – Everywhere

From the director of Insidious and The Exorcism of Emily Rose comes yet another “I hear noises….what is that?….I don’t see anything…BOOOO!” movie. Demons, and children, and Eric Bana, oh my! While I am getting pretty tired of this genre, I will grant that the above teaser trailer is effective. Plushy toys are always terrifying!