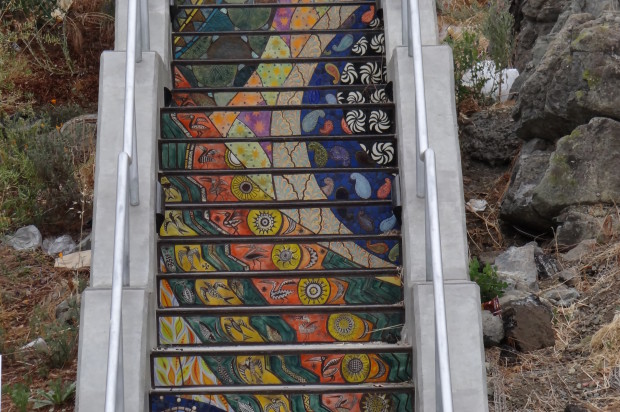 Members of San Francisco’s Bayview community came out this afternoon to dedicate a new staircase mosaic near the city’s India Basin Shoreline Park.

Walker, who was at the ceremony, also has a nearby street named for him.

The mosaic is a $1 million San Francisco Arts Commission project that came together in collaboration with the city’s Department of Public Works, neighborhood residents and youth from the Willie Mays Boys & Girls Club along with young adults from the San Francisco Conservation Corps.

DPW inherited the project from the now-dissolved state Redevelopment Agency. The steps were completed in April.

Public Works Director Mohammed Nuru credited the colorful project to community involvement and said that with the addition to the neighborhood “it’s starting to feel like we are on the other side of town.”

Cohen praised the hard work that went into the staircase project and its expected impact on the area, which is often plagued with blight and crime.

“These 87 stairs are quite literally a bridge between public housing and open space,” she said.

Unlike the old staircase, which had fallen into disrepair, she said these steps “have received a whole lot of love. They have turned into something the whole community will be part of.”

Cohen, who said the public artwork is dedicated to Walker for his “passion and dedication to the community,” also thanked the artists, students and workers who put the mosaic steps together.

“Art is a vehicle to share our culture and heritage,” she said.

The artists behind the design of the steps, titled, “Flights of Fancy,” Aileen Barr and Colette Crutcher, also attended today’s event and said the design is inspired by patterns from cultures around the world, such as Indonesia, Ghana and South American countries.

Many of the young students who helped design the tiles for the mosaic and even created a few squares were at the ribbon-cutting ceremony.

Conservation Corps workers, who helped install the tiles and cleared the area near the hillside steps and planted wildflowers and other plants along the walkway, were also at the event.

Nuru said other staircase beautification projects are in the works throughout the Bayview including on Thomas Avenue and Third Street; Hester Avenue and Bayshore Boulevard; and on Jamestown Avenue near Candlestick Park.