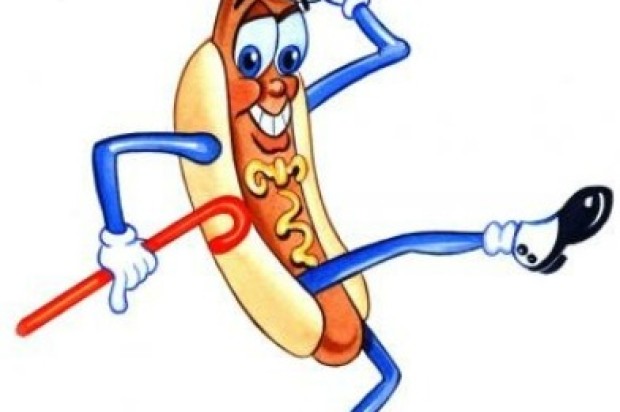 Joey “Jaws” Chestnut set the world record for hot dog eating last year with a stomach-churning 69 dogs, but needed to scarf only 61 this year to hold onto his title, contest officials said.

He also popped the question to fellow competitive eater Neslie Ricasa, who competed in the women’s portion of the event but lost to Miki Sudo, who downed 34 hot dogs.

Ricasa posted a picture of her diamond engagement ring on Twitter, and said today was “The best 4th ever!”

“So much love from so many people, thank you all so much! I love you @joeyjaws!” she wrote. His runner up for the second year in a row was fellow San Jose resident Matt Stonie, who ate 56 hot dogs.

Chestnut is the first person to win eight consecutive contests, held annually on July 4 since 1972.

She said she cried when he proposed to Ricasa, and while she was wondering when they would get engaged, “He surprised me I didn’t know he was going to do it.”

“She’s got heart but not jaws,” Alicia Chestnut said of Ricasa’s loss in the women’s contest. “Now she has ‘Jaws.’”

She said that her son graduated from college last year and is looking at getting steady work, but for now he’s making enough money through competitive eating and public appearances.