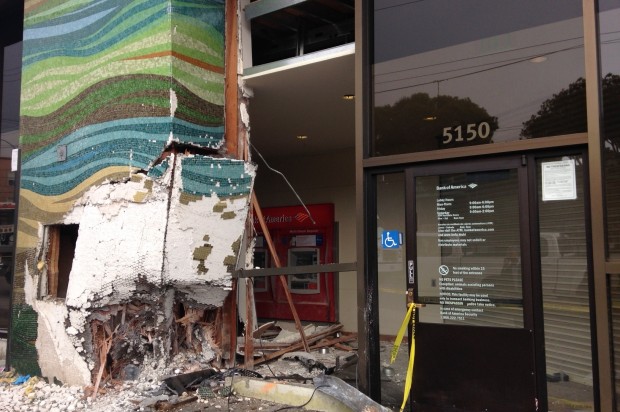 10:29 AM: A woman suspected of DUI has been hospitalized with serious injuries after crashing into the front of a bank in San Francisco this morning, a police spokesman said.

The woman crashed a white Mazda sedan around 5:50 a.m. into the Bank of America branch at 5150 Mission St. near Geneva Avenue, according to San Francisco police spokesman Officer Albie Esparza.

The driver was speeding on southbound Mission Street and was believed to be under the influence when she nearly struck a San Francisco Municipal Railway bus, then hit the curb and headed into the building on the west side of Mission Street, Esparza said.

The woman, whose name was not immediately being released, was taken out of the car with life-threatening injuries. She remained at San Francisco General Hospital this morning, Esparza said.

No other people were injured and the bank was closed and empty at the time of the crash, he said.

The car was destroyed in the crash, he said.

This morning, the front of the building was crumpled where the car had struck the front entrance. A green-and-blue tiled column was smashed and several windowpanes had shattered.

Bank employees standing outside the building said the bank would not be opening today.

According to Esparza, the damage to the building is cosmetic and no other buildings were damaged in the incident.

Rose said initially after the crash, the street was blocked off and bus service was affected. However, the road reopened shortly afterward and buses were able to continue on their routes.

7:31 AM: Police responded to a vehicle that crashed into a Bank of America in San Francisco this morning, a police spokesman said.

Officers responded to the solo-vehicle crash at a Bank of America at Mission Street and Geneva Avenue around 5:50 a.m., Officer Albie Esparza said.

A white sedan crashed into the building next to a bus stop.

The female driver was transported to San Francisco General Hospital but Esparza did not know the extent of her injuries.