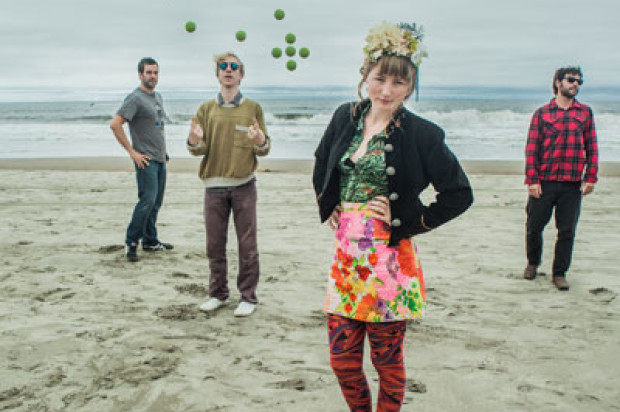 It’s rare that just one song can grab someone anymore and leave them legitimately waiting for more material to surface. In a society hellbent on ever-increasing instant gratification increasing even more, the charm of the single has most certainly lost its luster. The first band in a long, long while to work the kind of radio magic that once made top 20 countdowns the end all, be all just happens to call San Francisco home.

Be Calm Honcho began in the city after frontwoman Shannon Harney met guitarist and multi-instrumentalist Alex Weston at UC Davis. Eventually the duo linked up with Jacob Landry and Michael Carrera, the latter pair part of a band that Weston had auditioned for; a seven-piece seeking a juggling musician. Weston not only juggles, he performs “kind of juggling that gets you girlfriends and makes you nemeses,” Harney tells the Appeal.

Harney speaks entirely as you’d expect after a firm listening of spoken word gem “Mean Pack.” An eloquence that rejects patois, her description of her bandmates nearly collapses into a rhythm of syllables itself. Her love of slam poetry began in high school and carried on through college, where she was in the spoken word group the Sickspits. There’s a bit of theater nerd in her as well, as a self-described “Thespian Society diva”.

That experience is what ultimately inspired the road trip that lead single “I Love CA” is based off, a lament meant for residents of the state as well as the displaced. “The riff for the song is a super reverbed interpretation of the old stax sound,” Harney explains.

“The song is telling the story of a trip I took to Big Sur with some old high-school cronies last May. We all came up doing theatre together in Palo Alto but they all live in New York now as actors and writers and it’s such a momentous occasion when we all make time to revere California’s treasures together like the old days. They’re always extra sappy and sentimental.”

The band further reminisces when asked about the venue they’ll be playing for their record release show, the Rickshaw Stop. Guitarist and bassist Jacob Landry hopes to recreate the energy of Monotonix, whom he saw there just a few years ago. “The singer jump[ed] off of the balcony. Also, they crowdsurfed the drummer with his drum kit and a dude in a wheelchair,” Harney says.

“We’re pretty much going off of that show to inform the decisions we’ll make at Rickshaw.”