Extinction, huh? Does that mean after this one, (the fourth!) there will be no more? Please?

Mark Wahlberg is the human lead this time around, and the Dinobots are also making their first appearance in the franchise. I’m a little surprised San Francisco isn’t the film’s focus of destruction, though. I guess Godzilla and the upcoming Rise of the Planet of the Apes filled our yearly movie destructo quota? 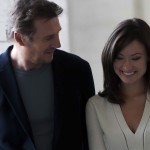 Bless Paul Haggis; I think his heart in in the right place. I believe he really does want to make movies that help the world connect. But I also think Crash was the dumbest, most ham-fisted “message” movie to ever win an Oscar. And that’s saying something; the Oscars are terrible!

This looks like a return to Crash territory: a convoluted, multiple character drama wherein all the people have some kind of underlying connection. It was filmed in Paris, New York, and Rome, so at least, along with pretty people Liam Neeson, Olivia Wilde, Mila Kunis, James Franco, (ANOTHER movie, James??  Really?), and Kim Basinger, there will be pretty scenery to look at when you aren’t rolling your eyes.

Wanna get depressed? Check out this documentary about the Koch brothers, how money controls politics, and why the Citizens United ruling by the Supreme Court will screw us all over, big time.