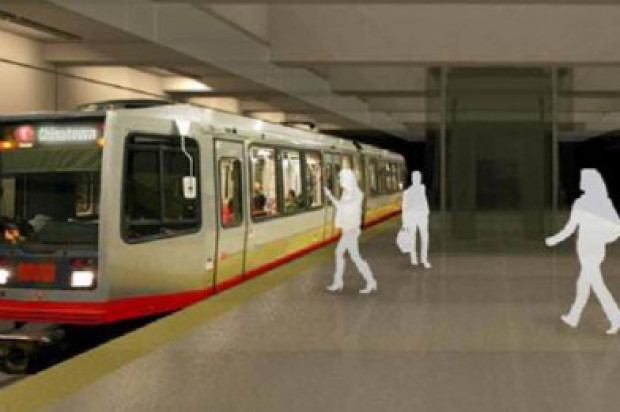 San Francisco Mayor Ed Lee and other city officials marked a milestone in the Central Subway project this morning with the completion of tunnel boring from downtown San Francisco to North Beach.

Two boring machines, affectionately named Mom Chung and Big Alma after historical San Francisco women, made it 8,500 feet to the former site of the Pagoda Palace Theater earlier this month after about a year of digging two underground tunnels.

The tunnels will connect the San Francisco Municipal Railway T-Third line from the South of Market area through Union Square and into Chinatown.

Lee hailed this stage of the project as the “most important milestone,” noting that “the biggest part of the tunnel is finished.”
He called the project “an expensive one, but it is well worth the future of San Francisco.”

Lee commented on the crowded 30-Stockton bus route and Stockton Street corridor. He said that the underground route aims to shorten travel time by more than half along the Chinatown thoroughfare.

The 750-ton tunnel boring machines traveled about 1.5 miles to excavate the northbound and southbound tunnels about 20 feet in diameter at a pace of about 40 feet per day. The tunnels are anywhere from 40 to 120 feet below ground along the route.

Mom Chung arrived first at the retrieval site at Powell and Union streets on June 2, followed by Big Alma last Wednesday. Mom Chung had been launched in June 2013 and the other machine left the launch station in November. The launch area was built at Fourth Street underneath the Interstate Highway 80 overpass in the city’s South of Market neighborhood.

San Francisco Supervisor David Chiu, whose district includes Chinatown, said at the retrieval site, “I’ve never been so happy to see a massive hole in the ground.”

Chiu touted the project’s efficiency, calling the subway on time and on budget. He credited residents and community leaders for pushing to alleviate congestion in one of the densest neighborhoods outside of Manhattan.

Chiu said he “had a vision” of the tunnel connecting the subway to North Beach and Fisherman’s Wharf as well.

Supervisor Scott Wiener said with a growing population in San Francisco, “We don’t have the space. We have to keep moving forward with our public transportation capacity.”

He echoed Chiu’s calls for better north-south connections and a more efficient way to get workers, residents and tourists to Fisherman’s Wharf.

“We need to stay the course,” Wiener said.

Following the arrival at the so-called finish line, the two machines will be dismantled in the coming months and eventually will be reused in other boring projects in other cities, according to SFMTA officials.

An above ground station will also be built at Fourth and Brannan streets.

A group of Central Subway supporters, part of the group SF NexTstop, carried signs on Powell Street that read, “Finish the Subway,” advocating for a subway extension to the Fisherman’s Wharf area.

Group leader Julie Christensen said the F-Market & Wharves Muni Metro and 30-Stockton bus lines aren’t reliable forms of transportation for the many workers, residents and tourists that come into the area daily.

“There’s a moat of congestion around Fisherman’s Wharf,” she said.

She said the group has proposed another station at Joseph Conrad Square at Columbus Avenue and Leavenworth Street or the Kirkland Yard bus storage center near Pier 39 on Beach Street.