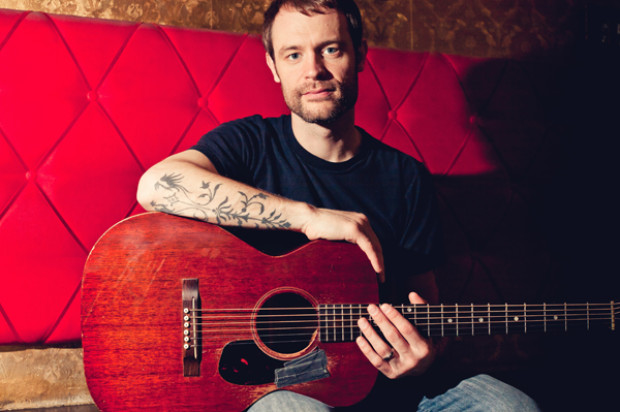 The contemporary music scene tends to thrive on exclusivity, world premieres, and the type of loosely-marketed events that make graffiti a la Arcade Fire a point of interest and see livestreams of single songs on NPR’s First Listen site. (looking at you, Spoon). Those ready for a bit of newness need only wait until Wednesday when Rocky Votolato brings his latest material to Bottom of the Hill.

The singer-songwriter spent the past eight months at home in Seattle sorting through some complex feelings with music by his side. A combination of disillusionment and touring fatigue left Votolato close to rejecting his more intimate style in favor of simply playing music for the sake of itself.

“My writing tends to reflect life and each album is a reaction to the last,” Votolato tells the Appeal. “I’m looking to make something more from the heart because that album [2012’s Television of Saints] was less thought out. Television of Saints was my distancing from art while True Devotion was super close and personal. It was a very vulnerable record.”

For Votolato, the interconnectedness of his work puts his eight albums on par with a memoir at war with its medium. 2012’s Television of Saints was a breezy, light look at what the singer-songwriter is capable of when faced with a slightly more shallow lyrical palette and the occasional guest spot from brothers Sonny and Cody, the latter of whom will be joining Votolato on his current West Coast tour.

Cody plays guitar for post-hardcore outfit the Blood Brothers, who are set to reunite this summer for Los Angeles’ FYF fest. Rocky’s tour proved to be the perfect time for Cody to add a bit of an edge to what tends to be mostly mellow performances.

“It’s a totally different kind of feeling to be playing with just one other person. I always like to bring a band to festivals though,” Votolato says of his performance strategy. “It’s hard to carry that intimate acoustic solo show at a fest. You just don’t have the same type of connection. I feel like rock bands can get away with a lot more.”

With an extra player, fans may also see some of Votolato’s more haunting work – particularly the material that made it onto his groundbreaking Makers. There’s one song in particular that the musician has a full circle connection with and is perhaps the best indication of his relationship with the world around him. Maker’s third track “The Night’s Disguise” was recorded with Whiskeytown guitarist Phil Wandscher, who penned the hauntingly dissonant electric guitar part.

“He’s one of my idols and he ended up coming in and writing that part. He was always really grateful. It was one of the most perfect moments,” Votolato says.

Expect a similar serendipity when Votolato takes the stage this Wednesday, June 11 at Bottom of the Hill. Purchase tickets here.