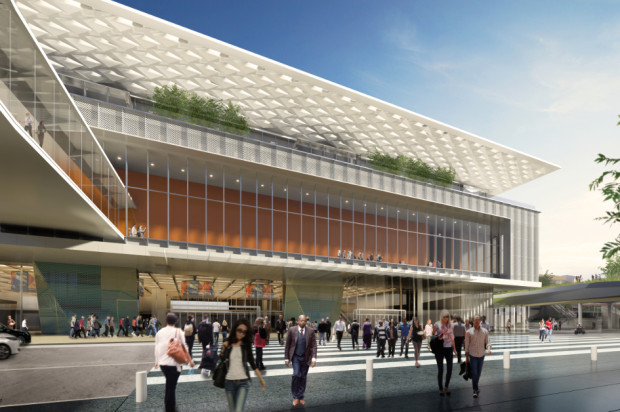 Come 2018, San Francisco’s Moscone Center will be bigger and greener, with more accessible retail and open spaces surrounding it.

City officials today announced plans for the center’s $500 million expansion project, scheduled to begin in December and end in fall of 2018.

Department of Public Works Director Mohammed Nuru says two thirds of the cost of the project will be covered by hotel room taxes, and that the remaining third is being paid through the City’s general fund. At this time, he says they don’t foresee the project going over budget because the architect and contractor were both involved closely in the planning.

Inside the center, the design will connect currently non-contiguous spaces and expand them by 75,000 square feet, to make a total of 500,000 square feet of space available for exhibitions. The new design will also open that space up with expansive views of the city.

Skidmore, Owings & Merrill LLP is the architecture firm responsible for the project, along with Cavagnero Associates. Skidmore partner Craig Hartman says the expansion will amend some aspects of the current design for exterior spaces that, “after 20 years of use haven’t performed as well as we might’ve hoped.”

Hartman said those aspects include the way the current exit ramps along Howard and Third streets cut off pedestrian access to the sidewalks, as well as the cumbersome bridge connection between Yerba Buena Gardens and the carousel.

More retail space in the new design will also make the area feel more alive when conferences aren’t taking place, Hartman said.
“We see this as an opportunity to break down this large scale and begin to crate porosity, or urban connections from the street into public spaces,” Hartman said.

On Howard, the design eliminates all the exitways from below grade, and surface-level parking on both sides of Howard Street will be removed to widen the sidewalks.

Laurie Armstrong with the San Francisco Travel Association says the plans will make San Francisco more competitive with other cities such as Las Vegas, Los Angeles, Boston and New York – cities to which San Francisco is losing convention and tourism contracts.

This is a necessity, as tourism is the number one contributor to the city’s economy, and, according to the Travel Association, Moscone Center is responsible for more than 20 percent of that contribution.

Without the improvements, the Travel Association estimates the city could lose $2 billion between now and 2020.

Department of Public Works Senior Project Manager Brook Mebrahtu says a plan for mitigating traffic impacts has not yet been submitted to the city’s Municipal Transit Agnecy.

That plan should be submitted with the MTA within the next six months for internal review, Mebrahtu said.

However, Mebrahtu says the plan will include electronic signs and people on the streets helping to direct traffic during the four years of construction.

The new Moscone Center will also have less of an environmental impact than the current one, with the lowest carbon footprint per user of any convention center in the U.S, Hartman said.

According to Hartman, the existing Moscone buildings were built below grade, under the water table. As a result, water has to constantly be pumped out of the foundations.

Hartman said that water currently goes into the City’s collected sewer and storm water system, and into a water treatment plant. When it rains, the treatment plants can be overwhelmed, and less treated water ends up in the Bay.

“We are disconnecting that and using the collected water for toilet flushing and to irrigate the gardens and playground and surrounding trees. It’s actually going to produce more water than it takes away,” Hartman said.

More details about the expansion project can be found online at mosconeexpansion.com.