Falling Slowly: Once, the Musical 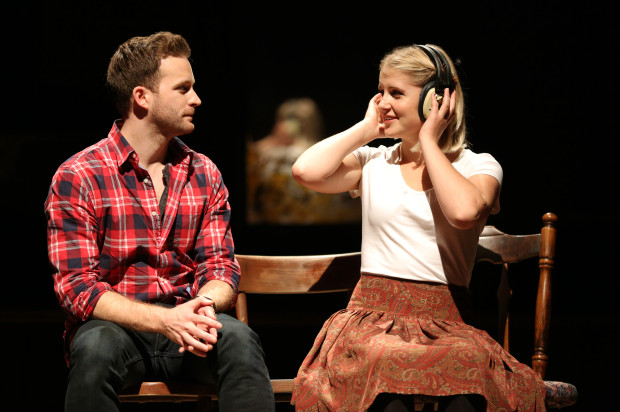 I liked the 2006 film Once well enough, but didn’t fall madly in love with it as many of its fans did. I certainly understood the appeal of the film, and a few of the songs made it to my iTunes, but I couldn’t get past feeling like the male lead was a huge…jerk.

In 2012, the stage musical based on the film made its Broadway debut, and it went on to win eight Tony awards. The traveling company of Once now comes to San Francisco for a three week run at the Curran Theater.

The basic story from the film remains: A young Czech woman hears a young Irish man singing a passionate song to a group of listeners who are…slightly less passionate about him, and he’s on the verge of quitting his music for good. But she is enraptured, and convinces the man to let her hear more. This involves the fixing of a vacuum cleaner, and a visit to music store owned by a very animated musician who knows karate. Yes, the show is quirky.

The man and woman are nameless in the play, known only as the Guy and the Girl, and are played by Stuart Ward and Dani de Waal. The Girl is also a musician, taught piano by her father back in Czechoslovakia–before his own musical career was cut short by arthritis and he killed himself, so she has personal experience with moody musicians. She’s such an encouraging, engaging, and positive force that the guy can’t help but go along with her plan to record a demo. He’s also a bit smitten with her, while she is reluctant to return his affections, as she has a daughter, and hopes to reconcile with her estranged husband.

What sets Once apart from your standard musical is that every actor is also part of the musical’s orchestra. They all play their respective instruments while on stage, sometimes dancing at the same time. (Although the “dancing” is more like subdued movement, not your typical big numbers.) There are usually at least 10 people on stage at any time, filling out such roles as the girl’s mother, fellow Czech immigrants, a banker with musical aspirations of his own, and local Dublin pub goers and musicians.

The cast moves around a set that looks like an Irish pub, and in a really fun move, the audience gets to become part of the action, as the stage is opened up for theatergoers before the curtain and during intermission. You can walk on to the pub set, buy an ale, wine, or water, and get a close-up look at it all. Slowly, some of the show’s cast makes its way on stage with some instruments and starts to play a few songs, surrounded by the audience. Eventually, the stage empties of its guests, and the play begins.

The energy of these interactive moments aren’t matched entirely within the musical proper. There are terrific songs throughout–“When Your Mind’s Made Up” and the Oscar winning “Falling Slowly” being the stand-outs, (and that one’s performed, ironically, more than once). But sometimes the show is maddeningly slow, grinding to a halt for subdued musical numbers with languid dancing that do nothing to advance the plot.

The central relationship between the guy and the girl is a bit more overtly romantic than it is in the movie. As a result, he comes off as less of a pushy jerk, which is a welcome change. But the story is clearly his, and the girl is there to be his champion and muse; her goals appear to be nothing more than to be a good mother and wife, playing piano at home, while the guy is persuaded to pursue his musical dreams in the Big City. I wanted more for her character, especially since Dani de Waal has such a terrific voice, and is only given one solo song in which to showcase it (the lovely ballad “The Hill”).

I’m not sure how fans of the movie will take to this version, as the film definitely had such a genuine, local Irish community energy, that it almost felt like a documentary; the actors here are, for the most part, clearly NOT Dubliners.  That authentic feel is almost captured during those moments of interaction with the audience. But when that proverbial curtain rises, it floats away.