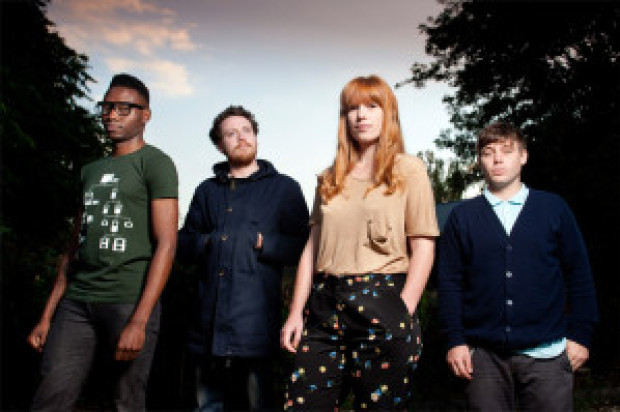 If you’ve been keeping up with the weird news of the world, (read: Texas) you’ve probably seen the live footage of a $700,000 mansion overlooking Lake Whitney burning to the ground. The decision came after two weeks of abandonment and a “condemned” notice, as it and parts of the cliff it had been built upon slowly began crumbling into the lake below. For electropop outfit Metronomy, they’ve taken to a similar strategy to allow their whole picture perfect facade to come crashing down bit by bit.

Abandoning their usual tactics, and instead taking to analog recording a la London’s Toe Rag Studios, Metronomy set a course for the nostalgic on their latest album, Love Letters. Frontman Joe Mount dove right into the process, seeing the value of a different medium from the technology he’d grown accustomed to using.

“I wanted to see what the studio portion of things were like and what analog would mean for these songs. Taking a band from electronic to analog is quite a task. The experience of recording is what keeps you going. That’s your longevity: making something interesting,” Mount tells the Appeal.

Love Letters slows the pace of a frenetic Metronomy. Particular highlights include “I’m Aquarius” and “The Most Immaculate Haircut”, both of which come tapping along like a light rain. As Mount describes Portland as “half-sunshine, half-rain” on our phone interview, so his music feels like a Pacific Northwest dream.

The band’s current sound – which, mind you, is ever-changing – pairs perfectly with the rainier side of things, netting the band much acclaim in their home country of England. The band was recently nominated for a Mercury award, something Mount wasn’t quite anticipating, though as he says, he’s never had a focused game plan when it came to music.

“I’d love to always be doing what I really love,” Mount says. “I’d love to do more production and create a sound for an artist. My expectation for the group is one that it constantly changing. You know, as far as our fans and the people are concerned, so long as they like what we’re doing we’ll keep going. It’s where your fans want to take you. I never had any specific goals. It’s always been the will of the people. With that, it’s pretty impressive to come this far.”

Metronomy’s latest tour takes them back and forth between North America and Europe, with stops in San Francisco, where they’ll be playing this Saturday at the Fillmore. It’s a stop Mount is particularly looking forward to, as he finally has a day to explore the city.

“I’m pretty excited for our SF stop. I’ve actually never had a day off there but it seems like a really great city,” Mount says.