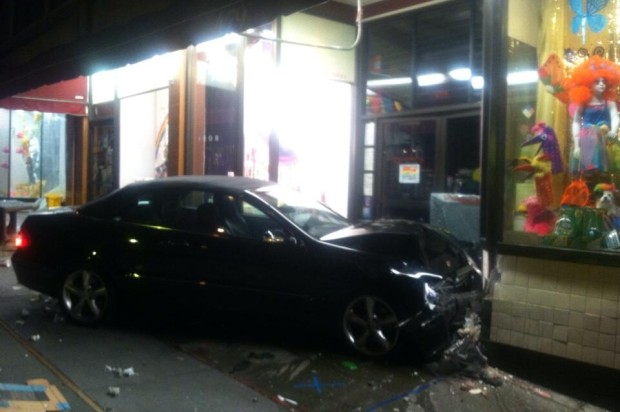 1:34 PM: A store in San Francisco’s Castro District partially reopened this morning despite some structural damage caused by a hit-and-run crash into the building.

A driver in a black Mercedes-Benz convertible rammed into Cliff’s Variety store at 479 Castro St. around 5 a.m., according to police.

Police said the driver ran from the car and remains at large.

The storefront and children’s section of the craft, tool, art and general supply store were damaged in the crash, according to store general manager Terry Asten Bennett.

Asten Bennett said several windows were broken, the entryway was crushed and an interior wall was pushed back.

She said the toy counter was also hit and the toy aisles have been cleared and are closed for repairs.

No one was at the store, which was scheduled to open at 9 a.m. Instead, workers cleaned up debris from the crash and opened the doors closer to 10:30 a.m.

Asten Bennett said it was miraculous that no one was injured and that there weren’t any transients sleeping in the doorway, which is a common occurrence.

9:59 AM: A longtime business in San Francisco’s Castro District is closed this morning after a hit-and-run crash into the store.

Cliff’s Variety store at 479 Castro St. is closed because of a Mercedes-Benz that crashed into the building around 5 a.m.
According to police, the driver then fled on foot and remains at large.

The storefront was damaged but no injuries were reported, police said.

An outgoing message on the store’s phone line this morning said, “We are now closed due to a car smashing into the front of the store. We are not sure what time we will be able to open. We will open as soon as it is safe.”

The store usually opens at 9 a.m. on Mondays.

6:04 AM: Officers are investigating a hit-and-run crash in San Francisco after a car slammed into a popular business on Castro Street, police said.

Witnesses told investigators the driver crashed into the business and fled the area on foot.

The outside of the business was damaged in the crash, but no one was seriously injured.