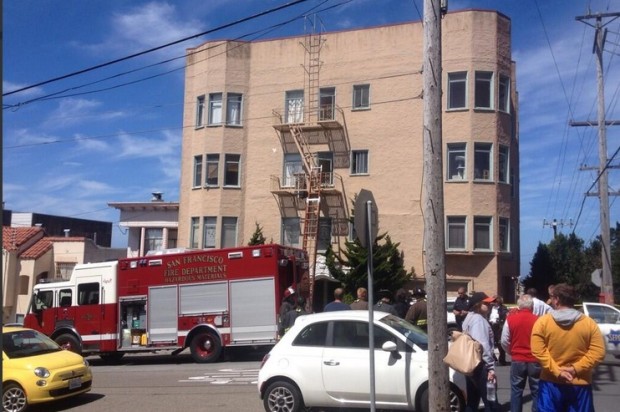 12:46 PM: A man was found dead at a home where there was a possible hazardous materials incident in the city’s Outer Richmond neighborhood this morning, according to police and fire officials.

Emergency personnel responded around 8:50 a.m. to an apartment building near 43rd Avenue and Clement Street for a well-being check.

After a building manager let officers into the building, emergency crews were concerned about possible hazardous materials that had been exposed, police spokeswoman Sgt. Danielle Newman said.

The apartment was evacuated and the building is being aired out before police and the medical examiner can continue their investigations, Newman said.

10:57 AM: San Francisco firefighters and police responded this morning to a possible hazardous materials incident that has resulted in the death of one person in the city’s Richmond District, a fire official said.

Authorities responded around 8:50 a.m. to a well-being check requested at an apartment building near 43rd Avenue and Clement Street, the fire official said.

A male was found dead inside and police and fire crews requested that a hazardous materials team respond to the scene, according to the fire official. She did not know what exactly was found at the home.

Residents have been evacuated from the building and 43rd Avenue is closed between Geary Boulevard and Clement Street, the fire official said.