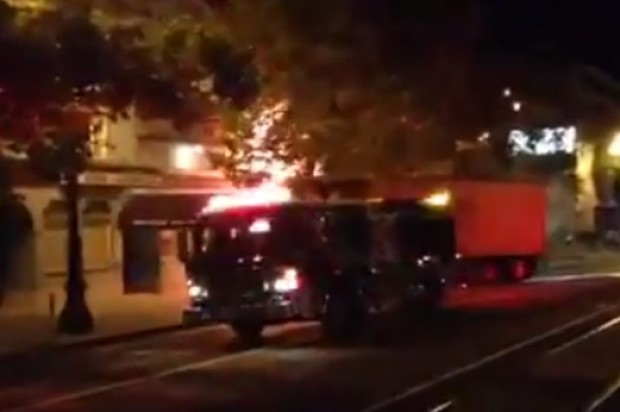 A big-rig was removed this afternoon after it crashed into a funeral home and sparked a fire in San Francisco’s Castro District early this morning, authorities said.

The truck was heading west on Market Street around 12:30 a.m. when the hood of the truck flew open and the driver heard a bang. The driver then lost control of the truck and crashed into a building near Market and Sanchez streets, according to police.

The truck and building caught on fire and fire crews responded to the two-alarm blaze around 12:35 a.m., according to fire spokeswoman Mindy Talmadge.

The truck had crashed into the front of Sullivan’s Funeral Home and Cremation Services, located at 2254 Market St.

Crews worked to remove 150 gallons of diesel fuel from the 18-wheel truck all morning, according to police.

San Francisco Municipal Transportation Agency spokesman Paul Rose said the cleanup had ended and the truck was removed around 12:15 p.m.

Sullivan’s owner Jim Sullivan said this morning that most of the damage to the funeral home was caused by the fire, not the crash.

Sullivan said there are about five broken windows, three broken doors and some problems with the building’s roof.

“It looks major, but it’s not,” he said. “There’s no structural damage.”

He said meetings with families have been moved to the company’s two other locations in Daly City and on San Francisco’s Valencia Street.

The truck driver, a 45-year-old man, and his 28-year-old male passenger were both transported to San Francisco General Hospital with injuries not considered life-threatening, according to police.

One of the men suffered a broken leg in the crash, police spokesman Officer Albie Esparza said.

Based on a preliminary investigation, the crash is considered accidental and the driver has not been cited or arrested, Esparza said.

Regular service on the F-Market & Wharves Municipal Railway streetcar line was able to resume after the crash scene was cleared, according to Rose.

Shuttle buses had been in place carrying passengers on Market Street between Church and 11th streets throughout the morning.