San Francisco’s Adorable Baby Falcons Need You To Name Them 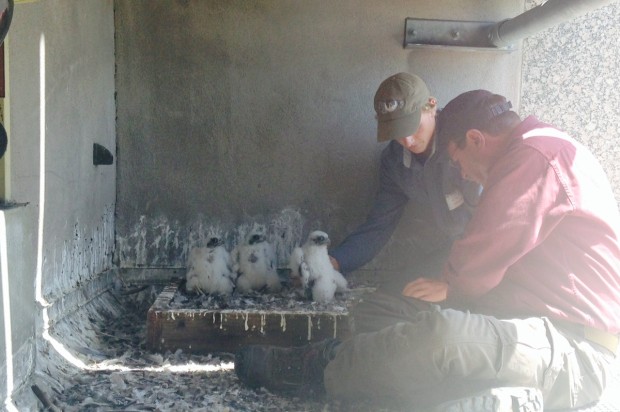 Bird researchers learned today that the three peregrine falcon chicks that hatched on the 33rd floor ledge of the PG&E building in downtown San Francisco are all girls.

At 11 a.m., Glenn Stewart, director of the Predatory Bird Research Group at the University of California at Santa Cruz, headed up to the ledge of the building at 77 Beale St. and banded the 25-day old chicks, known as eyasses.

The parents, Dapper Dan and Cher, incessantly squawked at the intrusion as Stewart and his assistant, along with a small group of reporters, gathered near the nestbox nestled into the corner of the protected edge of the building facing the Bay Bridge.

Stewart was able to place the bands on the birds’ legs and determine the sex of the birds in about 20 minutes. He said they were in “robust health.”

The bands—one from the U.S. Fish and Wildlife Service with a number to call if someone finds a peregrine, and the other an ID band to help researchers track the birds—do not bother or interfere with the falcons, which are expected to start fledging, or attempt to fly, in about three weeks, according to Stewart.

The three girls, whose feathers are still developing, are dependent on their parents to bring them food—which mostly consists of captured pigeon.

Stewart said the fledglings’ first attempts at flight will likely be unsuccessful and his team will bring the birds to the nest if they end up on the sidewalk unable to fly back up 33 stories.

“They need an elevator ride to the roof to be returned to parental care,” he said.

Peregrine falcons “live up in the air” and rarely come close to sidewalk level, Stewart said.

“The Bay Area is a rich area for peregrines” with a variety of food options and “nice cliffs” or tall building ledges, he said.

The falcons have been returning to the PG&E building since 2004. Last year there were no baby chicks born. This year, four of three eggs hatched.

There are only about 250 falcon pairs throughout California, which is a massive increase compared to the 1970s when the birds were critically endangered and there were only two known pairs.

Thanks to conservation efforts, the birds are no longer considered endangered.

In the greater Bay Area, there are believed to be about 40 pairs, Stewart said.

Just last week, Stewart banded two male and two female eyasses at the top of the 18-story San Jose City Hall building.
Those chicks were born in the beginning of April to parents Clara and Fernando.

Stewart called the peregrine falcon “the fastest animal on the planet,” reaching speeds of up to 300 mph while diving for food.

Live falcon footage is available at www.scpbrg.org, where anyone catch the birds’ actions while they nest, feed and rest atop the San Francisco and San Jose buildings.

A naming contest for the three San Francisco chicks starts today and will continue on PG&E social media pages until the end of next week, company spokesman Jason King said.

The top 10 names will be selected and the researchers will pick three for the baby birds.