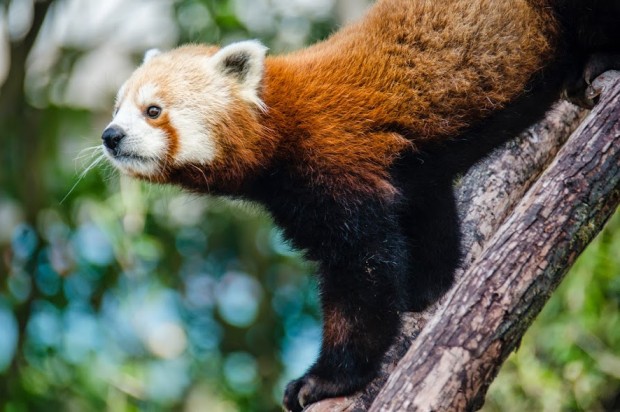 The newest addition to the San Francisco Zoo is a red panda who has been named Tenzing, zoo officials announced today.

Resembling more a raccoon than a bear, the new creature has been named Tenzing, after the famous Nepali Sherpa Tenzing Norgay, who scaled Mount Everest in 1953 with Sir Edmund Hillary.

The red panda was named by Bay Area philanthropists Barry and Marie Lipman at a ceremony this morning.

Lipman won the naming rights of the red panda from a $31,000 bid made at the zoo’s annual fundraising gala on April 25.
Little Tenzing was born at the Sacramento Zoo and is 10 months old. He will be on view at a new zoo exhibit called the Red Panda Treehouse starting Saturday.

The treehouse was designed by Animal Planet TV star Pete Nelson of “Treehouse Masters.” Nelson’s crew was invited to build the red panda’s new home, which was completed in two days in March.

The show featuring the design and construction of the new structure will air on June 6.

Tenzing is apparently outgoing, which is unusual for the solitary, shy species that is vulnerable in its native China, Nepal, Myanmar and India. The animal is often hunted for its thick red pelt.

The species feeds on bamboo shoots and leaves, but also eats roots, fruits, eggs or small reptiles, according to zoo officials.

Visitors can see Tenzing in his new home starting at 10 a.m. Saturday. Members have an hour preview at 9 a.m. To celebrate Mother’s Day, any mothers who bring in children on Sunday get free admission to the zoo.