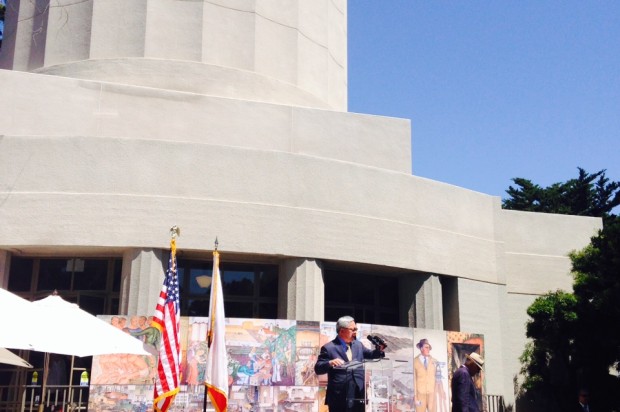 After a nearly six-month shutdown for renovations, San Francisco’s iconic Coit Tower reopened this morning to much fanfare on the top of Telegraph Hill.

San Francisco Mayor Ed Lee was one of many city leaders who helped cut the ribbon in front of the 80-year-old tower that reopened after closing in late November.

The closure of the 210-foot structure was part of a $1.7 million restoration project overseen by the city’s Recreation and Parks Department and Arts Commission.

The second phase of upgrades followed roof repairs from more than a year ago and was timed to avoid peak tourist season.

The preservation efforts came after Measure B passed with 54 percent of the vote in June 2012. The measure limits private and commercial use at the space and redirects concession funds to help with upkeep at the site.

The community organization Protect Coit Tower was a key supporter of the measure, which called for repairs to the aging tower and peeling murals.

The renovations on display today included repairs to cracks on walls, door and window replacements, mechanical upgrades to the elevator and other parts of the building, along with plumbing and lighting enhancements.

The repairs also include better accessibility, a new gift shop and restoration of the famous interior murals by the San Francisco Arts Commission.

The conservation team revived the aging frescoes painted in 1934 by a group of Public Works of Art Project artists. The murals depict happenings around San Francisco, working-class life, the labor movement and the impacts of the Great Depression.

Lee told a crowd seated under the unusually hot sun near the southside steps of the tower that convincing city leaders to restore Coit Tower was as easy as triggering nostalgia for the beloved spot.

“These are historic landmarks in the city,” he said. “We have the privilege of reintroducing them. They are a reminder of the Great Depression and our diversity.”

Before he used giant gold scissors to cut a red ribbon in front of the tower, Lee said, “You will always be looking at this great tower.”

Coit was a well-known San Francisco volunteer firefighter in the late 19th century despite her gender, who gave a portion of her estate to build the monument after her death in 1929.

Another firefighter memorial dedicated to Coit was erected at the nearby Washington Square Park also in 1933. The sculpture is of three firefighters.

“Thank you for bringing back this beautiful place in the city’s history,” Hayes-White said.

San Francisco Supervisor David Chiu, whose district includes Telegraph Hill, called the area a “special place” and reminisced about first moving to San Francisco 18 years ago and running to the top of Telegraph Hill every Sunday.

The city’s Recreation and Park general manager Phil Ginsberg said he was “overcome with exuberance” during the reopening ceremony, recognizing the efforts to preserve the tower through various agencies, community groups and leaders.

“It’s important to preserve the cultural heritage of this city,” he said. “This monument has great historical meaning and context.”

Lillie Hitchcock Coit even made an “appearance” in the form of costumed Bay Area socialite Donna Huggins, complete with an old-fashioned firefighters helmet.

Firefighters cooked up hot dogs and hamburgers on a massive grill after the ceremony, while attendees and some lucky tourists were able to take the elevator to the top of the tower to behold 360-degree views of the city.

Tickets for the elevator ride are usually $7, while the lobby area is free to enter during business hours to view the murals and visit the gift shop.