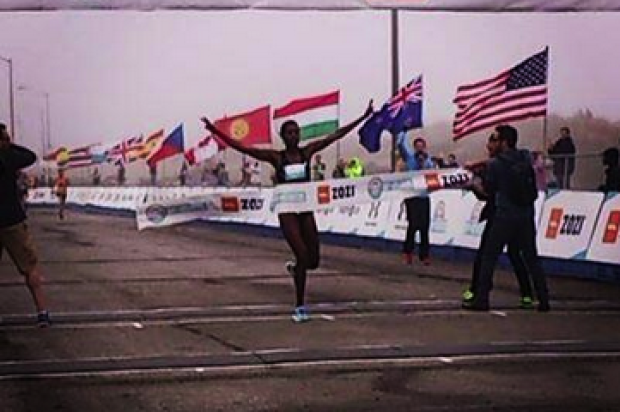 One person was also arrested during an incident at the bison paddock in Golden Gate Park, Esparza said.

The San Francisco Department of Public Works reported via Twitter this afternoon that their crews wrapped up their clean-up efforts around 3 p.m., collecting 10.49 tons of trash on the race route.

That does not include trash left on surrounding streets, in public parks and on private property.

At least three injured people were taken to the hospital for treatment, a low number compared to the roughly 40,000 people who participated in the 7.46-mile race, city Department of Emergency Management spokesman Francis Zamora said.

Owners of the race, the Wasserman Media Group, estimated that about 100,000 spectators also would show up along the race route.
The Bay to Breakers race through city streets debuted in San Francisco in 1912. It runs from Howard Street and The Embarcadero downtown west past Golden Gate Park to Great Highway at Ocean Beach.

“I think we are pleased with the way it has gone,” Zamora said after the race concluded at around 11 a.m. this morning.
“It’s a San Francisco tradition,” Zamora said. “We look forward to doing it next year.”

Police are expected to release final tallies of arrests, injuries, runners who were stopped due to nudity and other information on Monday, according to Esparza.

Prior to the race, the Wasserman Media Group announced a 20 percent increase in security personnel and the installation of extra fencing along the route this year to ensure the safety of racers.

About 25 percent more portable toilets lined the route today than last year in an effort to prevent participants from relieving themselves on city streets, the group said.

Race organizers also prohibited participants from possessing alcohol on the course and banned most backpacks except those that were made of clear material and up to 8.5 by 11 inches in size. They also did not permit wheeled objects, floats, baby strollers or skateboards.

Today’s race included the usual mix of runners and walkers, many dressed in outlandish costumes and some in stages of undress.
A small number who ran nude or bottomless had photos or short videos of them taken by spectators who posted them on social media sites Twitter, Instagram and Vine.

The race did not begin at the scheduled 8 a.m. start time due to equipment still being installed on city streets for the race, postponing the event for about 25 minutes, according to police.

By about 9 a.m., Geoffrey Kenisi was the first male and Diane Johnson (photo above) the first female to cross the finish line, race officials said.

Costumed participants remain in the Golden Gate Park area, but most streets have reopened to through traffic.