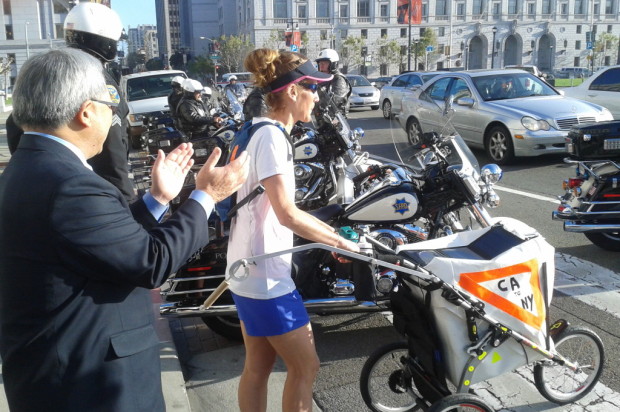 Endurance athlete Jessica Goldman ran off from San Francisco City Hall this morning for a cross-country run to New York City that she hopes will break a world record and raise money for the treatment of traumatic brain injuries.

Goldman seeks to make the trip in a record 63 days to arrive on the steps of New York City Hall on June 18.

Mavis Hutchinson set the women’s Guinness World Record for a cross-country run at 69 days in 1978 but Lorna Michael of Florida completed the run in 64 days and holds an unofficial record.

San Francisco Mayor Ed Lee, speaking at a brief ceremony to see Goldman off this morning, asked her to give his regards to New York City Mayor Bill de Blasio when she arrives.

Lee said Goldman is not only an “exceptional athlete” but also “someone who has a world-class heart” because she is running to raise money for the Brain Injury Association of America.

She said such injuries can cause victims to not know the difference between a toothbrush and a hairbrush, or which goes on first: shoes or socks.

Goldman pointed out that brain injuries most visibly affect NFL players, but that they are also a problem for veterans returning from war.

“What is going to keep me motivated on a daily basis is people going on my donor page and making donations,” she said before departing this morning.

A native of New Hampshire, Goldman said she grew up in a town with only one traffic light. Standing alongside Lee on the steps of City Hall, she said “all this attention is kind of amazing.”

As Goldman took off, she was accompanied by the cross-country running team from Mercy High School in Burlingame, which planned to run alongside her for the first two miles.

Goldman plans to camp out along her route, which will start with her running down the Peninsula and then over the pedestrian path on the Dumbarton Bridge. She is carrying all of her supplies in a modified jogging stroller she calls “Thingamabob.”

Her progress is being tracked on her website http://goldmangoesforit.wordpress.com/training-log.