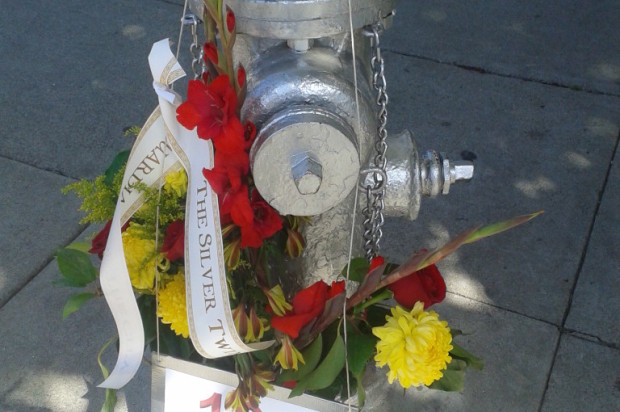 “We have to make sure that we continue to teach the next generation about our history,” said Supervisor London Breed at a ceremony today, calling the hydrants “a symbol of resilience.”

Through every challenge, including the 1906 and 1989 earthquakes, San Francisco “has emerged stronger than ever every single time,” said Breed, who represents the Western Addition and previously served as a fire commissioner.

The newly dubbed “Silver Twin” hydrants, one at the corner of Hayes and Buchanan streets and the other at Ellis Street and Van Ness Avenue, were two of the few hydrants that provided an adequate water supply as firefighters struggled to control blazes that erupted after the large earthquake at 5:12 a.m. on April 18, 1906.

The contributions of those two hydrants were equal to the “Little Giant” hydrant at 20th and Church streets that has been re-painted gold annually since 1969 because its ample water supply prevented fires from spreading deeper into the Mission District, city officials said today.

The recognition of the “extraordinary” Silver Twins was “long overdue,” said retired fire Lt. Bill Koenig, who now works with the first responder historical organization Guardians of the City.

Koenig said only 23 of the city’s 4,213 hydrants had a useful water supply after the 1906 earthquake, necessitating long hose lines to reach the burning buildings — 3,200 feet in the case of the Hayes and Buchanan hydrant.

Fire Chief Joanne Hayes-White, police Chief Greg Suhr, Breed, Koenig, other first responders and community members took turns with a can of silver spray paint to paint the rusty little white hydrant at Hayes and Buchanan, anointing it with flowers when they were done.

Period fire trucks from 1906 were parked on the block during the ceremony and will be on display later today at the annual “Big One” luncheon at John’s Grill at 63 Ellis St.

Commemorative events will continue on the quake’s 108th anniversary Friday, including the annual painting of the hydrant at 20th and Market streets at 5:40 a.m.