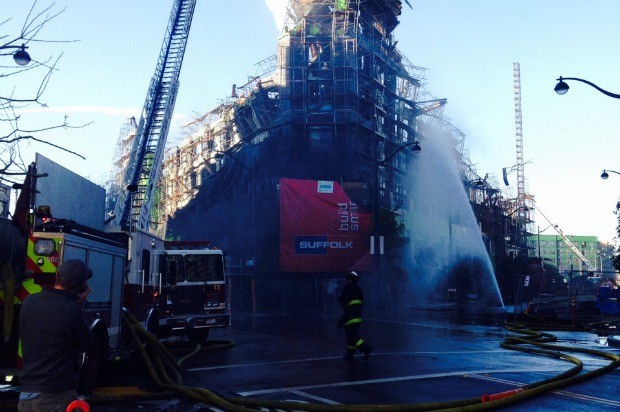 The San Francisco Fire Department released a report this morning finding that a five-alarm fire that destroyed an apartment building under construction in the city’s Mission Bay neighborhood last month was accidental.

The massive blaze was reported shortly before 5 p.m. on March 11 at the site at Fourth and China Basin streets, where a 172-unit building was under construction as part of the MB360 development project by BRE Properties.

There were no fire detectors installed yet in the unfinished six-story building, according to the report.

The building was expected to be ready to start leasing later this year. Another nearby site of the project with 188 units under construction was not affected by the blaze.

The building, which was under construction with building contractor Suffolk Construction Co., was completely destroyed after the fire spread from the top story.

According to the report, the fire was accidentally sparked on the sixth-floor roof area by a hot or smoldering object.

The fire originated in the southeast section of the building between the top floor and the roof, the report states.

According to the report, the fire caused $40 million in property damage at the $60 million construction site.

Additional contents in the building, valued at $100,000, were destroyed in the blaze.

Surrounding apartment buildings were also damaged in the fire and residents were evacuated overnight.

About 30 units were evacuated, with most of the residents living at the Strata at Mission Bay apartments and the adjacent Venue San Francisco apartment building across the street from the fire.

The future home of the Mercy Housing affordable housing project at 1180 Fourth St. sustained an estimated $5,000 in damage.
There was $50,000 in damage to a roof at 535 China Basin St.

There was no serious damage at the University of California at San Francisco Smith Cardiovascular Research Building at 555 Mission Bay Blvd. S. after embers from the blaze landed on the “living roof” and ignited some grass.

Two firefighters were injured battling the flames and smoldering mass overnight and into the following day.

According to Fire Chief Joanne Hayes-White, one firefighter suffered burns to his face. The injury was not serious.

A battalion chief also suffered a minor ankle injury, according to a fire spokeswoman.

The day after the fire, Suffolk, the construction company, brought in equipment to pull apart the gutted building, parts of which were threatening to collapse, fire officials said.