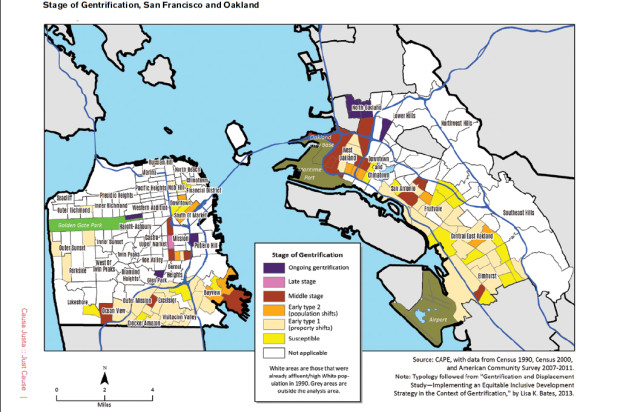 As the median income of neighborhoods in Oakland and San Francisco has gone up over the last 20 years, their demographics have shifted dramatically, with more white and less black residents, according to a report released this week by the housing activist group Causa Justa.

The proportion of black residents has been declining substantially and among those remaining, there is less home ownership and more renting in gentrifying neighborhoods, according to the report released Monday using data largely compiled from the Alameda County Public Health Department.

For example, 76 to 78 percent of black residents rented their homes in gentrified neighborhoods in 1990, but 100 percent rented in 2011. Meanwhile, white home ownership in the same areas has increased.

This effect, the group argues, is largely the result of shifts in economic production in urban centers across the U.S., from a manufacturing economy to one focused on finance, service and technology.

The group argues that urban centers are becoming increasingly affluent as cities become the centers of technological innovation, employing a highly paid class of workers who covet living in cities and have the income to afford higher rents.

Meanwhile, lower-income residents in urban centers are being pushed out through higher rents and evictions and are relocating to suburban areas, according to the report.

That kind of forced displacement can have impacts on the health of the people pushed out, including through loss of access to services, longer commutes, and the stress of slowly being pushed out of their neighborhoods through rising rents or eviction, the group argues.

Residents who stay may move in together to save money in the face of rising housing costs, leading people to share overcrowded apartments.

Public health data shows that more than 15 percent of residents share a room in neighborhoods that Causa Justa identified as being in the late stages of gentrification, such as San Francisco’s Mission District.

While acknowledging the demographic shifts may be due at least in part to voluntary relocation by individuals, Causa Justa’s report concludes that external political, social and economic factors are responsible for the overall shifts in the composition of the Bay Area’s urban neighborhoods.

The analysis was done through a comparison of Bay Area neighborhoods between 1990 and 2011 using methodology drawn from a 2013 study conducted by the city of Portland.

The methodology compiles demographic, economic, and property data and analyzes the information based on census tracts and identifies different stages of gentrification.

The report concludes by outlining policy suggestions for mitigating or stopping gentrification, including stricter code enforcement for landlords, protections for tenants against evictions and harassment and greater outreach for tenants to understand their rights as renters.

Also recommended are citywide approaches to ensuring that affordable housing units remain in affected neighborhoods and cities despite the demolition of existing housing for higher-priced units.

Causa Justa recommended a “no net loss” policy to prevent decreases in affordable units in this way, requiring construction of as many new affordable units as are lost through renovation, conversion or demolition.

To accomplish that, the group suggests taxing developers working on higher-priced units to help finance the construction of lower-priced ones and providing better government incentives for affordable housing construction.

San Francisco and Oakland city governments have implemented policies advocated by Causa Justa recently, including Tuesday’s passage of an ordinance in San Francisco that would require greater payouts for people evicted under the state’s Ellis Act.

The San Francisco ordinance, which still requires a final vote by the city’s Board of Supervisors, would tie compensation from landlords for evicted tenants to the real estate market.

Meanwhile, the Oakland City Council last month took up the issue of whether to limit the capital improvement costs that can be passed on to tenants, as the city’s laws allowed 100 percent of renovation costs to be passed on to renters, forcing people out with massive rent hikes.