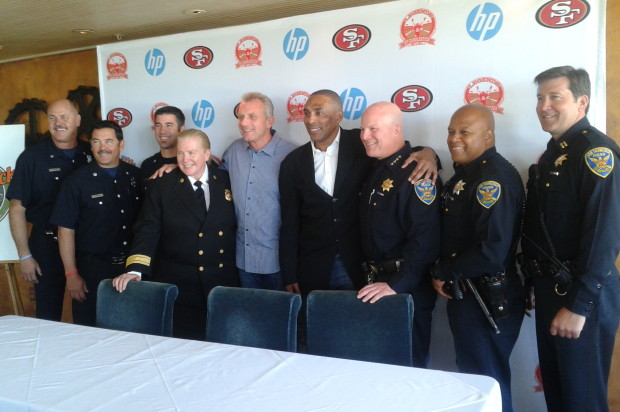 The final football game ever in San Francisco’s Candlestick Park will be played this summer by a team of 49ers greats, led by four-time Super Bowl winner Joe Montana.

Montana, who played quarterback on the 49ers from 1979 to 1992, will suit up once again on July 12 to take on an all-star team led by famed Miami Dolphins quarterback Dan Marino, organizers said at a news conference in the waterfront restaurant Epic Roasthouse this morning.

The 49ers played their last game at Candlestick in December and will debut at the under-construction Levi’s Stadium in Santa Clara for the 2014 NFL season.

Garafalo said that he wanted to put together a fitting send-off for the stadium after organizing similar events at Denver’s Mile High Stadium with quarterback John Elway and at Pittsburgh’s PNC Park with MLB hits leader Pete Rose.

“Who better to lead that charge than Joe Montana?” Garafalo said.

Joining Montana will be other 49ers greats including wide receivers Jerry Rice and Dwight Clark and running back Roger Craig.

The flag football game will be just for fun and charity—proceeds will go to support charities run by Montana and Craig as well as the San Francisco Fire Department’s toy program and the Police Department’s summer jobs for at-risk youth program.

But Craig, who played in the Denver send-off game, said that once the game gets going “the competitive juices start flowing” and it may not be just a flag football game anymore.

Montana said that players may walk into the game not caring who wins, but after halftime “things kind of change—no one wants to lose at that point.”

He said that he anticipates a side-bet with Marino, but that he doesn’t expect the rivalry to get too heated.

“Danny (Marino) and I are pretty good friends,” Montana said. “I see Danny a lot.”

The roster for Marino’s team is still coming together, but Garafalo said it will include former Los Angeles and Oakland Raiders wide receiver Tim Brown and Cleveland Browns cornerback Eric Wright.

“It will be a great, great roster we’re putting together,” Garafalo said.

One challenge in recruiting players is finding players that are still able to run and play without risk of injury. Craig said Hall of Fame secondary player Ronnie Lott has problems with his back, but he was still optimistic that Lott will play.

Prior to the Montana/Marino matchup, San Francisco police and firefighters will face off in a flag football game of their own and have put a bit more than their pride on the line.

Police Chief Greg Suhr and Fire Chief Joanne Hayes-White said that the losers will have to prepare and serve a meal at Epic Roadhouse for the winners.

“The fire department’s got their heart set on cooking for us,” Suhr said, but Hayes-White said Suhr is a “big talker” and “we’ll come out on top.”

Still, they both acknowledged that there are better cooks in the fire department.

Suhr and Hayes-White said they both come from a football background and are ready to play in the game. Suhr, who said he will play linebacker, was coached in the 1970s at City College of San Francisco by Hayes-White’s brother, an offensive coordinator there.

Hayes-White said she has quarterback genes in the family—her brother played quarterback and now her son plays quarterback at Sacred Heart Cathedral Preparatory school in the city.

The police vs. firefighters game will be held at 4:30 p.m. on July 12, followed by the Montana/Marino game at 7 p.m. Tickets will cost between $30 and $50 and go on sale May 5 for 49ers season ticket holders and on May 10 for the general public through Ticketmaster.