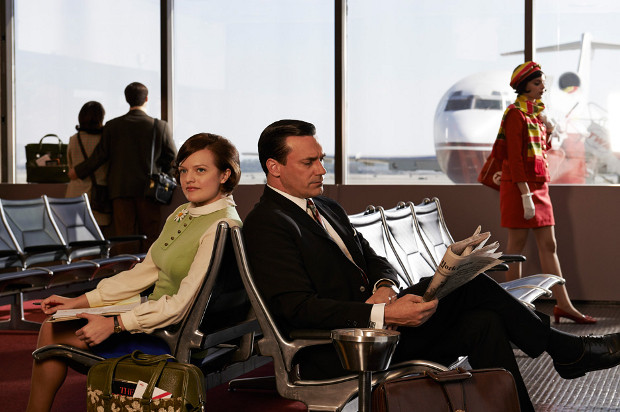 Still reeling from the How I Met Your Mother Finale? We understand, we totally understand. That’ll show us not to get emotionally invested in anything ever again, huh?

What the HIMYM finale unfortunately demonstrated was the danger in being absolutely beholden to an established mythos, leaving slender wiggle room to course-correct when someone as enchanting as Cristin Milioti joins your cast. The opposite: something like LOST, which was derided for not knowing what the endgame was from the start. Let this be a lesson for all of us! If anything, this final season was really just a season of America falling in love with Cristin Milioti, who needs her own sitcom, STAT.

Monday, April 7
NCAA Men’s Basketball Championship (6pm, CBS)
After countless lost dollars in productivity, number 7 ranked Connecticut and number 8 ranked Kentucky made it to the the Last Dance (I don’t know if they call the final game that, but if the entire tournament is referred to as the Big Dance, then yes, I can make a Donna Summer reference). After this game, using fairy tale narratives to explain men’s basketball are over and gender polarity is re-normalized.

Kitchen Casino (9pm, Food Network, series premiere)
You’ve already seen this show. It’s another faceless cooking competition show on the network that forced Guy Fieri on us, only with a casino/gambling theme. Much like every awful casino night school fundraiser you ever went to! Hosted by Bill Rancic, of ‘hey you were the first winner of the Apprentice’ fame and ‘oh hey you’re married to that one E! reporter and you were on that reality show with her’ fame. The only reason this is included this week is because the pilot episode is named ‘High Steaks’ and get it a steak is food, and it sounds like stakes, which is what people talk about when gambling! (Also note: The pilot episode of Good Eats was named ‘Steak Your Claim’ so steak puns are absolutely established in the Food Network wheelhouse.)

Tuesday, April 8
Justified (9pm, FX, season finale)
Michael Rapaport’s southern “drawl” as small time Florida crime patriarch Darryl Crowe Jr. this season has been sufficiently lodged into my dome piece for the rest of time. The highly acclaimed FX drama ends its penultimate season doing what Justified does best (as setup with last week’s penultimate episode), a bunch of people with multiple agenda on a collision course as every quip and retort falls like shell casings. This season has felt a little shaggy dog and jam session-y with themes from previous seasons re-explored (familial bonds, carpetbagging, being full of bullshit), but much like pizza, even when Justified isn’t great, it’s still really, really good. Note to self: Before Justified wraps up next year, buy a Stetson.

Thursday, April 10
Suits (9pm, USA, season finale)
With USA cancellation of White Collar, Psych’s ending a couple of weeks ago, and the series finale of Burn Notice last autumn, is the light and breezy legal drama USA’s new shine show? Will it help champion a new age of shows on the network, which is light and breezy, but with a veneer of smarts? And not just riffs on 80’s shows? Which wasn’t bad at all, trust. On that note, hey, just saying, the time is ripe for a Silk Stalkings reboot.

The Challenge: Free Agents (10pm, MTV, season finale)
The Real World/Road Rules Challenge used to mean something (remember when Puck hosted the second season in 1999 in San Francisco?). Now just known as the Challenge, all it is is a way for juice heads and drunkards to make money in between going on the club hosting circuit. This season’s theme/gimmick/subtitle is Free Agents. Which reminds me of the dumb ass names MMA promotions would name their events.

Friday, April 11
The Neighbors (8:30pm, ABC, season finale)
The fact that the much derided sci-fi sitcom (which used its negative press in its own promotion) made it past the culling of last year’s television season is confounding enough. The fact that the sci-fi sitcom was able to make to the end of a second season in its Friday Night Death Slot placement is almost inspirational. Or baffling. No word on if we will be talking about this show in the fall for a third go around, but honestly? That’ll do pig, that’ll do.

Saturday, April 12
Death Clique (8pm, Lifetime)
When in doubt on Saturday night, chances are that Lifetime will be airing one of its own movies. I don’t even know what to call this genre (besides Lifetime Movies), but they are like b-movies for true life events? Death Clique is based on a true story. Which must be about a clique. THAT KILLS.

Sunday, April 13
2014 MTV Movie Awards (9pm, MTV)
Growing up in the 90’s, the MTV Movie Awards meant that the school year was ending and that summer was an optimistic inevitability. Ben Stiller and Janeane Garofalo’s hosting duties in 1996 will live on forever in my mind. The MTV Movie Awards are now really just a shill parade for hashtags and Pepsi and reboots and adaptations of movies already made. And I could sit here and decry and snark and smarm, but maybe it’s better to internalize that this isn’t for me anymore, and that’s okay. But at least Conan O’Brien is hosting this year.

Nurse Jackie (9pm, Showtime, season premiere)
Edie Falco’s darkly comic (although Falco maintains that she isn’t funny) portrayal of the titular New York City nurse, and her struggles with addiction, sobriety, and the high wire act of looking sober while actually not has already been re-up’d for a seventh season.

Mad Men (10pm, AMC, season premiere)
Much like a clingy significant other who cannot let go because they know their prospects out in the world won’t get any better, AMC will be splitting up the final season of the acclaimed period drama into two parts. So while this is the boozy, womanizing, existential show’s last season, the actual series finale will not air until next year. While you count down the end of the 60’s in the Mad Man universe, marvel at some of the posters legendary graphic designer Milton Glaser designed for the show’s final hurrah. Also, ICYMI, here is a 25 year old Jon Hamm on the USA dating show “the Big Date” hosted by perennial host Mark L. Walberg.