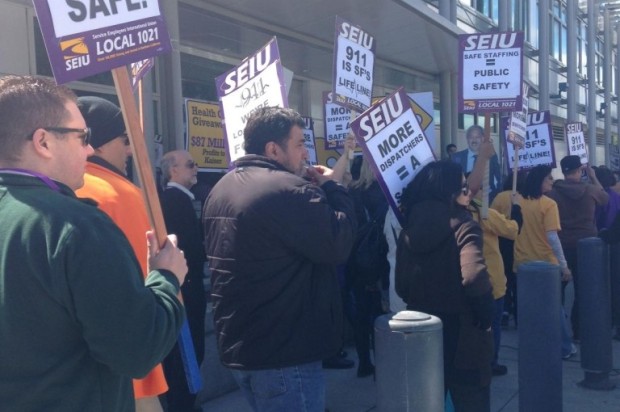 Emergency dispatchers rallied in front of the San Francisco Department of Emergency Management building in the city’s Western Addition this afternoon to call on the city to hire more dispatchers to pick up 911 calls.

Dispatchers, who are represented by Service Employees International Union Local 1021, and their supporters gathered in front of the building at 1011 Turk St. around 1 p.m. to call attention to what they consider a public safety risk when not enough dispatchers are available to answer incoming 911 calls.

The crowd of about 50 protesters carried posters and chanted, “Public safety is under attack” and other slogans outside the department headquarters.

According to SEIU 1021 members, about 60 percent of fire, medical and police calls that come in take more than 10 seconds to reach a dispatcher.

Ron Davis, who has been a 911 dispatcher for 13 years, told the crowd, “It’s a sad day when emergency dispatchers have to put people on hold.”

He called “inadequate staffing” an “injustice” and claimed it puts “people’s lives in danger.”

He said the department survives on a bare-bones staff that is required to work overtime, which adds to burnout from the high-stress job.

“When you work your workforce to the bone that only gets worse,” Davis said, referring to high turnover rates and workers calling in sick.

The city’s Department of Emergency Management spokesman Francis Zamora said there are 167 dispatch staff members, including management and supervisors, with 10 more dispatchers in training this year.

Last year, San Francisco Mayor Ed Lee allotted a portion of the city budget for a training academy, which is a year-long process set to put the new recruits into a fulltime position at the start of 2015.

Zamora said the dispatchers are performing “life-saving work” and lauded how they handle emergency calls.

He said staffing is based on call volume. There are on average 1.2 million emergency calls made each year in San Francisco, which breaks down to about 3,000 calls per day.

According to Zamora, the dispatchers meet response time standards that the city sets.

“Does that mean dispatchers are working hard? Yes they are,” he said.

He acknowledged that sometimes they have to work overtime to meet those goals.

He said the department has worked since 2008 to reduce overtime hours by 50 percent, and is looking to hire more dispatchers through the training program in future years.

D. Maxwell, a city dispatcher for 20 years, said usually there are 10 to 12 dispatchers at the communication center to answer 911 calls, with numbers dropping overnight and into the early morning hours.

She said the city needs to hire more dispatchers as the population swells and San Francisco becomes even more of a tourist destination.

Next week the department will be recognizing dispatchers as part of National Public Safety Dispatchers Week, Zamora said.