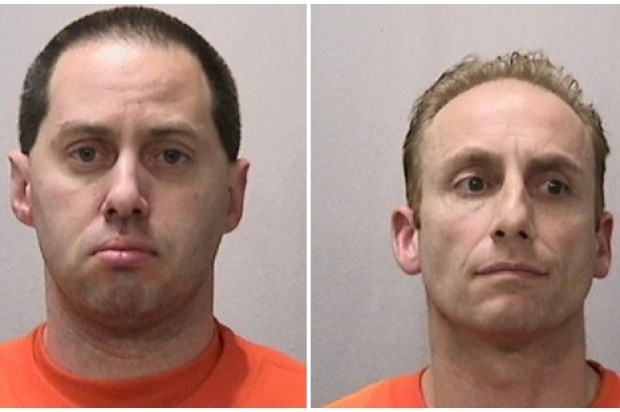 Police arrested San Pablo resident Sean Patrick Gunther (above left), 37, and Pacifica resident Marc Steven Ormando (above right), 47, last Thursday after search warrants were executed at both of their residences and explosives were located, according to San Francisco police Sgt. Danielle Newman.

San Francisco police began an initial criminal investigation into one of the suspects on an unrelated charge a couple months ago. The investigation led police, the FBI, U.S. Marshals and the Marin County Major Crimes Task Force to the homes in Pacifica and San Pablo, Newman said.

At Ormando’s home, police found a large cache of explosives, 17 firearms including handguns and rifles and a large barrel of chemicals used to manufacture explosives, police said.

Additional explosives and illegal narcotics were found in Gunther’s residence during the search, Newman said.

Over 600 explosive or destructive devices, as well as bulk material consistent with making pyrotechnic or flash powder, were located during the search, Newman said.

The possession and manufacturing of explosives at these residences was a major public safety issue, Newman said.

Both Ormando and Gunther were charged with 16 counts pertaining to the possession, sale or transportation of a destructive device, according to the San Francisco district attorney’s office spokesman Alex Bastian.

Gunther was also charged with possession of methamphetamine. His bail is set at $1.5 million, according to Bastian.

According to Newman, Ormando was also arrested on suspicion of child endangerment, but the district attorney was unable to confirm that charge.

Ormando’s bail is set at $2 million, according to the district attorney’s office.

District attorney’s office spokesman Alex Bastian said the case is in the process of being transferred to San Mateo County.