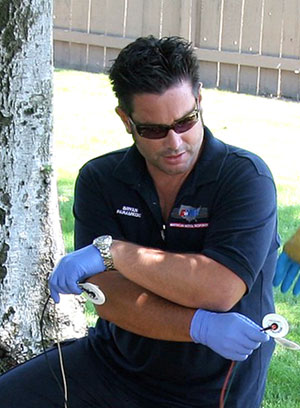 Stow, 45, a Santa Cruz paramedic and father of two, was attacked from behind walking through the parking lot after the Giants lost to the Los Angeles Dodgers at the opening day game on March 31.

Stow, who was kicked repeatedly in the head, suffered severe injuries in the beating, including brain damage. His brain injuries have left him with speech and memory problems, along with physical setbacks, and he will require assistance for the rest of his life.

In the days following the attack, a portion of his skull was removed because of swelling in his brain.

He spent most of the past few years receiving treatment at San Francisco General Hospital and other local rehabilitation facilities. He continues to receive home care from family members.

On a website his family maintains with updates on Stow’s condition, his family wrote last month, “We are coming up on (three) years since this happened and it’s hard to believe the support and prayers that Bryan still gets to this day. We cannot thank you guys enough for helping Bryan and us through all of this.”

Over the past three years, the Giants baseball organization has supported the family through fundraisers, special events and even player visits to Stow’s hospital room.

More recently, San Francisco Giants third base coach Tim Flannery has been donating all proceeds from his band’s newest record.
The coach-turned-guitarist-and-songwriter has helped raise tens of thousands of dollars for Stow with benefit concerts held throughout the Bay Area and elsewhere.

Earlier this month the pair was also indicted on federal weapons charges.

In the March 5 federal indictment, the men, both convicted felons, were charged with possessing two semi-automatic rifles, a 12-guage shotgun, a semi-automatic pistol, a revolver and ammunition at the time of the arrest.