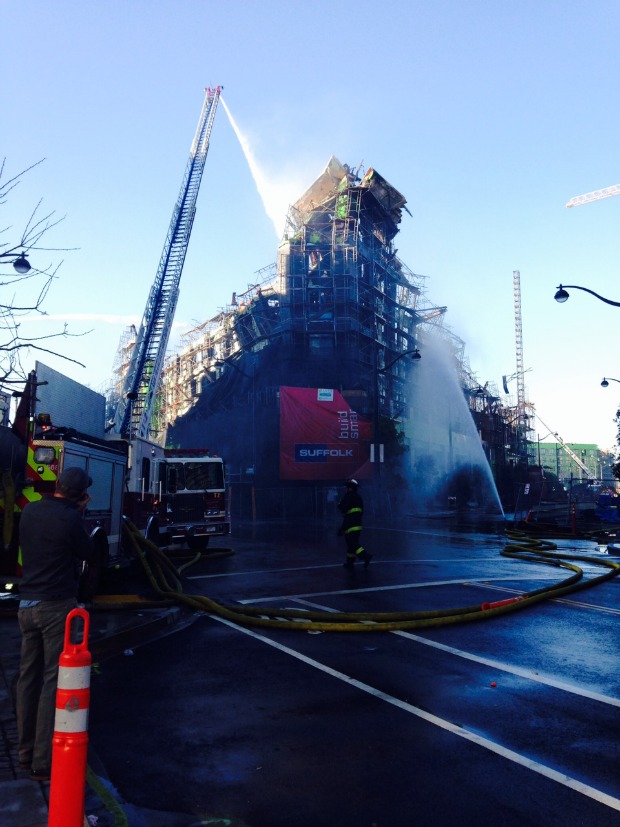 Fire crews are still at the scene of a five-alarm fire that destroyed an apartment building under construction in San Francisco’s Mission Bay neighborhood Tuesday.

As of noon, the fire had not been called under control and firefighters remained at the construction site at Fourth and China Basin streets this afternoon.

Crews have been putting water onto the destroyed building to put out hotspots, but the highly visible flames from Tuesday evening have been quelled.

The 172-unit building was part of a development project by BRE Properties known as MB360. Company officials released a statement Tuesday saying that the building was known as Block 5. Another site of the project with 188 units under construction was not affected by the massive blaze.

The neighborhood smelled of smoke this morning despite strong winds, and water was cascading down the sides of the gutted building and running onto Fourth Street.

Susan Mosk, a semi-retired lawyer and resident at the Radiance at Mission Bay apartment building a few blocks away, said this morning her patio was covered in ash and other debris. Windowsills on surrounding buildings near the site of the fire were peppered with small white flecks.

Mosk had walked over to the building to see the damage from the blaze that she watched burn from the safety of her apartment Tuesday night. She said this was the biggest fire she had ever seen up close.

San Francisco Mayor Ed Lee said at a news conference at the scene this morning that the cause of the fire remains under investigation, but noted that it started above ground.

“They were doing some welding, we don’t know what occurred there,” Lee said.

The building contractor is Suffolk Construction Co. There were several company officials at the site late this morning, evaluating the damage and discussing plans for bringing down the remains of the destroyed building.

Lee said a sprinkler system was being installed at the site but was not yet operational at the time the fire started.

The blaze was reported shortly before 5 p.m. and grew quickly, sending up a dark plume of smoke that could be seen from many parts of the Bay Area. Flames spread and engulfed the building, and there was initial concern that the blaze could spread to other structures.

Lee said he sent a text message to fire Chief Joanne Hayes-White when he saw embers from the fire floating over to a University of California at San Francisco building about a block away.

Hayes-White said, “He personally let me know that he saw a burning ember shift over to the UCSF property and we needed to take care of that.”

A UCSF spokesman said the embers landed on the “living roof” of the Smith Cardiovascular Research Building at 555 Mission Bay Blvd. S., igniting some grass.

He said a police officer and a maintenance worker put out the blaze quickly using fire extinguishers, and there was no damage.

Lee said about 30 nearby residential units had to be evacuated, leaving those residents and their pets temporarily displaced.

Fire Department spokeswoman Mindy Talmadge said most of the evacuated residents live at the Strata at Mission Bay apartments, and all have been able to find temporary housing on their own.

Zoe Solsby, a spokeswoman for Sares-Regis Group, which manages the 192-unit property that was built in 2009, said a team is walking through the evacuated building to “make sure apartments are safe and secure.”

All residents have found temporary housing and staff is working with tenants to assist with any needs, she said.

She said staff is still working to figure out how many units were directly affected and what other damage the building sustained.

About 95 percent of the units are occupied, Solsby said.

She said staff was assessing the damage that mostly affected the front side of the building facing Fourth Street.

An employee at the front desk at the Strata leasing office said this morning that residents were not allowed to return home, but some had come this morning to pick up belongings.

Talmadge said a sprinkler system had gone off in the Strata building and staff were unable to turn it off overnight and water was still coming out this morning.

Solsby said the sprinklers were also being assessed and it was unclear how much damage the water had caused.

Glass from blown-out windows was scattered on the sidewalk in front of the building this morning.

Elana Bennett, a leasing manager at the Venue San Francisco apartment building that sits adjacent to Strata, said the building wasn’t affected by the blaze.

She said only 30 percent of the building’s 147 units are occupied and “some residents did feel uncomfortable with all the smoke.”

Around 5:15 p.m., she said residents evacuated and were expected to be able to return to their homes at some point later today, Bennett said.

The building is brand-new with the first residents moving in only about two months ago, she said.

Supervisor Jane Kim, whose district includes the Mission Bay area, said in a phone interview late this morning that her staff was on-call Tuesday evening, ready to assist any residents impacted by the fire.

She said she was initially concerned that the fire would spread to construction sites at the city’s new public safety building at Third and Mission Rock streets and a Mercy Housing affordable housing project at 1180 Fourth St.

She said there was some smoke damage at the Mercy Housing site, and she is working to see how that will impact construction plans.

She called the fire “really unfortunate” and noted that the incident occurred mid-construction and will stall the addition of more housing options in the city, even if the units destroyed were going to be leased at market rate.

Lee noted that Tuesday’s firefighting efforts were facilitated by a high-pressure water system in Mission Bay that he helped push for when he was head of the Department of Public Works.

“But for that high-pressure water system, this fire would have been perhaps very hard to contain,” he said.

He said the fire could have been a lot worse if winds had been blowing in a different direction or if the structure had collapsed.

Hayes-White said about half of the city’s firefighters responded to the fire, and called their efforts a “phenomenal display of teamwork.”

She said one firefighter suffered burns to his face early on but continued battling the blaze, receiving treatment later for his injuries, which were minor.

“Our objective last night, which we were able to achieve, was to contain the fire to the building of origin,” she said.
Talmadge said a battalion chief also suffered a minor ankle injury.

The blaze has not yet been controlled, and Hayes-White said crews will be at the scene “as long as it takes” to put the fire out.

She said the fire department has been working with the developer, and that eventually heavy equipment will be brought in and the building will be dismantled.

Streets in the neighborhood remain closed this afternoon, and Talmadge said the area is considered a “collapse zone” because of the instability of the building.