Fundraiser Sends, 49er, Senator, And Lou Seal Off The Top Of SF Skyscraper 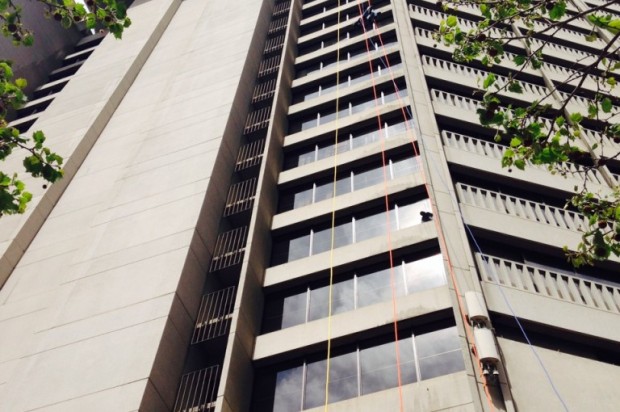 A state senator, a San Francisco supervisor, a former 49ers football player—even the Giants mascot Lou Seal—jumped off a downtown hotel building this afternoon as part of a fundraiser for Outward Bound California.

State Sen. Mark Leno, D-San Francisco, was one of the first participants to rappel the Market Street side of the Hyatt Regency hotel as part of the “City Skyline Challenge” to raise $250,000.

He pushed off the edge of the building strapped into a harness and with a helmet on. Once back on solid ground, he said the trip down was “really thrilling.”

Leno was one of about 100 people, including local celebrities and elected officials, who volunteered or donated to get the chance today and Friday to glide down the 23-story building. The daredevil antics will help support Outward Bound, which offers low-income students outdoor learning opportunities and programming.

Other local celebrities took on the challenge today, including former 49ers offensive linesman Guy McIntyre, who said “it was scary at the beginning” but as he inched his way down he looked over and saw a sweeping view of the Bay Bridge.

He said he had some reservations about jumping off the edge, but after getting connected to Outward Bound through the 49ers Foundation he decided he would do “anything to keep kids safe and on track and in school.”

He called Outward Bound a great opportunity for students to get out into the wilderness and nature.

Supervisor David Chiu came down the side of the hotel to the cheers of a small crowd of onlookers.

He said as he rappelled the building he saw “the most amazing view of my district and our city.”

Chiu’s district includes the Financial District, along with parts of North Beach, Chinatown, Union Square and other northern neighborhoods.

The board president said he was willing to fling himself off a 230-foot building to help the young people who benefit from Outward Bound programming.

Nearly the entire quarter-million fundraising goal had been met by mid-afternoon, with only a couple thousand dollars left to raise for the program, which works with 1,200 participants throughout the state.

In the Bay Area, Outward Bound has partnered with the San Francisco-based Larkin Street Youth Services, giving homeless young adults an opportunity to connect with nature.

Jim Welsh, program coordinator for Larkin Street who was planning to rappel the building as part of the fundraiser, said a group of 12 homeless participants have been able to visit San Francisco’s Baker Beach and other outdoor locations, and more programming is planned to include homeless residents.

The rappelling action continues Friday between 9 a.m. and 5 p.m. with other donors who gave more than $1,500 getting a chance to hang from the top of a high-rise.