Big Bash Thursday Night To Celebrate One Year Of Bay Bridge Light Show, New Push To Keep It Going To 2026 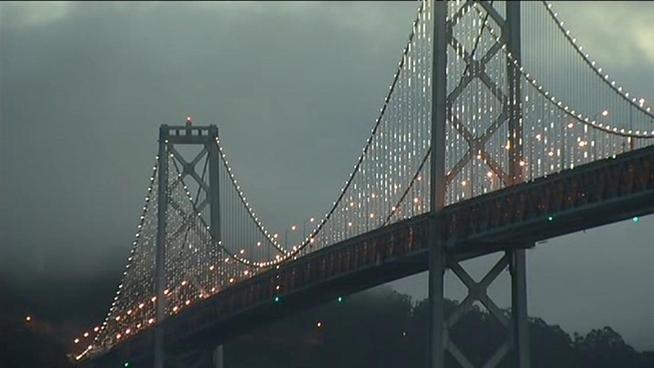 One year after the “Bay Lights” art installation first lit up the western span of the Bay Bridge, a celebration will be held Thursday night along the San Francisco Embarcadero to mark the milestone.

The light show on the 1.8-mile span of the bridge between San Francisco and Treasure Island was first displayed on March 5, 2013, during a grand lighting ceremony.

At the start of the 7 p.m. anniversary event, all 25,000 of the LED bulbs lit a year ago will temporarily go out.

For 10 minutes viewers will notice the darkness, said Ben Davis, founder and CEO of Illuminate the Arts, the nonprofit behind the nightly light show designed by artist Leo Villareal.

It will be an “emotional experience” and a “reminder of what the city is like without them,” he said.

The Bay Lights begin each night at sundown with a non-repeating abstract pattern gliding across the cables until dawn.

After the brief “blow out,” a 7:10 p.m. relighting ceremony will entertain viewers with a 20-minute broadcast on KFOG on 104.5 FM that matches the light show.

At Thursday’s anniversary event, Davis said the organization is kicking off a new fundraising campaign.

First, the group wants to ensure the lights stay on until 2016 after a brief scheduled shutdown next year for Caltrans to perform required maintenance.

He said the installation has to come down then for crews to make sure there is no rust and for paint touch-ups.

Once the show is back up and running, Illuminate the Arts is pushing to raise $12 million to keep the lights shining until 2026, Davis said.

“The idea of not having it there is almost distressing,” he said.

Other festivities are planned this month in honor of the one-year anniversary of the lights.

An anniversary bike ride will kick into gear Friday at 7:30 p.m. at the Cupid’s Span sculpture on the Embarcadero under the glow of the lights.

Illuminate the Arts CEO Davis will participate in the ride along with members of the San Francisco Bicycle Coalition and other cyclists.

Many restaurants along San Francisco’s Embarcadero, including Chaya, Coqueta, MarketBar, Waterbar and Palomino, are donating a portion of customer bills for certain food and drink items to the Bay Lights campaign.

The “Dine and Shine” promotion at participating restaurants runs through the end of the month.

More information about making donations and the Bay Lights anniversary festivities is available at thebaylights.org.