Bay Bridge Bike Path To Close For About A Week 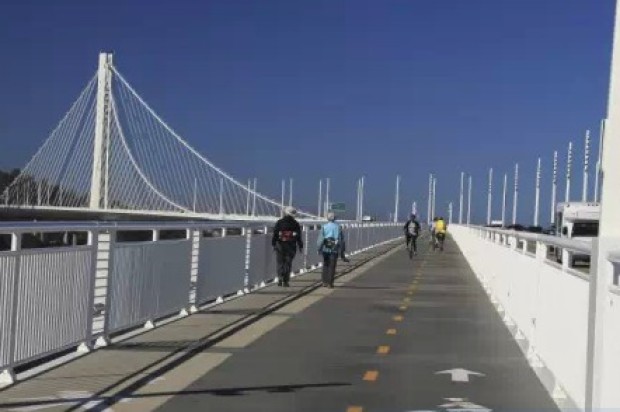 The bicycle and pedestrian path along the new eastern span of the Bay Bridge will be closed temporarily on the evening of March 23, Caltrans officials said today.

Spokesman Andrew Gordon said the reason for the closure is that workers will be replacing the temporary wooden onramp connector that’s been in place since the path opened last Sept. 3 and replacing it with a permanent asphalt connector that will be 3,000 feet long.

Gordon said the path will be closed at 8 p.m. on Sunday, March 23, and reopen by 6 a.m. Monday, March 31, at the latest and perhaps earlier if weather conditions are favorable.

“We will be pouring asphalt, striping lanes, doing some landscaping and putting in some lighting,” Gordon told reporters during a tour of the bike path today.

The permanent onramp won’t be as steep as the temporary onramp, he said.

The bike and pedestrian path currently is about 2 miles long and stops short of Yerba Buena Island because more of the old eastern span must be dismantled before the path can go all the way to the island.

Gordon said Caltrans hopes to be able to extend the path all the way to Yerba Buena Island by the summer of 2015.

He said the hours that the bike and pedestrian path is open will be extended beginning on Saturday.

Gordon said the path’s hours will be extended even longer in late May.

There are two access points that provide a direct route to the bicycle and pedestrian path.

One is at Shellmound Street in Emeryville, just outside the IKEA store, and the other is at the corner of Maritime Street and Burma Road in Oakland.

Gordon said those two trail heads will remain open while the bike path is closed but people won’t be able to go very far west before they have to stop.

However, they can still access other parts of the San Francisco Bay Trail, he said.